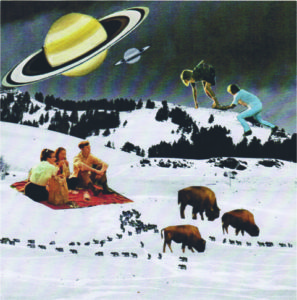 In the last quarter of 2015, Mason Summit left a lasting impression with his third album ‘Gunpowder Tracks’. Exploring various avenues of pop, Americana and folk, the singer-songwriter showed a talent and knowledge of influences that stretched beyond his years. With the world awash with great music in the digital age, it didn’t quite reach the size of audience it deserved but, for those who actually heard it, the feeling was unanimous – this was an unexpected gem that set expectations high for a follow up.

That follow up actually had roots in the ‘Gunpowder’ sessions. Some of the songs were demoed but didn’t quite fit; others were written, but not recorded. It isn’t always surprising that some of this material had to wait for another day, since some of it is every bit as good. While some of the album is sometimes hampered by a more home-recorded feel, it often shows the work of a man who’s been studying the Ryan Adams back catalogue…and that’s never a bad place to draw influence!

Those previously drawn in by Mason’s love of Americana might even be forgiven for not even recognising him on the album’s opener ‘Almost Fell For It’, since he chooses those three minutes to plug in, crank the amps and channel something that sounds a fair bit like Foo Fighters. The track begins with a selection of muted chords combined with a clean vocal that conjures the spirit of so much enjoyable post-grunge music. Upon reaching the chorus, the vocal stretches into something more melodic and the whole thing becomes more representative of overlooked 90s acts Age of Electric and Limblifter. Given time to adjust, Summit’s natural flair for a melody wins out even if the track initially seems half a world away from some of his previous works. A raw, demo like recording, ‘Voodoo Doll’ captures the performer alone with acoustic guitar. The unfinished state of the track mightn’t be the best send off, but it isn’t without charm: even in this bedroom setting, the strengths in his vocal are obvious – as is his gift for a simple melody against a candid lyric – but perhaps best of all, the straight recording allows the sounds of his fingers on the frets to add extra textures, as if this just wouldn’t have worked with more of a studio polish. It mightn’t be a classic, but it’s an interesting curio that shows the innermost workings of a great singer-songwriter.

A clear stand out, ‘Like Hell’ is a stripped down semi-acoustic tune that works various Americana and folk pop themes to its advantage. Complimenting a bleak lyric, Summit’s vocals are subjected to a gentle echo; his guitar, a slight reverb. Over a set of measured chords, a fat bass rounds out the sound before harmonic guitars cry over the last few bars. This number is so clearly inspired by M. Ward, as is ‘Catch & Release’, a number chock full of staccato guitar picking and a soft vocal that could have been sourced from decades before. As with ‘Like Hell’, the performer’s understated guitar work is impressive in the way he uses it as a base for a terrifically natural vocal, but the occasional presence of hard piano chords really makes the track, even lending it a grandiose brilliance via simplicity.

For lovers of acoustic guitar, ‘Biting My Nails’ offers plenty to enjoy, with a finger-picked folk melody that occasionally leans towards the traditional ‘Babe I’m Gonna Leave You’. With soaring electric overdubs and another confessional vocal that moves between the quiet and sombre to a rousing cry on the chorus, there’s very much a Ryan Adams feel to this track in places – particularly some of the slighter material from the unreleased ‘Suicide Handbook’. It’s a tune that doesn’t necessary grab straight away, but it’s another great example of a blossoming talent and – along with ‘Like Hell’ – reason enough to check out this LP. A little darker, ‘Alone With You’ sounds like a ‘Gunpowder Tracks’ leftover re-tooled with occasional Rivers Cuomo melodies, resulting in a solemn sound that allows Summit to experiment with droning mellotron sounds and multi-layered vocals. It’s hardly a ray of sunshine, but in terms of allowing a look into song construction, it might allow the more polished sounds of the previous album to be heard with a new perspective…and by the time a deep sounding guitar solo – drenched in echo – is ushered in for the climax, this little piece of darkness might just be another highlight.

Combining a slight country melody, a deep bass and more mellotron sounds, ‘Summer Cold’ (the song) is the natural successor to most of ‘Gunpowder Tracks’. It never tries to be flashy; instead it reaches into the heart of Americana and folk pop – again, very Ryan Adams inflected, but that’s never a bad thing – before ‘One Good Thing’ stokes up the piano and explores the 70s pop grandiosity of 10cc and Todd Rundgren, albeit on Mason’s own terms, and here he applies a timeless sense of melody to a vocal, adds a few George Harrison-esque slide guitars and a very mature chorus. The use of programmed rhythms and Casio keys highlights the demo origins in a less than ideal way, though; it’s a superb song that really needed – and deserved – a much better send off. As ‘Summer Cold’ began with something a bit rockier and so it ends: ‘Stick It Out’ finds Summit plying his trade to some classic power pop; shimmering guitars and an infectious hook come together on something that could have been inspired by Bleu or Mike Viola. With a bouncing melody, new wave keys and a solid rhythm, in pop-rock terms, it’s got all of the essentials…and it’s a superb way to finish.

‘Summer Cold’, on the whole, isn’t as polished as its predecessor and there’s sometimes a feeling that the recording choices don’t always do the songs justice. Mason Summit’s talent never comes into question, though; he’s a great writer and while this is not the most consistent record, when it hits the mark – as it very much does in more than a few places – it’s still very much worth an inquisitive ear.