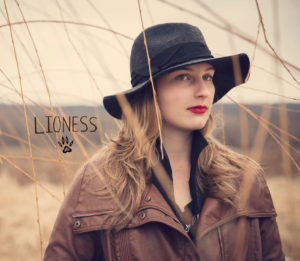 Jess LaCoy is a singer-songwriter and multi-instrumentalist.  Her debut EP finds her in control of most of the musical aspects – she not only possesses a good voice, but also plays all guitar parts and handles writing and production duties respectively.  In this sense, ‘Lioness’ seems to be a well-chosen name for her debut EP, since she’s someone who commands a strong presence.

The five tracks contained within this release are interesting, since this Lioness isn’t always all she seems to be on the surface. ‘High Class Bitch’ opens the EP with a lack of subtlety, both musically and lyrically, but for those looking for alternatives to Blues Pills, it’s a tune ready and willing to push so many of the right buttons. Setting off with a live sound that is dominated by a grubby guitar and wailing chorus, Lioness takes the bones of classic blues rock and stirs them up with a touch of Royal Blood-esque garage fuzz. Throughout the number, LaCoy ensures there’s space enough for her natural tones to wail…and she’s got plenty to wail about. Although very much in a tried and tested style, pretty much everything here works: the riffs are sizeable without crushing too many of the sassy vocal performances; the defiantly 70s grooves often come with similarly shameless old school solos and the general vibes conjure a half-stoned afternoon in 1973 through a prism of bands from the Tee Pee Records stable. A fine way to start…and with ‘Rattle My Bones’ injecting some Derek Trucks funkiness into a solid blues rock sound, things get even better. On this track, Jess settles into an old style soulful lead vocal that’s much bigger in appeal than her previous performance, without compromising on character. As the track progresses, the blues and soul hybrid proves more than solid with choppy riffs augmented by tasteful slide work. In blues rock terms, you’ve almost certainly heard it all before, but that doesn’t weaken the overall impact.

By track three, she’s ready to unleash a different side to her talents, as ‘Hush’ dispenses with all the retro rock chops and places her voice against relatively sparse electronica. Although never as quirky as Bjork or as other worldly as Bat For Lashes, there’s still plenty here of interest, as LaCoy’s youthful tone really suits the steady pace. With deep beats augmented by filtered dreampop-ish vocals, it’s a welcome twist bringing a tune that’s buoyant and almost otherworldly. By the time the beats fall away and LaCoy latches on to the repeated hook of “I don’t really love you, it’s just a distraction”, this also has the benefit of a haunting and personal style that the previous blues rock had denied. While it might not fit the tastes of those who were pulled in by the chugging classicism of ‘High Class Bitch’, a strong case can be made for this being the EP’s true stand-out track.

Returning to the rock roots – if not actual roots rock – ‘Chameleon Kid’ reinstates chopping riffs, but as if learning from the excellent ‘Hush’, LaCoy blends them with very early 80s analogue keyboard sounds. The way the forthright vocal meshes with a slightly disjointed melody is certainly more thoughtful than the blusterous approach of the opening pair. There’s a time for bluster, of course – as parts of John Mayer’s live album ‘Try!’ is testament – but this is certainly more knowing…and perhaps better for it, as it showcases some decent performances from the whole band, not least of all LaCoy, who has very much tempered her voice here to suit. Bringing a strong finish, ‘Attempted Love Song’ pushes the guitars to the rear once again, using them to work muted and slightly funky sounds, all the while knowing this is a pop/rock affair that’s all about the voice. There’s a vulnerability here that doesn’t come through on the previous numbers and the lead vocal is strong without being domineering. The way Lioness uses a 70s and 80s pop stance to appeal to a rock audience is reminiscent of Lissie and other post-modern Fleetwood Mac obsessives. With the variety present on this EP, it’s a tough call, but this might just be their most “true” sound. It’s a bit more radio friendly without becoming too bland; along with ‘Hush’, it’s reason enough alone to give this EP repeated spins.

While these recordings occasionally show the limits of LaCoy’s untrained vocal style, the songs themselves are fine demonstrations of a classic blues rock and pop/rock styles with a few twists thrown in for variety. The trippy style of ‘Hush’ more than suggests this Lioness has more tricks up her sleeve than we necessarily hear here, but nevertheless, this is a solid start.