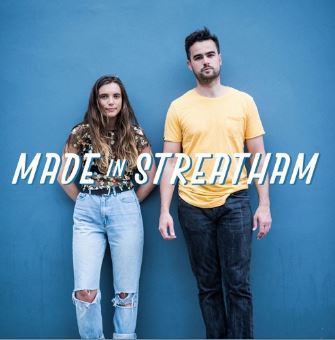 Blending various singer-songwriter elements with a UK themed Americana style and more than a touch of adult pop, Ferris and Sylvester’s debut EP ‘The Yellow Line’ was very much a bright spark in 2017. After that release, it seemed to be a case of onward and upward for the duo, with an increasing social media presence and some great reviews for their follow up single – the decidedly pop-oriented ‘Better In Yellow’, released at the end of the year.

2018 got off to an equally strong start with a live showcase at Battersea Arts Centre. With Ferris and Sylvester – or Issy and Archie to their friends – seemingly on a roll, could their “difficult second release” raise their profile even higher? With a mix of rootsy cool but also some radio friendly hooks thrown into the bargain, it seems very likely.

The single ‘Better In Yellow’ kickstarts ‘Made In Streatham’ with something that is incredibly upbeat and unashamedly made to be heard on the radio. Archie’s guitar leads off with a lightly reverbed chug, gently suggesting motion, but it’s when the vocals appear that this duo’s appeal really shines through. Archie’s voice mumbles, as if he’s channelling M.Ward, but Issy steals the show with a semi-husky pop-ish harmony that instantly feels good. Musically, things remain strong: the bass pumps a solid rhythm that manages to be sympathetic to both the uplifting vocal melody and a semi-twangy guitar solo. After a few spins, this sunny piece of adult pop really sticks: in many ways, it sounds like a natural successor to the best parts of KT Tunstall’s brilliant ‘Drastic Fantastic’ LP from all the way back in 2007.

Moving away from pop and into rootsy Americana, ‘Sometimes’ begins sparsely, thus making a superb feature of Issy’s voice and Arch’s acoustic guitar. A verse is all that’s need to be reeled in and then the full band step forward. The bass is deep; a tinkling piano sounds cool and retro, while Ferris and Sylvester take turns at the mic, eventually coming together for a repetitive but inviting hook. Perhaps best of all, though, is the way Archie’s dobro playing is used in the number’s second half to link two choruses and to also build atmosphere. High in the mix, you can really hear the strings as his chosen melodies bridge the decades between back-porch players and hi-tech studio set-ups. For lovers of all things acoustic, ‘Loser’ combines faultless harmony vocals – featuring Issy covering a whole range from sultry and mumbly, to a full on cry – with some intricate guitar work. Throughout the first half of this laid-back track, Archie works some great finger-picking, before strings and bass fill out the second part, making F&S sound like Lewis & Leigh…meeting with Mazzy Star. It’s pretty mellow, but it’s just lovely.

The EP’s clear stand-out (a great feat in itself given the quality of the rest of the material), ‘The Room’ finds the duo in their most natural state: harmonising with near perfect precision, accompanied by timeless sounding music that calls back to 70s singer-songwriters. With very American sounds and a touch of country for the send-off, a lolloping tune is distinctive, but always unfussy enough to allow the vocals to take centre stage. The way the harmonies apply themselves to a tune that could be decades old shows influence from a deep and classic record collection. With both performers in fine voice, this could have just as easily been a highlight from the first EP, giving extant fans the all-important flipside of ‘Better In Yellow’ – and taking in some lovely “woo-woo”s along the way, this is certain to become a fan favourite. Last up, F&S reach for something totally retro, as ‘London’s Blues’ fuses Americana elements with more than a pinch of 50s rock ‘n’ roll coolness. A steady beat informs the pace, while an upright bass slaps throughout, recreating something that sounds like a more modern take on an early Elvis recording. With the addition of muted trumpet, this is incredibly sassy, but as always, no matter how good the session band, Issy and Archie steal the show. Archie lays down a mean retro guitar, channelling various heroes with traces of Chris Isaak, Scotty Moore and even Dave Edmunds (though to be fair, Edmunds and Isaak have spent a lot of time paying tribute to Moore and his contemporaries) and the vocal harmonies are terrific, even when approaching this kind of jaunty material. The way a live sound has been captured within the studio environs really lifts this recording and while it might not always have a complete bond with F&S’s more honeyed take on Americana, it’s a terrific – and fun – end to this release.

For a second time, the EP format really comes through for these guys. Without the luxury of a full forty to fitty minutes to play with, they again present a work that’s filler free. In just under “half an album”, they’re able to showcase their song writing as well as reasonably varied arrangement skills and with great results. ‘Made In Streatham’ is classy and thoughtful music for an adult contemporary market: it’s shiny, accessible, commercial, even…but never bland. Highly recommended.

Read a review of Ferris and Sylvester’s EP ‘The Yellow Line’ here.