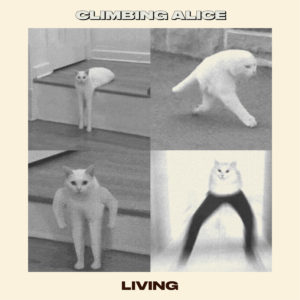 At the beginning of 2016, Wakefield’s Climbing Alice sounded like a force to be reckoned with on their ‘Melt Yourself Up‘ EP. Mixing alt-rock, goth and shoegaze noises, the four piece band created a great listen via a wealth of influences. There wasn’t so much in the way of immediate hooks or catchy melodies, but if it were a riff or six you craved, the EP – and band – came up winning pretty much every time.

Almost two years on, their ‘Living’ EP presents more of the same – at least on the surface – but if anything, it’s perhaps even moodier, eventually bowing out with a superbly massive stoner rock groove. ‘Ninja Powers’ kicks off with an overdriven guitar jangle, which is just enough for listeners to perhaps think they’ve chopped in their prior noise rock traits to be more influenced by the likes of Wire, but it’s a false step. After a bar or so, the guitar falls away to reveal a slow rhythm, powered by a heavy bassline. The dark blues is very much order of the day here, and as the vocal croons and howls accordingly, it’s sometimes hard not to draw a kneejerk comparison to the earlier works by Nick Cave & The Bad Seeds. The music lurches and crawls as if creating an encompassing darkness is more important than melody, but the way the heavy bass interacts with a huge vocal gets everything off to an impressive start. With the guitar eventually coming back to cover everything in a heavy jangle – without ever killing the awesomely intense bass – this track really sets the mood with a hefty pair of size nines.

Not quite as striking, ‘No Time For The Living’ moves into a post-rock sound, with intermittent metallic guitars throwing out clanging grooves. The music – hovering somewhere between Leeds based noise rockers Hawk Eyes and Slint – allows the bass plenty of room to move while Climbing Alice settle into a classic LOUDquietLOUD format. The riffs are simple and have presence, but even so, never manage to be as devastating as the howl of rage passing as lead vocal. Taking time midway to tease with something funkier, this is more than just an alt-rock sledgehammer; displaying multi-layered talents, there’s a greater depth here than first appears. The whole band fights for dominance and if you came looking for something that sounds great when cranked, you came to the right place. Mixes garage rock and goth to present something rather invigorating, ‘Pizza King’ is a throwback to the previous release in many ways. The way the guitars and bass clash, it feels as if the band are on the verge of burnout (especially since these three minutes barely deviate from their initial groove) but with the Cave-esque vocal stepping aside for something that occasionally sounds like a louder version of Ian MacCulloch, this is almost certainly the EP’s most accessible track. As always, there’s a big difference between “accessible” and “radio friendly”, so listeners really shouldn’t have any fears about Climbing Alice lightening up too much.

Lastly, a tune named after a member of Take That throws up various grinding guitars and a heavy rhythm that moves things towards a very stoner rock groove at times. Mixing those classic stoner sounds with something a touch more garage rock, this track shows off most of Climbing Alice’s best traits in a handy five minute nugget. The main riff, although carrying echoes of Royal Blood, manages to be more exciting than that bunch of over-hyped press darlings could ever be, even if you gave them years to experiment. The all round heaviness is absolutely spot on: melodic enough to allow an accessible listen, yet heavy enough to please fans of Fu Manchu and their bretheren. Over a great riff, the vocal – subjected to various echoes and treatments – howls in a way that makes the lyric fairly inaudible, but by the time the band tap into a slow and heavy riff for a coda, it’s clearer than ever that it’s always the music that’s important here.

This is, at times, potentially heavier than the previous EP, but you shouldn’t let that deter you. In fact, the general brilliance of ‘Jason Orange’ (the song, not the man – although we’ve nothing against him) might be the best thing Climbing Alice have recorded. Is ‘Living’ better than the previous EP, overall? That’s a tough call since, in places, they’re (Fiona) apples and (Jason) oranges. On its own merits, of course, it’s well worth a quarter of an hour of your precious listening time and presents a good enough reason why this band should be considered very bright lights on the UK underground scene.