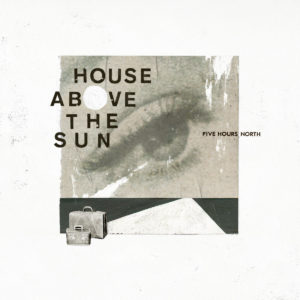 ‘Runaway Devil’ begins with a slightly scratchy riff. As the rest of the band fall into place, it makes complete sense: the bass and drums pump hard, setting the pace for a blues-based riff and the ensuing groove is pleasing. Approaching the main hook, the vocal latches onto the title and the fuzzy guitars that step forth help push everything into a slightly funky vein, as if the band have been listening to some of John Mayall’s lesser-known albums from the late 90s and The Kinks lean period from the mid 70s. The presence of a busier vocal – with some understated harmonies and a timeless 70s rock guitar solo give this opener a little of each of the right ingredients for a fantastic recipe. ‘Counterfeit’ lifts the tempo with a number that works itself around a dancing bassline, over which 90s jangle-pop and Americana themes come together in a very Wilco-ish way. The music is perfectly suited to Jim’s lead vocal, always working this track with a slightly reedy yet thoughtful performance that although very much makes its presence felt, hangs back just enough – he so obviously knows there’s a strong musical backline here. The main hook is decent enough, though possibly wouldn’t work as well as it does had the rest of the elements not been as strong. With some great drumming to finish, a few plays singles this out as an early album highlight. Far softer, ‘Eagles Dare’ is great Americana themed pop/rock. Jim’s natural tones seem far more at home. The music is simple but so lovely: a soft and repetitive guitar riff echoes elements of Jackson Browne and Bob Seger, but adds a homegrown tint. That should be enough for some of you to love the song almost unconditionally, but there’s such an ease here – and that, too, just oozes charm. The band so obviously feeling an affinity for the sound and by the time they pull everything to a close with a few shameless “do do doo”s, this might just have scored a place among the year’s best songs.

After that, there might’ve been a danger for things to feel a little disappointing by comparison. The band seems to have thought of that, though and takes the opportunity to rock things up. As a result, ‘Tonopah’ cranks the guitars for a Rob Rule and Soul Asylum influenced workout that mixes huge ringing guitar sounds with steady beats. Over this very familiar – and very 90s backdrop, Jim recalls a tale of teenage desires and of a backward looking naivety, a tale that really explodes when hitting the chorus. Ariel is far higher in the mix and her harmonies are solid enough to make an impression without overshadowing the melodious guitar lines. Dropping into something quieter midway, there’s time for a thoughtful guitar lead underpinned by tinkling Americana sounds. “There’s nothing you could say on a postcard” opines Jim, suggesting this place in his mind is desolate as hell; “They can keep the money…I’ll keep my heart”, he sings with conviction, suggesting that while ‘Tonopah’ isn’t exactly a thriving metropolis, he’s happy enough whiling away his memories. While this album comes with many highlights, the nearing six minute sprawl is up there with ‘Eagle’s Dare’ as one of House Above The Sun’s finest offerings up until this point.

The intro of ‘St. Augustine’s Blues’ has ghostly echoes of Crazy Horse and mid-70s Clapton, but soon finds its own identity. Another blues-edged workout with a stomping backline, this track is a great workout for Jim’s guitar work, as he drops a brilliantly repetitive riff over the top of Ariel’s more sedate acoustic work. The band really comes together throughout this track, very much showcasing their taut but not flashy approach. There’s a melodic toughness here, but in many ways it feels like a warm up for ‘No Virtue’, where the rock side of the band really explodes. Allowing bassist Sam Thiery a chance to step forward, this sassy blues funker takes a couple of stylistic cues from the Stretch classic ‘Why Did You Do It’ – a style that HATS are able to push forth into far rockier climes. Thiery never steps back from that initial tough stance; his forthright presence means that drummer Rory O’Connor plays a little harder too, while Jim throws out some fiery blues riffs. With a strutting sound almost immediately in place, there are ample opportunities for lead work, before moving into the track’s second half where the rock subsides and a choppier feel takes a hold. Equally cool, the vocal shifts more towards the front and the brilliant live in the studio sound is more obvious than ever…and by the time things return to the Stretch-esque funkiness, things sound harder and tighter all round. In terms of funky blues rock, this is top drawer stuff.

Taking a gently noodling guitar riff and a soft jazzy echo on the drums, ‘Childhood Home’ taps into fine Americana with Jim and Aerial almost taking equal parts vocally. For the first time here, a one line chorus exposes a potentially weak link, but the music is finely crafted, borrowing from classic country rock cues, resulting in something that, again, might strike a chord with Jeff Tweedy/Wilco afficionados. It’s one of those tunes that’s just sort of nice, without going anywhere – and if that sounds like a back-handed compliment, then so be it – if this is the poorest track HATS have at their disposal, it says something about how good the rest of this record is. A stripped back intro to ‘Footsteps’ accentuates the Americana influences once more, while the male/female vocals come across like a unsure relation to Ferris & Sylvester. There’s charm here, but it’s when pushing the rest of the band forth, the track really finds its feet. Adding a warm bass and easy drums, there’s an unashamed love of country rock sounds bleeding through everything and while the performance mightn’t be especially original, the music is rather pleasing.

Another very welcome rockier number, ‘Ask Me To Pretend’ mixes the westcoast pop of Jackson Brown with the country rock strains of Richmond Fontaine on a number that makes Jim sound completely immersed in his chosen retro sound. This already suggests it’ll be an enjoyable number before a superbly uplifting hook pulls the quality up a few notches, sometimes sounding like a tighter and more accessible version of The Great Affairs, while the wistful and questioning ‘Find A Warmer Place’ recalls a couple of Pete Droge classics, on a number that offers a fantastic blend of acoustic rhythms, solemn piano and the best harmony vocals on the whole album. It seems only right somehow to finish with something melancholic…and in doing so, House Above The Sun bow out with something that represents their softer side beautifully.

‘Five Hours North’ comes highly recommended to any listeners looking for solid tunes with a bluesy and UK Americana bent.Throughout this album, everything is polished just enough to sound professional, but so often retains a very live feel and that results a sound that’s really complimentary to the material in hand. Among these ten numbers, there are none that could directly or obviously be labelled as filler; the retro qualities of the band are on display throughout, alongside a very 70s feel to the songwriting. The 2015 EP was good…but given extra room to stretch out, this album is great.