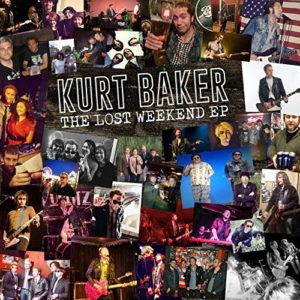 Whether solo, playing as a member of the Kurt Baker Combo or a key member of Spanish pop-punkers Bullet Proof Lovers, something that comes across on pretty much any Kurt Baker recording is how much joy he gets just from playing music for the love of it. He’s also frighteningly prolific. If he’s not sweating it out at live shows, he’s in the studio. If he’s not in the studio, he’s writing. Obviously, with such a frantic recording artist, not everything makes the final cut of an album, but Baker is never content with leaving things on the shelf.

‘The Lost Weekend EP’ is his second release rounding up various stray tracks and much like ‘Brand New B-Sides‘ before it, the release gives a great insight into the more frivolous side of recording, offering a couple of covers, bits from long out of print 7”s and – for the die-hard fan – three previously unreleased cuts.

Looking at those unreleased numbers first, these are good enough for any existing fans to pick up a download. The most interesting of the unreleased tunes – though perhaps not necessarily the best – ‘Keep Away’ mixes Baker’s trademark guitar-driven sound and curly vocal with a bubblegum-ish melody, showcasing his love of things from oldies radio. A co-write with Dan Schafer (of Dan Vapid & The Cheats fame), this has been hidden away for five years prior to release here. It takes a little while to tune in to the slow delivery on the chorus, especially given the overall bombast of Baker’s vocal, but there’s a big hook to be heard – and it’s a hook made bigger by some unapologetically chuggy guitars. Overall, though, the combination of tough and sweet lends a great sound throughout, even though you’ve heard Baker perform in this style with better results than he manages here. This is still enjoyable, though, and it’s good to hear something else from the session that spawned the ‘Want You Around’ 7”. [If you haven’t already, seek out that single to hear a storming cover of Billy Joel’s ‘Sleeping With The Television On‘].

Kurt can often be relied upon for a cool cover and in that respect, ‘Lost Weekend’ doesn’t disappoint, as he brings two of his favourites to the table. Cranking out the shameless rock ‘n’ roll, Larry Williams’s ‘Bad Boy’ gets shaken up with a devastating increase in volume as Kurt and the Combo tear through a ferocious two minutes. A boisterous vocal performance – carrying KB’s trademark style, injected with a ’50s wobble where appropriate – certainly makes an impression, but it’s Jorge Colidan’s tough lead guitar breaks that carry this tune to the next level. In many ways, this would have suited ‘In Orbit’ a little better than the chosen Devo number, so it’s great fans can now add this to their collection. On the basis of this recording, although it’s been done to death by others, it would be cool to hear KB&co smash their way through Larry’s perennial ‘Slow Down’; there’s little doubting they’d do a fabulous job. Recorded in 2014, Kurt also takes on the old Nick Lowe/Elvis Costello chestnut ‘What’s So Funny ‘Bout Peace Love & Understanding’. True to form, he doesn’t try and do anything too clever with it or twist this classic into a new unrecognisable form, but instead chooses to shift it from bouncing pub rock into a realm of glorious power pop with a punk-ish edge. The guitars dominate throughout – a twin assault that recalls the more melodic elements of Bullet Proof Lovers releases – and a cheeky counter melody dropping in and out throughout eventually brings things to a rather exciting conclusion. Above all else – like most of Baker’s previous covers – what comes through more than anything is how much he loves this song…and if you like chunky power pop, you’ll almost certainly love his take on it.

Dating back to Baker’s days in the States, ‘Girl’s Got Money’ was previously released on a very limited 7” in 2013. A natural companion to most of ‘Brand New Beat’, this number oozes early 80s power pop charm. A classy tribute to The Rubinoos and Cheap Trick, this number comes loaded with sugary hooks and a narrative regarding a woman who “drives expensive cars, eats expensive caviar” and whose “credit is as plastic as can be”. Kurt’s big bugbear?: “She won’t spend a dime on me!” Very much a homage to the era of songs about cars and girls, this is a relationship doomed from the very beginning. Factor in a dominant synth solo from Rum Bar’s top session player Kris Rodgers and a thoughtful lead guitar break courtesy of Kip Brown and this has all the ingredients of a should-have-been hit single.

Two more numbers recorded with the Combo prior to the release of ‘In Orbit’ also help to show how Baker’s Spanish band are as good as the old US-based KB Band – and in terms of sheer energy, they may even be better. ‘Give It Up’ has a hook that’s so catchy that the band hits you with it straight out, without even the grace of an intro. What follows is a very pleasing mix of 80s power pop and a dash of rock ‘n’ roll. Traces of Pezband lurk beneath the surface, but Baker’s loud vocal style and obvious curl ensure you won’t mistake this for anyone else, while the driving rhythms throughout gives Sam Malakian a great workout. Moving into garage rock territory, ‘Motion Devotion’ has a buzzing guitar line that harks back to the late 60s psych boom, while the rest of the band settle into a superb brand of rock. The dual guitar approach is great and the punchy 60s style on the chorus has a near timeless appeal. Taking a sidestep into bubblegum rock, ‘Thank Goodness It’s Friday’ (originally from the Japanese issue of ‘In Orbit’) applies garage pop guitar lines and a Munsters inspired organ line to a trashy hook, resulting in something that sounds like a Kurt Baker tribute to Josie & The Pussycats. File under: fun, pure fun. He’s written better songs of course, but its hard to ignore the universal appeal of the lyric here. Everybody loves the weekend…and Kurt Baker seems more excited than most!

Leftovers – b-sides – strays – orphans – cast offs: call these non-album cuts what you will, but they’re pretty much as good as most of the material that took pride of place on the last couple of Kurt’s full-length releases. In the case of the Larry Williams cover and ‘Girl’s Got Money’, ‘The Lost Weekend EP’ even features a couple of tracks that would be more than suitable for first time listeners. This EP sets the benchmark for a collection filler, since it’s almost anything but filler itself.