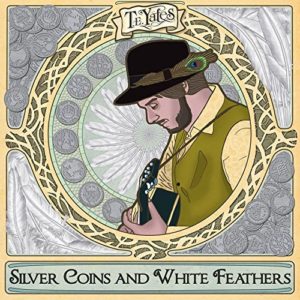 You might never heard of T. E. Yates prior to the summer of 2017, but before the release of his debut full-length ‘Silver Coins & White Feathers’, the Manchester-based singer-songwriter spent years plying his trade on the underground scene, both as musician and poster artist. This record alone has roots stretching back several years and he pulls a huge selection of moods from his bag of old fashioned trickery to give these tunes an appropriate studio send off, ranging from thoughtful and maudlin, to the flippant. Occasionally, his work even has a sneering quality, as best heard on the album’s opening pairing.

The sonic improvement of album opener ‘Media Machine’ alone is huge. In the five years since its earlier release, it’s gone from being a demo-like tale to a full blown piece of folk pop. Never shy of bells and whistles, T. E. places some amazing finger-picked acoustic guitar against a choir of voices, a muted trumpet and an old style organ. Such grandiosity is deserving of the lyric, too, with the artist tearing an emotive anger into modern day journalism and how we should never be sucked in by the printed press. “This could be the worst day for journalism”, he booms, partly with a bombastic croon that harks back to cult artists of the 70s, but also with a more modern inflection that occasionally hints at Gene’s Martin Rossiter. The voice – that voice – might be make or break here, since Yates isn’t shy of pushing for the extreme to make his point heard. The contrast between voice and music certainly makes this as much a frustrating record as an entertaining one.

Mixing an almost dancey drum beat with more multi-tracked picking and retro cool, ‘The Cold Parade’ is equally as unforgiving, as this brilliant tune is counterbalanced by a deep and haunting lyric where the protagonist likens his life to that of a no-mans-land far from the trenches, but also ties this in with a modern day pacifism. “I won’t join your army, ’cause I don’t believe in this war” he wails with the conviction of Morrissey (albeit without the burning right-wing undercurrents) then underscored by the business of a William Orbit arrangement for Beth Orton. It shouldn’t work as well as it does, but it’s to Yates’s credit that it does. A little softer, the gorgeous ‘Burning Bungalow’ fuses the intricacies of Nick Drake and Pentangle with an electric piano accompaniment that represents the best of 70s roots rock. Slowly moving from an unsure wail into a booming cry (with a choir of backing vocals), Yates is in his element with another pacifist message on one of the album’s most satisfying and complete performances. He’s a man in total control of the song’s destiny even if his natural approach to singing errs towards the loud and he bizarrely doesn’t seem so concerned by his own melodic input. His band, meanwhile, are superbly tight on a groove that’s on loan from Rusted Root: mixing calypso rhythms, 70s rock and a huge wave of folk, this tune is a genuine highlight. Quite how ‘Fairy Tale’ – a trashy rock ‘n’ roll number with a pessimistic view point – ended up sequenced on the album straight after is baffling. From the heartfelt to the wantonly trashy in little more than a heartbeat, this could even be the work of a different performer.

Just as different again, ‘Orion’s Belt’ starts out with a brushed drum and muted trumpet, suggesting a homage to Hoagy Carmichael and the jazz of the thirties, but once the main melody finds its feet, it’s clearly a loving tribute to Neil Young’s ‘Harvest Moon’, complete with Yates’s own voice more often than not sounding like ol’ Bernard Shakey himself. The number may be stripped back and short, but with trumpet and vibraphone on hand, there’s still a great attention to detail. More country music informs ‘Sometimes It’s Hard To Be A Man’, a waltzing throwback with fiddles and pianos to suit. Yates – again, channelling his inner Neil Young – cares not for going back to fix any bum notes, but in this instance, the naturalism of his performance provides more than half the charm, especially in the way his wavering tones interact with the piano and strings.

Another highlight, ‘Rorshasch’ mixes rock drums and droning echoes with a circular guitar motif influenced by John Renbourn. The end results are much bigger than the sum of those influences, with synths and strings creating a slightly disturbing backdrop – a darkness that only seems to escalate as Yates booms “you want me to believe!” repeatedly, sounding more agitated with each passing of such a dark hook. The way this tune arrives, never changes from it’s heady and heavy rhythm and yet sustains superb entertainment for over five minutes is very impressive. For those looking for straighter folk/Americana, ‘April’ shows off a lovely finger picked melody set against light tinkling piano and steel guitars. Like a familiar friend, this could be an out-take from Ryan Adams & The Cardinals’ ‘Cold Roses’ opus, yet at the same time, fits this album perfectly with the easier tones and simpler arrangement being a perfect counterpart to tracks like ‘Media Machine’.

Looking at this album as a whole, the tunes that lean farthest towards the world of Neil Young are lovely, the detail within the lyrics is often stellar and the music is superbly arranged throughout. It’s impressive how Yates can take some key influences and manipulate them at his own will. However, for all the good here, much like Edwyn Collins before him, Yates’s forceful croon can be hard to attune. As previously mentioned, the two elements of voice and music so often seem to be at odds, even fighting for dominance. This is frustrating, maybe, but never without great interest – ‘Silver Coins & White Feathers’ can still be recommended for the more patient listener.