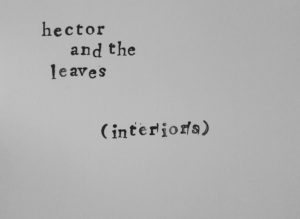 At the very beginning of 2016, Hector and The Leaves released ‘Little Bee’, a self-financed EP of material drawing influence from The Beach Boys and The Beatles, redressed in singer-songwriter threads, mixing 60s pop with strains of folk from across many decades. While the EP didn’t necessarily gain country-wide recognition, it showed Tom Hector to be a songwriter more than able to take different influences and recycle them with style, while still allowing his own personality to inform the result. Eighteen months on – and after posting a selection of musical sketches and unfinished ideas online – ‘(interiors’), the first proper follow-up, takes more of a lo-fi singer-songwriter path, but the many things that made ‘Little Bee’ worthy of an ear are still very much in evidence.

‘(interiors)’ is aptly named, as it’s six numbers represent a very introspective, deep style; more often than not, questioning and soul searching, yet never seeming impenetrably insular. Despite being largely acoustic, ‘Watching The World’ wastes no time in flaunting a set of woozy, Beatle-esque chords. The effect of hearing this for the first time is to feel as if you’re only experiencing half of the performance, as if you’re hearing the bones of a great Bluetones song drifting through from a far away room. Given time to adjust, the strains of retro pop through an Elliot Smith filter are potentially classic Hector, even if not as fully formed as the bulk of the ‘Little Bee’ EP. It’s a fine way to start, but it’s with the second number, ‘Call You Up’, where everything really clicks. Tom, wielding a strident acoustic guitar, fronts a superb retro arrangement; a steady drum part bolsters his well-chosen, equally solid chord progression, but it’s the everyday narrative involving a relationship, a phone call and some Chinese takeaway that makes the track really appealing. The way the fairly mundane tale takes on a new life thanks to a great arrangement is pure Norman Blake – and while the homespun budget is obvious, there’s potentially something here for Teenage Fanclub and die-hard Big Star fans to enjoy.

Moving into the second half of this EP, things move from familiar and quaint to extremely fragile. ‘Two Friends’ presents a quick burst of acoustic guitar work designed to ease into ‘Holding On’, a quiet and aching workout for voice and solo guitar. The DIY recording really brings out the vulnerability of the music; the intricacies in the finger picking are only completely clear when heard on the headphones (the suggested way to hear this understated release). Placing Hector somewhere between Nick Drake and the quietest parts of Nic Jones, this is perhaps the most essential of the solo recordings featured within this short collection. Finally, ‘Julianne Moore’ places hard strummed chords against a wistful voice and occasional piano. The addition of a simple piano on an already simple tune will certainly remind some listeners of Nick Drake – specifically parts of ‘Pink Moon’ – but, at other times, the attention to multi-tracked voices and easy harmonies is very much a throwback to Hector’s own ‘Little Bee’, as if to bring things full circle. Bringing the tune to a close with a unfussy fingerpicked lead, there’s not been too much of a fixation with the red-haired actress, but it’s very much the kind of tune that would put everyone at ease if chosen as a perfect late night listen.

‘(interiors)’ is short and stripped down, but it shows things don’t need the full Brian Wilson or Jellyfish styled bells and whistles to make an impact (or in the case of the opening track, to even make great pop). For those who heard ‘Little Bee‘, this will be a welcome return. For those who haven’t, take this for a spin with an open ear anyway: Hector and the Leaves’ homespun charms and loyalties to old-fashioned songcraft might just be what you need – a welcome friend in an increasingly troubled world.