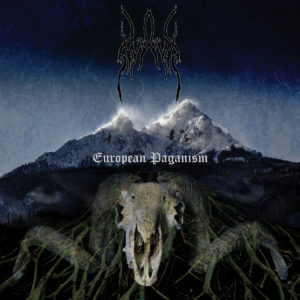 Two years on from ‘Songs of Regression’, UK pagan metallers Nordland really upped the stakes for their forth album ‘European Paganism’. Not only does the album boast a better production value than before, but the band have taken their love of extended tracks to their very logical extreme. Whereas their previous few records offered at least two ten minute workouts, ‘European Paganism’ outdoes them all by presenting just three tracks within a near forty five minute span, with the opening number taking up the best part of half an hour.

With some twenty seven minutes at their disposal, the appropriately titled ‘The Mountain’ offers massive – almost endless – scope for Nordland, and it’s time they fill with all manner of riffs, drones and noise. At first, cold electric guitar throws out thin shapes, clanging more in the manner of a post rock band, presenting a simple musical motif that will recur throughout the piece. The introduction of a huge power chord driven riff signifies something closer to the Nordland norm, while the vocal joins with a throat scratcher of a noise that only serves to make everything more stand-offish. By the time that main riff takes a definite stance, the guitars lend a necessary sense of metallic melody as the band push forth. If they were to fill the track with this slow and moody style, the lengthy piece would certainly have plenty of atmosphere, but Nordland have other ideas. Shifting into a purer black metal vein for a while, the drums explode into fury while the twin guitars work some great riffs, but there’s better to come. At the six minute mark, the pagan and black metal roots are disturbed by sharper and deeper riffs of the progressive metal school – riffs which fight the black for dominance and ultimately lose – before everything falls away to reveal the atmospheric opening riff once more. Moving into what feels like the second movement of this black metal opus, slow and hard black metal riffs blend with a post-rock artiness; the stomping quality of both is admirable, especially when backing a pneumatic guitar solo around the nine minute mark. A lengthy instrumental break allows the guitarists to show off their skills with something more melodic, before the third movement ushers in quiet and cold riffs before plenty of slower and heavy sounds dominate. Lyrically, there’s something between an old folk tale and an incantation unfolding, but the words themselves are all but indistinguishable from a world of snarls, so it’s much better to concentrate on what’s going on around the voice. Between the slow riffs, there’s a brief sidestep into something that sounds more like a throwback from the New Wave of British Heavy Metal of yore, before the seventeen minute barrier returns to the prog/black hybrid with great results. Filling the last ten minutes with a solid mix of black and thrash metal styles, with the odd nods to angular post rock sounds, a cheeky doom riff, as well as a couple of surprisingly melodic touches, these guys certainly have a clear vision of their art…and this is something that becomes far more obvious when the song ends, and you actually realise the full twenty seven minutes has neither sagged or dragged, or else felt padded out in any way.

The rest of the release is literally dwarfed by such an epic opener. What little remains of the album is represented by just two more tracks, both of easily digestible lengths. ‘A Burning of Idols’ makes a more obvious play for the pagan side of the band’s art, by beginning with the sounds of fire and various chanting voices, their deeper sounds rooted in the past, as if culled from an old Hammer movie. Once things get going, there’s a full compliment of shredding black metal guitars, which would be quite harsh had this record not had a resonably good production budget. With these bolstered by some furious drumming, you’ll kind of know what to expect if you’re familiar with any black metal – pagan or otherwise. Of greatest interest within this full to bursting number are the instrumental breaks which fuse the black with thrash – a couple of absolutely killer riffs dare to break through the wall of sound at times – as well as a smidgeon of groove metal solidarity. As is so often the case, the vocals can be obtrusive, but there’s so much to enjoy from a musical perspective within these near nine minutes, it is one of ‘European Pagan’s more obvious highlights. As a cold and shredding solo leads everything to a big finish where black and thrash metal occasionally become dangerously close to a folk/battle metal stomp, Nordland take no prisoners.

Having bombarded their listeners with as many black metal styles as possible, the closing statement – for these feel more like musical statements than songs – ‘Rites at Dawn’ firstly concerns itself with a solid but very slow riff, where a funereal drum dictates a slow pace intercut with classic sounding black metal passages. It’s quite run of the mill if directly compared to what’s gone before, working far better if approached as a standalone listen. The six minutes constantly show the band to be good players, even if the much straighter style doesn’t open itself up so much to those with no interest in black metal.

This album is vocally quite tough, but musically seems to be both rather brave and very progressive (that’s progressive in boundary pushing and not “prog” as in Dream Theater wankery). It’s fair to say that ‘European Paganism’ is unlikely to gain an audience far beyond those who like the more epic and indulgent end of extreme/black metal, but what it does, it does excellently. For Nordland, it’s the culmination of their previous experiments, resulting in an album that leaves most of their previous works in the shade.