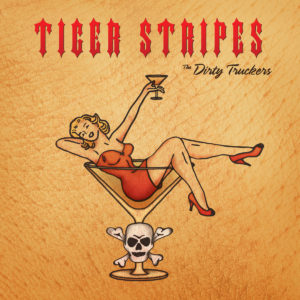 On their fourth release, ‘Tiger Stripes’, The Truckers serve up six tracks of dusty rock ‘n’ roll, drawing natural influence from some of their other bands as well as a hefty dose of Rolling Stones, ‘And The Horse’ era Soul Asylum and the legendary Tommy Stinson. While that’s certainly going to result in six tunes that sound like other things you’ve heard from these guys before – both together and apart – there’s no denying they sound better doing than so many others. Five years on from its original release on Diorama Records, this EP was reissued digitally by Rum Bar Records (home of Watts and The Snakes), allowing for more than just a timely re-appraisal; in some cases, the welcome reissue gave retro rock fans an opportunity to hear this great material for the first time.

Among the six tracks, there are no weak links and – if anything – the tunes sound better than ever. ‘Stranger In Disguise’ kicks the release off in unquestionable style, with Tom Baker and John Brookhouse cranking out a twin guitar assault that’s all grit and huge underpants, before Baker steps to the mic with a tough drawling retro rock vocal. It’s verses are a carefree, careening affair that could even derail themselves in an instant while a hooky chorus seems designed for shouting with glee. The squalling six string leads add extra edginess, while the rhythm section motor through…and if this sounds as if The Truckers have written themselves the ultimate homage to ‘Pleased To Meet Me’ era Replacements, then that’s never a bad thing. Here, they take those sounds and wring them through, run them ragged, certain that fans of such spit ‘n’ sawdust rock will every second. With a bit more finesse, though always keeping an eye and ear on that old Minneapolis sound, ‘Human Contact’ stokes up the Americana edge without sacrificing too much of the crunch. The resultant tune captures Baker in decent voice, while the music really harks back to the beginnings of Soul Asylum’s major label years. A number that really shines from the get go, it’s a pleasure to hear the way Baker jams with the guys from Watts et al, as if taking the reins as frontman but without being an overly controlling band leader. A special shout out here for The Neighborhoods’ David Minehan whose production accentuates the guitars in a way that really brings out the best in the players and the melodic nature of the track.

With an equal mix of rock, twang and bounce, ‘Feedback’ could easily be a leftover from Paul Westerberg‘s ’14 Songs’ sessions, and while fairly predictable in arrangement, Baker and company excel in the performance department. The guitars compliment each other, despite playing two different things throughout (an approach that seems to have worked for Ron Wood and the Keef), while Jamie Griffith’s bass appears higher in the mix than ever before. Moving swiftly into ‘Not That Into You’, it’s grubby Americana time once more, on a tune that has consistently pleasing lead guitar sounds, dropping musical motifs against a steady groove, led by John Lynch on the drums. There’s a lot riding on this Soul Asylum-esque stock, but the presence of a great hook not only makes this one of the EP’s best cuts but also shows how The Truckers can deliver these sounds every bit as well as any before them. A multi-layered guitar arrangement throughout ‘Arms Length’ tips the hat to The Snakes, while a semi-snotty vocal ensures this wanders more in the trashy rock field than some of the release’s other tracks. It might be short, but between another strong hook and an old style stereo split making a feature of two howling guitars, it packs a reasonable punch in the memorable stakes.

Perhaps this EP’s best number is also its most polished: to close, ‘Just Run Away’ slows the tempo and injects more than a bit of Americana into the tried and tested rock. The slight country twang on the guitars (though still not gee-tars by any stretch) recalls great works by Kevin Salem and also well-loved tunage by John Mellencamp circa 1987. Above all, though it’s twang, rock and class draws a very close parallel with the softer material from Tommy Stinson’s Bash & Pop. It’s a tune with a superb retro melody both vocally and musically, with Baker is at the top of his game, more tuneful than at any time with the Snakes. The combination of that, plus Brookhouse’s honeyed guitar lines – drawing a little musical soul from Ron Wood – makes this number sound particularly timeless. It’s the perfect way to finish a great set.

If Stonesy rock is your bag – and let’s face it, when done well, it never gets old – this is one to snap up straight away, especially since it got so overlooked upon original release. Although the full six song affair is only a digital EP, it puts previous Truckers records in the shade and also sets the tone and pace for Baker/Snakes records to come. ‘Tiger Stripes’ is one to be played loudly and often, but make sure you cue this up with Baker’s 2017 record ‘Lookout Tower‘ for best results.