It’s been a busy week for Dearly Beloved. They’ve made the long haul trip from Toronto to the UK to play a handful of shows with Tommy Stinson‘s Bash & Pop. Earlier in 2017 they released their fourth full length ‘Admission’ – an excellent record, made with Ramones/White Zombie/Misfits producer Daniel Rey – and while they don’t have the biggest audience in Britain, apparently, at last night’s London gig “they absolutely killed it”. Given such enthusiasm for their live current show, any opportunity to catch them live should be taken and this final night of the UK visit provides an excellent opportunity to see them working in a more intimate environment. Much more intimate.

The Ramsgate Music Hall may be small, but it’s started to gain a proper reputation as the place to play for either up and coming bands, or the more established artist looking for somewhere cool to road test new material. It has the vibe of somewhere insanely sweaty when full and it turns out to be perfect for our visiting Canadian friends. Drummer Aaron Morrice expertly navigates a cluttered stage to get to his kit, while Niva Chow emerges on stage left behind a table of electronic trickery and a theramin. Bass wielding frontman Rob Higgins stands tall, centre stage, and the band tears straight into ‘RIP’, the grumbling and bass heavy opener from their current album. A terrific alt-rock groove is quickly established – much like a more tuneful counterpart to Seattle’s Mutiny Mutiny – and in less than a minute, they’ve really established a presence…and it’s also obvious the venue has excellent sound quality for somewhere so fabulously informal. ‘RIP’ might lack some of the subtle textures of it’s studio recording on this occasion, but between the hefty bass and an intricate rhythmic edge, it makes for a strong opener.

‘Race To The Middle’ increases both the volume and groove and while it isn’t always obvious what tricks and gadgets adorn Niva’s desk, she’s increasingly busy filling spaces with electronic sounds that take the place of a second guitar – something integral to the Beloveds’ core sound. Picking up the pace, the garage rock strains of ‘I Tried to Leave’ gives JC Sandoval an opportunity to thrash at his guitar, throwing out angular sounds as he goes, meaning the first part of this set has already covered a lot of stylistic ground. From their Chris Goss produced ‘Enduro’ record from 2014, ‘Olympics of No Regard’ sounds much better than the studio version, combining desert rock rifs with Rob and Niva trading off vocal phrases, while Rob slaps at his strings in almost a jazz fusionist’s manner. Watching him create something so intricate while still retaining the pointed anger of stoner rock sounds is absolutely fascinating, especially when seen at close range. The Sonic Youth-ish thump and grind of single ‘Who Wants To Know?’ comes over with a shrillness and unshakable presence, as if the band are winding tension through each verse, before ‘Rugged Casual Sports’ taps into something with serious energy and speed, giving Aaron a serious workout on another older number. ‘These Data’, meanwhile, mixes heavy basslines with some terrific electronica in a set highlight. It’s one of those tunes that works fine on record, but watching Niva tweaking gadgets and manipulating a theramin, it becomes about a hundred times better. Seriously cool.

Pulling everything to a close with ‘Candy Coated’ (a number dating all the way back to 2010), things take on a slightly looser, jam based feel, while Rob and Niva take advantage of the space within the audience, leaping off stage mid way, allowing for a much closer look at how Rob swings his bass in a muscular manner and also the way he and Niva interact with each other. It’s obvious they’ve been working at making their angular noises for a long time now, getting better with each passing year and, as such, their performance is incredibly natural. In all, a great end to a great (if too short) eight song set.

This evening, Dearly Beloved really showed talents for both variation and power within performance, as well as a genuine sense of professionalism. These guys so obviously put the same intensities and intricacies into their live show every time, no matter how big the audience, so if they’re on a bill at a venue near you, make sure you see them. They’ve got more than enough talent and presence to ensure your time won’t ever feel wasted, even if you mightn’t be familiar with the material. 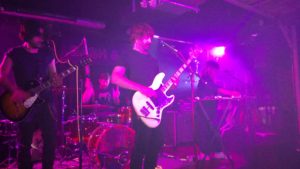