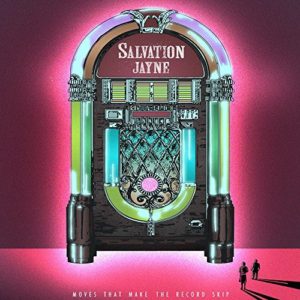 Salvation Jayne capture a sound that mixes honest old-school hard rock with more than a touch of blues and sound as if they’re ready to come out fighting. Following an intro – ‘The Motel’, an unimaginative selection of (possibly uncleared) samples – ‘Burn It Down’ sets about pushing Jayne’s musical manifesto straight into the faces of their listening public. The guitar riffs are huge, but the grumbling bass is even bigger, and that’s before frontwoman Chess Smith takes centre stage. In terms of vocal pipes, she’s no Sass Jordan, but then few are; after the first verse, however, it’s clear that she’s a near perfect fit for the job in hand, blending melody with plenty of grit, resulting in a performance that gives off a hard edge with an underlying sweet tone, which suggests she might just be able to nail whatever styles come her way. The music, meanwhile, carries along it’s hard and driving path, as the main riff collides with a hard snare while still keeping enough room for a little melodic interest. Those who like a bit of Blues Pills, or possibly even the more melodic interests of Brighton’s Black State Highway, should like this a lot…and things are just getting warmed up.

‘The Jailer’ stokes up the – very welcome – slide guitar elements, thus giving things a grubby, bluesy edge, with six-stringer Holly in the driving seat throughout. Chess approaches her performance sounding like Private Life’s Kelly Breznik, but thankfully much more tuneful. The combination of that voice and a tough riff throughout very much shows off SJ’s musical guts. While the chorus is relatively big, it’s not always so memorable; this has nothing to do with the songwriting per se, but more to do with the chosen final mix, since most of the guitars drown out most of everything else. In fact, the aggressive slide tearing through the right speaker channel might give you a reasonable idea of the band’s live grit. Moving on, ‘Thrillride’ brings more of the same spit ‘n’ whisky gruffness, but stokes up the bass, showing Dan Lucas to be an integral part of the band. A case of “don’t fix what ain’t broken”, if you liked the previous tracks, there’s more to love here, but in many ways, it’s the EP closer ‘Whorehouse Down On The S.E.’ that represents the band’s talents in a better fashion. Armed with a hard driving riff, mixing the rock with a slightly bluesy edge, things get off to a very good start and moving into the main riff, the balance between a 70s heaviness and over-riding melody is spot on. Perhaps most importantly of all, this number does the business and exits with a no muss, no fuss attitude in almost exactly three minutes – no flab, no excess, just honest, straight down the line rock – and for the live audiences in particular, this is sure to come as a welcome treat.

Yes, you’ve heard it all before, but there are several moments on this EP that suggest Salvation Jayne are capable of delivering the goods better than most – the slide playing is especially enjoyable and the production values are so much better than some of the band’s peers (hey, The Riven, we’re pointing a stern finger in your direction). The four songs which make up ‘Moves That Make The Record Skip’ sometimes sound kind of predictable on record, but cranked up and in the right frame of mind, the material is certainly no less enjoyable for that. It maybe short, but for those who like their hard rock with an old soul, it’s a recommended spin for sure.