At approximately 7:30pm, a man who looks like a thinner, young John Coghlan takes his place behind a small drum kit. He is swiftly joined by two bearded men who make up the core of the night’s supporting act, The Kings of Spade, a band mixing blues and soul with a massive injection of hard rock. Expecting another run of the mill blues rock band (an epidemic of which has infected the world by summer of 2017), a figure sporting a bright red mohawk takes the mic centre stage.

A good frontperson can really make a band, and this is very much the case here. Far from being one of your many average blues rockers, this band have some great tunes…and rather more importantly they really know how to work a stage. Frontwoman Kasi shows off a great set of vocal pipes and also a great rapport with the audience. They’ve seen Stonehenge and are thrilled to be in the UK – and it shows. Tearing through various songs from their self-titled album, ‘San Antone’ and ‘Sweet’ come across so much better than their studio counterparts, while ‘Strange Bird’ – carrying an important message of being your own person – is a particular highlight. Covers of ‘Piece of My Heart’ and ‘House of the Rising Sun’ show the band’s range a little further and sound great, even if the latter is hard to take seriously if you’ve ever seen John Otway’s live performances of the track. The audience are more than appreciative, too and especially responsive to the band’s acknowledgement that we aren’t especially there to see them. Overall, this has been a superb half an hour and a real pleasure to witness a support band who are doing more than going through the motions and killing time.

King’s X haven’t been to the UK in almost seven years and by this time their fans are more than keen to see them. Their choice of London venue this time around allows more fans that opportunity, too: their two previous visits to the capital have involved gigs at the Camden Electric Ballroom, while a slightly earlier trip involved a show at Scala. All of these venues are unsuitable for wheelchair users so it’s fantastic that, after so long, a suitable venue has been chosen thus allowing for a far more inclusive evening. Bravo!

After a surprisingly short interval, the very distinctive frame of King’s X frontman Doug Pinnick wanders across the stage to a pair of sizeable bass amps. Turning his back to the audience, he hammers at a couple of strings, turns the knobs on his amps up to eleven, gets a decent level of feedback hum and with Jerry Gaskill (drums) and Ty Tabor (guitar) in place, this more than amplified trio launch into a very heavy rendition of their regular set opener ‘Groove Machine’. Pinnick’s bass takes the lead and weight, but never to the expense of Tabor, whose chugging and almost grungy riff is the ultimate head-nodder. A world away from the retro harmonies of the earlier King’s X records, this is the ultimate groove for the live setting. Expecting something of similar weight to follow, it’s somewhat of a shock when they switch gears immediately for a rather boisterous run through ‘The World Around Me’. With emphasis on riffs over harmonies, this tune from the underrated fourth album allows Tabor to explore more complex guitar work, but it’s more than obvious his vocal mic is turned down far too low. This isn’t going to spoil the set, of course. Other numbers from the same album – a little later in the set – provide two of the evening’s big highlights: the brilliant ‘Lost In Germany’ strikes a perfect balance between melody and hard rock groove while the more pointed ‘Black Flag’ showcases the power trio format perfectly. These numbers, unsurprisingly, are massively welcomed by the bulk of the audience. 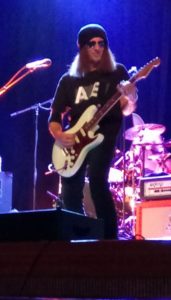 A genuine high point, the slow and neo-psychedelic ‘Cigarettes’ makes a great feature for Pinnick’s live voice in a truly jaw-dropping rendition, before a later run of songs taken from 1996’s ‘Ear Candy’ and the career-defining ‘Gretchen Goes To Nebraska’ provide what’s almost certainly the most solid part of the gig. With ‘Looking For Love’ and ‘A Box’ home to some great guitar sounds and a couple of Pinnick’s strongest vocal performances for the night, things really hit their stride, before the familiar opening riff of ‘Summerland’ makes the venue explode. As with ‘The World Around Me’, some of Ty’s harmonies get a bit lost under the sheer force of everything else, but he makes up for this with some terrific guitar playing. He’s still in possession of one of the most distinctive and original tones of his generation and hidden behind a hat and sunglasses, he’s obviously happiest allowing his instrument to do all of the interaction this evening. During an extended ‘Over My Head’, the audience is given ample opportunity for participation, while Pinnick leads the groove with some terrific bass work and a hefty gospel influence in his vocal. Throughout a lot of the evening, he’s minimised on stage banter, preferring instead to let the songs speak for themselves, but here, he takes time out to muse upon the state of the world and the problems caused by religion. He’s angry; we’re all angry…and justifiably so. Given that religion is so often used as a tool for such atrocity, it’s no wonder this once devout man is just another agnostic as he approaches his sixty-seventh year within the world. Watching him command the stage – and in fantastic shape – it seems almost impossible that he’s any more than fifty. Closing the main set, a furious ‘We Were Born To Be Loved’ shows off chunky riffs and inventive playing, with the trio hitting the complex time changes and various stops with ultimate precision – almost everything there is to love about King’s X is contained within these six minutes or so, and this evening is no exception.

A two song encore brings a solid but predictable ‘Dogman’ before ‘Goldilox’ (the evening’s only nod to the debut) is handed over to the enthralled audience to handle all vocals. It’s both a fitting and atmospheric end to a seventeen song performance that seems to have flown past in the blink of an eye. While there’s no ‘It’s Love’, ‘Mr. Wilson’ or ‘Pleiades’ – and it would have been very cool to witness the devastating bass groove of ‘Skeptical Winds’ – the set is both thoughtful and well-balanced. It isn’t perfect, but therein lies the key to a great live performance.