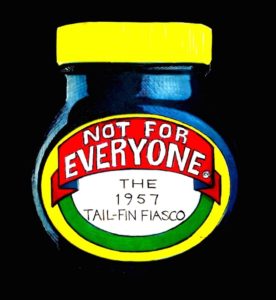 Even before you hit the play button, their usual pithy humour is staring you in the face. ‘Not For Everyone’ boats the title in a quasi-smug way, already warning the unsuspecting listener that the music within holds no truck with the contemporary at the time of its creation, while simultaneously daring the knowing listener to raise an equally knowing smile. It’s also somewhat of a warning, in fact: fans of the previous album (and subsequent EPs), might not always like what they hear.

The true standout track, ‘Vista Familiar’ immerses the listener into a world of great 70s pop: a touch of mid 70s Doobies appears to get a nod alongside the kind of travelogues within Gerry Rafferty’s ‘City To City’ album, embellished by a very Neil Young-esque harmonica line. The mix of voice and piano is as perfect as Tail-Fin can manage this time around, while the bass accentuates the real heart within the song. Those who love the usual character-led tales will have another favourite track in a heartbeat. Although a touch more forlorn, ‘Cold Cuts’ also presents the usual TFF traits rather boldly: there’s a wordy lyric that looks back ironically at a past that may not have genuinely existed and a moody piano line presents a measured melody abetted by a steady rhythm section. The effect is like hearing an old Andrew Gold tale dressed in Becker and Fagen finery, except perhaps not in as polished a way as the band have been in the past. In fact, rather than an instant gratification, it’s almost as if they’re goading their small but devoted fan base with something less hooky. Rather predictably, though, the song burrows its way under the skin eventually and should be an enjoyable listen for fans of the style, despite an occasional vocal wobble.

A soft piano and acoustic guitar makes the humanity within ‘Fisherman’s Tale’ evident from the outset. The addition of the rhythm section isn’t intrusive since this tale of goodbye isn’t as much about the music as the lyric itself. “Goodnight Jimmy Roe, goodnight” calls the narrative in this aching tale, raising its metaphorical glass to another memory. There’s little to nothing here that could be attributed to the usual Dan obsessions, but despite that, it’s another of this album’s shining moments. The music is familiar yet just a stretch beyond recall, while the simple tale is very much the kind of thing that made Billy Joel so appealing circa 1977. It’s proof that, just sometimes, the simple ideas are the best.

Moving on, ‘The Claw of Charrua’ presents an easy listening tune, kind of like a lounge act playing something by Steely Dan with a very European bent. It’s hard to believe that without the aid of a time machine to 1957 that such arrangements would be anybody’s bag but, obviously, this is a glaring example of how this band just don’t give a flying fuck. Luckily, there’s sterling help from one of the best vocals on the album; unsurprisingly, it’s where the notes of ‘Kamikiriad’ era Donald Fagen come through at their most brazen when things work out for the best, pushing the tune towards something rather more wry and (almost certainly) never without irony. A better track all round, ‘Bigger Ships’ comes with the guts of superb 70s pop, with a measured bass augmented by acoustic strums and retro piano. Over an unfussy backdrop, the voice rises with another tale of lost souls seeking change and/or adventure. “I’m waiting on a storm” calls the protagonist in this scenario, but with the forecast firmly set to smooth, he’ll have a long wait. Although not as quirky as Tail-Fin have been in the past, or – indeed – quite as obtuse, this throwback to the days of AM radio pop is another of ‘Not For Everyone’s stronger offerings.

Elsewhere on the album, there’s even less of a consensus to old Steely Dan homages. ‘Swings & Roundabouts’ is a semi-acoustic stomp that eventually morphs into well crafted retro pop – not your typical TFF work, but incredibly catchy, while ‘The short ’65 Rioja’ works a stabbed piano against a punching rhythm, introduces a Duane Eddy inflected guitar solo and – just perhaps – most surprisingly of all, structures a tale of doomed relationship against a fairly unsuitable tango. It never really stretches beyond an okay listen; in direct comparison to the brilliant ‘Swings & Roundabouts’ and classy ‘Vista Familiar’, it definitely has the air of something that maybe needed a bit more polish.

’15 Hands’, on the other hand, rattles along as if swallowed by the ghost of sixties British Invasion then regurgitated somewhere in Alabamha. Heavy on the piano and harmonica, it gathers plenty of pace but, in terms of song, is fairly far removed from those sounds that probably pulled you into the Tail-Fin universe back in 2012. It’s one of those tracks that’s best described by the less imaginative as “a bit of a grower”, yet at the same time, it’s unlikely to become a firm favourite, while ‘Commodore Rooms ’75-’76’ trades in the earlier tango for a waltz, as a typical reminiscence takes us back a couple decades. While not having the sunny demeanour of ‘Clean Break’ or ‘I Love The Smell of Bacon’ (the latter, from the debut LP, is arguably the band’s best Dan homage), it really pulls in the listener thanks to both a strong narrative that, again, is chiefly concerned with some deep soul searching and a great harmony vocal. Last up, the increased use of acoustic guitars this time around becomes even more obvious on ‘Happier With Horses’ with a soft, ballady affair that could have been inspired by Jackson Browne or James Taylor, despite a few side glances and references to the decade in which those guys came to prominence. It’s another case of a protagonist looking back at the past through a sort of rosy filter and the band counter this with a wonderfully thoughtful and smooth arrangement, bidding the album adieu with what might be the only song to actively name-check Captain & Teneille…

As previously suggested, overall, ‘Not For Everyone’ isn’t quite as inviting or as sunny as Tail-Fin’s first full length. Not all of their musical ideas completely work, but at the same time, it’s interesting to hear they’ve not just rested on their laurels and relied quite so heavily on a Steely Dan obsession. Whereas previously any suggestion that The 1957 Tail-Fin Fiasco were “not for everyone” meant “certainly not for those with a Steely Dan aversion”, ‘Not For Everyone’ (the album) is true to its word: it really is “not for everyone” – some Tail-Fin fans surely included. It’s the epitome of “difficult second album”, but there’s a moderate chance they’re happy with taking such a contrary and potentially controversial stance. In short, there’s some gold here, but also a couple misfires and the occasional genuine head-scratcher, so be prepared to be bamboozled and entertained in equal measure. As records go, it’s rarely bad…just wilfully different.