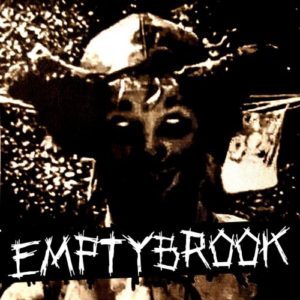 Musically speaking, there’s a core of something here that should be amazing – especially given that the lead track ‘Repeat’ kicks off with a fantastic riff that’s three parts stoner rock and one part groove metal. Within seconds, the brilliant riffing is under siege from an insanely heavy drum sound that’s so under-produced that the amount of reverb and density could floor the unsuspecting listener. For extreme stoner and doom fans, these elements carve out a solid sound, but if you’re the kind of person who’d baulk at a lo-fi production or – especially – a scary vocal, forget it. After a few bars, vocalist Ollijuhani steps up to the plate and seems thoroughly intent on clearing the room. His chosen approach blends throaty hardcore shouts with a slight influx of scratchy black metal rasps. It’s not the kind of voice you’d instantly associate with the chosen riff, but Emptybrook plug on, regardless. After a couple of minutes of intense riffs, things never really lighten up and with this track, the band show some of their most extreme tendencies. It’s a track that, for some listeners, is likely to stir up very mixed feelings.

The amusingly named ‘The Grand King of Fuckery’ makes a huge entrance with discords and clatter, before dropping into a tough groove that borrows a grungy aesthetic to compliment a heavy sludge rock riff. The sense of drive that powers the track is much better suited to Ollijuhani’s unrestrained growls and gasps, while the overall tone occasionally has hints of other underground noisemakers Pineal, Korakuma and even Spacebeast. For the number’s second half, things switch gears to incorporate more of a swing to the riff, but from start to finish, it never loses any intensity. For those who somehow hoped for more noise, the band are happy to oblige. Choosing to couple a more hefty riff with a wretching voice that yelps apace against the music, it’s all very tough going, but somewhere deep down, there’s a solid musical idea trying to fight its way through a very rigid structure. Once again, it won’t be for everyone and somewhere in Finland, a band smiles wryly.

With those first two tracks having firmly established the Emptybrook musical style – and to some degree, a formula – ‘A Song For The End of Days’ slows the pace to approximately half speed. The riffs crank and lurch like the meanest doom, complimented by a dead weight of a drum line, while the voice spews various noises as if demon possession had taken place. The chug and crank of the guitars provides constant entertainment in a classic doom way, but there’s nothing to latch onto beyond a massive riff. Somewhere beneath the sludge, bassist Jaakko throws out meaty sounds that are more audible than before and while the band are entirely immersed in their sound, it’s challenging… ‘Smoking Weed With Numbskull’ flips everything on its head and centres around a faster riff that’s appropriated from the earliest Melvins. The increased pace makes the production values appear more sympathetic, while at the same time giving drummer Pasi more of a workout. There might not be much of a melody and obviously Ollijuhani is on hand to make sure this never gets too safe, but in terms of extreme stoner grooves it’s pretty cool. Wrapping things up, ‘Hit The Wall or Hit The Ground’ brings several minutes of weighty sludge that’s both oddly mixed and frighteningly intense. While not presenting anything markedly different to a couple of the previous tracks, it gives a final opportunity to be floored by a heavy drum and heavier guitar riffs. Never pretending to fuse doom and sludge with anything more easily digested, Emptybrook crank various slow riffs throughout, eventually ending with something that sounds like their batteries are fading. Heavy as a very heavy thing, the word heavy almost feels like too flippant a noun in this case.

On first listen, Emptybrook do not seem especially listenable. After familiarising yourselves with their lo-fi DIY noise, against the odds, things improve and – if nothing else – they’re certainly intent on crushing everyone and everything in their way. On the basis of how guitarist Ilkka clearly knows how to work massive riffs, this EP should be absolutely staggering and f you are only interested in riffs, then it’s all certainly worth twenty minutes of your listening time, but with those vocals, these tracks are only really going to secure the cultest of audiences. In stoner terms, Emptybrook are very raw; their music constantly stinging like an open wound. If you fancy the challenge, they’d probably love you to take them on.