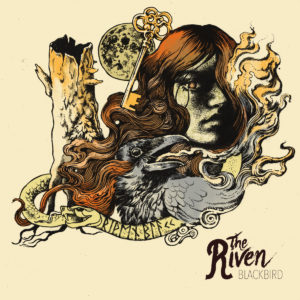 A lot of blues rock bands have surfaced in the five years between 2012 and 2017. Classic Rock magazine’s constant championing of bands like Rival Sons and Blues Pills have obviously helped fuel the fire, but it has to be said, there has always been a core of rock fans clamouring for such old fashioned sounds. London based band The Riven wade into a somewhat saturated market with their debut EP ‘Blackbird’, but do they have anything to make them stand out from the crowd?

Not immediately. The introduction to ‘Ain’t No Doctor’ brings a rumble of drums under some distinctly muddy guitars and it’s clear that although the band were probably aiming for a live sound on these recordings, the production is awful. With the chunky riff and driving rhythms abetted by a shamelessly old fashioned vocal from Charlotta Ekeberg, it’s more than apparent there’s a half decent track trying to emerge from a swampy sound and that these guys are totally committed to the style, but it’s like listening with your fingers plugged in your lugs. Looking at the positive, though, there’s a strong chorus and a few pleasing guitar leads (which really deserve to be more audible), while a very tough bassline throughout signifies Max Ternebring is a great player. Fusing the bluesy edges with a pacy boogie backline, ‘Tower’ shows off more of the drive within the four piece giving Ekeberg more space for vocal manoeuvres, while drummer Olof Axegard hammers at his kit with gusto. Just as it seems as if the energetic boogie is to take up the whole of the number, the band fall into a spacy bluesy sound that’s even more retro. With reverbed guitars howling and a counter vocal tapping into something a little Zeppelin-esque, it’s easy to imagine that during live performance, this could be stretched to become a real tour de force, especially given that, by this time, the fusion of gutsy music and voice seem more in sync. Obviously, the production values are still a huge issue, but looking past that, it’s easy to imagine that fans of Blues Pills might get a big kick out of the material.

‘Killer on The Loose’ kicks off with a wordless vocal and punchy riff interspersed with fuzzy leads, and once it finds its feet, the mix of rock and blues fires up a typically old fashioned sound. Shifting into the chorus, the band adds more of a melodic rock hook to their tried and tested blues-edged noise. In terms of hooks it’s not especially huge, but then it would be hard to out-do the bass part that sits at the heart of the track. Once more, Max shows that he’s integral to the end sound…to the point where his playing so often takes on a lead style, much like Geddy Lee on the Rush debut. Musically speaking, this is better than the opening pair, although those not entirely besotted with retro blues rock mightn’t be so impressed, especially taking the rough ‘n’ ready sound into concideration. By placing another lead bass against a slightly off-kilter rhythm, ‘One Last Time’ gets off to a good start and the vocals are among the EP’s best, but it’s with the instrumental break that things go to the next level. The interplay between the bass and lead guitar is fab and the howling leads come with the kind of Telecaster echoes that have helped make the Led Zeppelin debut remain so vibrant after so many decades. Granted, there’s nothing here you won’t have heard hundreds of times, but it’s got a lot of good ingredients.

Challenging ‘One Last Time’ for position of best track, the big ballad – and title track – goes a long way to making this EP worth a listen (despite the production, yet again). Weaving a haunting melody, a warm bass and almost psychedelic guitar lines begin in a very understated way, thus allowing the vocal to take the lead. Bringing in the drums for the chorus, things toughen up suitably but do so without losing the overall feel. It’s here – and pretty much only here – that Ekeberg reveals herself to be more than a husky blues wailer; the balance between rock elements in her voice and soulful cry is pitched just right. Instrumentally, the rest of the band work hard to bring this early 70s throwback into the present and a mix of sturdy rhythm work and a wah-ed lead are made of timeless stuff.

It’s unfortunate that the end sound of these recordings proves such a drawback. Hopefully it won’t stop new people giving these songs time and just a little patience. Sure, there’s an odd contrast between the music and vocal and the production sounds like mud, but in terms of drive and commitment, The Riven tick a lot of boxes. As far as debuts go, it’s got promise. Here’s hoping that should they reach that all important second record, their talents can be heard with the kind of crispness the material really needs.