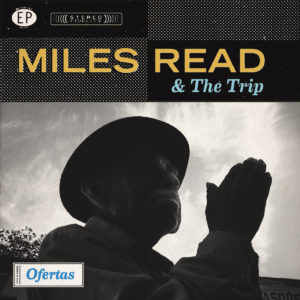 Miles Read is a blues oriented singer songwriter from sunny San Francisco. With his band The Trip, he exhibits a broad spectrum of talents on his 2017 release and the six tracks on ‘Ofertas’ are steeped in tradition. In just over half an hour, Read explores various types of blues, a little Americana and sometimes even a deep and spooky sound that echoes the both the heartbreak of UK performer Charlotte Carpenter and the moodier aspects of Old House Playground warming up. Right from first listen, this release asserts itself as a fantastic one.

Going deep into the blues, ‘Kingpin’ starts this release off in fine form. The guitars chug a slow riff, heavy on the rhythm. This gives the number a solid grounding which in many ways is perfect for the job in hand, especially given the chosen live sound of the recording. The rhythm section stamp out a slow groove and an old style organ fills space; all the while Read delivers his chosen lyric in a very soft but focused way. The tune never rushes – it just concentrates on keeping a steady groove; it isn’t exciting in an obvious or traditional sense, but it’s certainly very appealing. The occasional forays into loud guitar flourishes help to lend a necessary amount of edge, while the few more forceful organ moments are particularly classy. It might take a few plays to really get the measure of this number, but once it’s got you, you’ll be really hooked.

‘Strange’ takes a sidestep into rockier territory, with Read’s blues sounds almost completely sidelined by bar-room rock. Although not an entirely expected move after the opening track, it’s more than enjoyable fare. The rhythm guitars come loaded with a world of mid-70s Stonesy swagger – like a tougher, more honed version of Watts – while the featured lead break comes with a huge presence and a bagful of melody. Factor in a rinky-dinky piano, anchoring bass and stomping rhythm and it has enough of everything to guarantee a fun listen for fans of the style. …And then, just as you’re expecting the rousing finale, it stops dead. Next up, the colder and moodier ‘I Am At War’ brings a world of staccato guitar chords and hushed, slightly crooned vocals. A steady voice combined with a heady bass drum and atmospheric slide guitar sets things up marvellously, before moving into a wordless hook where Read howls as if this isn’t so much a song as a personal exorcism. “A little whiskey might dull the pain”, he suggests…and the repeated refrain of the title is a more than handy device to remind the listener that this tune is, indeed, a celebration of internal torment. It sounds mad to suggest such a thing, but the closest description of this track would be to compare it to a U2 ballad reworked by Old House Playground, then dusted down with Charlotte Carpenter‘s unashamed confessional style. It’s dark and moody for sure, but it’s a genuinely great musical workout from all concerned.

Just as ‘Strange’ wandered into unexpected bar-room rock, the bristling ‘Amen’s chief concerns are to uplift the listener after such a moody number. It does a fine job; here, the big influence comes from more of a funky blues rock style, as if Miles had spent a week listening to John Mayer before writing and recording. Stylistically, it’s very different from all each of the previous tracks and it’s at this point it becomes more obvious that this performer who could turn his hand to pretty much all sub-genres of bluesy rock and come out winning. Although just three minutes long, it’s a great exercise in tightness, especially in the way a funky and fluid bass tries to best a heavy organ line for dominance, while the guitars occasionally chop through with a heavy reverbed style. In terms of song writing, this comes with a much bigger hook and even Read sounds like he’s having fun. There’s no questioning he’s in great voice. For best results with this short and sharp funky jam, turn up the volume…it’ll be a challenge then on for you not to be swept along with the groove.

Switching styles yet again, ‘Rose To Your Grave’ goes for acoustic sounds on a number that brings a few Americana traits to the table. The sparse arrangement allows for a natural vocal to eventually introduce a confident cry, though the performer never seems to let his voice mask too much of the very rhythmic musical base. It might seem somewhat slight after the brilliance of ‘Amen’, but the key is in it’s simplicity. Those looking for something with a few more teeth, meanwhile, should be entertained by the closing number, ‘Reason For Dying’, a slow and crawling, dark workout that sounds like the creation of a very old soul. A simple guitar line is drenched in reverb; the sparingly used drums add a heavy structure, while the voice lurks somewhere beneath, heavily treated with studio effects that really add to the generally spooky vibe. In place of an expected lead break, the guitars howl like wolves, crying out soaring simple and notes, ensuring this is almost all about the presence of the drums and that voice. Eventually, of course, the lead guitar rises from below and the hard but fluid playing comes across like a tough homage to Clapton circa ’85. tempered by the soulful qualities of Gary Moore‘s 90s work. In terms of solos, it’s the EP’s highlight, but looking at this track as a whole, the appeal is far broader than that one great solo. Pushing beyond the six minute mark, a combination of slow burning tune and great vocal performance ensures it never drags. It really is superb.

‘Ofertas’ is one of those releases that manages to be both varied and consistent. Whether tackling spooky blues, acoustic singer songwriter fare or a more commercial blues-rock style, Read’s talent for timeless styles and arrangements comes across every time. Whether you’re an old soul who loves a retro sound or someone looking to hear an underground musician who should be better known, this is for you. These six tracks add up to being one of the best finds of 2017’s first quarter. Don’t miss it.