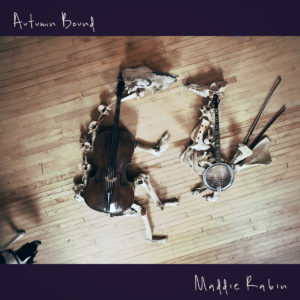 ‘Cold Smoke’ gives a reasonable indication of Rabin’s musical interests, as a live sounding tune driven by banjo quickly takes a hold. Settling into a familiar Americana tune – the roots of which could be centuries old – the banjo carves out a semi-busy melody, while a cello gently moans in the rear. Such mournful sounds require a similarly mournful lyric…and it is so, as Rabin tells of “cold winds blowing through [my] skin” and the arrival of harsh weather. The main melodies never change from the outset, but with the presence of many understated harmonies and a clear lead vocal, it’s soon clear that although the tune is solid, this has been all about the voices and the way they weave within each other. Better yet, ‘Cello Song No. 1’ places much more focus upon the voice, as Maddie allows a more natural edge to her performance to take centre stage. Her vocal wobbles constantly, giving a genuine uncertainty to the lyric which slowly unfolds, while beneath the voice – as the title suggests, a cello plays out a steady melody, heavy on the pizzicato strings, occasionally allowing a full bowed moodiness to fill space. Although musically downbeat, there are themes within the lyric – seemingly concerned with a long drive, more coldness and expectation – that connect this track tightly with the opener.

While the first two tracks allow the listener various glimpses of an introspective style, it’s with the title cut that we’re fully let into Maddie’s world. This track, featuring just voice and moody cello is spectacular. Following on from the previous number, the slow and downbeat mood is very much one you’ll love or hate; Rabin sounds in much better voice throughout, as her tones curl across a wordy lyric, weaving various unexpected mental pictures. There are hints of travel and displacement once more and even times where Rabin comes across like an alt-folk version of Rebekah Higgs. All things considered, this is easily the EP’s finest three minutes – it isn’t upbeat; it isn’t catchy, but given time, if you’re intrigued on first hearing, you’ll grow to love it.

‘Go’ very much fuses Americana sounds with the darkness of the title cut, resulting in an almost spooky voyage into folk and roots sounds. It’s the hardest track with which to connect, in that the banjo is simpler, occasionally even becoming intrusive, while the gradually rising rhythm against a slightly off-kilter harmony creates a less than obvious hook. The cello is very much the high point as it moans and creaks below the lead vocal. There’s a calmness here that is almost unsettling, before ‘Heading Home’ – as if to bring everything full circle – pushes the banjo back to prominence for something much closer to pure Americana. The cold sound of the banjo has a bluegrass-y air, but it’s busier approach never changes Rabin’s own style as she delivers each line of this final piece with a soft and mournful air that – yet again – conjures up thoughts of being lost somewhere on the road in a snow drift…with home near and yet so far. There’s brilliance in the minimalism; as before, a percussion free approach only draws attention to the voice even more, while the stripped down arrangement lends a timeless quality.

Although only a short musical journey, this EP feels very full in its aims, with the majority of the tracks weaving a very downbeat vibe. Each one feels like a complete narrative in itself, but it’s when heard as a whole, the material’s charm really comes through. The sparse arrangements lend so much atmosphere to Rabin’s lyrics, but the omnipresent strings are what really makes this recording so characteristic. A release to approach with open ears, ‘Autumn Bound’ shows all the signs of something that’ll improve with age.