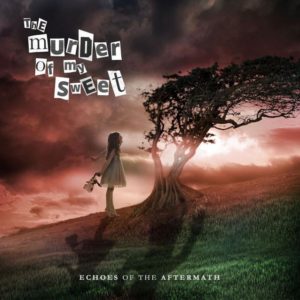 With that in mind, hopes were not high for the follow up. However, 2017’s ‘Echoes of the Aftermath’ is very much an improvement. The fact that a concerted effort has been made to pen a couple of great choruses is a good start and the fact that Angelica Rylin is in better voice all round is also very much a plus point. Of course, unless you’re particularly enamoured with the kind of music churned out by the Euro metal brigade (Nightwish, Tarja et al), this is still a recording that’s best tackled two to three tracks at a time if musical fatigue is to be avoided.

Never a band to think small, ‘Sleeping Giant’ starts big and gets bigger still as the arrangement stomps across six minutes as an opening statement. Driven by synthesised strings and stabbed keys that recall the works of Dream Theater and Nightwish, it sets up a huge musical backdrop before the introduction of the lead voice ensures no momentum is lost. Rylin runs with the material she’s given, belting each line with confidence, before an attempt to take things to the next level, when extra backing vocals and an occasional vocal counterpoint are ushered in. It’s easy to hear what they hoped for on the chorus, but with a world of voices set against a heavy-ish riff and even more keyboards, The Murder of My Sweet eventually find themselves in danger of being swallowed up by their own self-importance. At just before the three minute mark, it reaches maximum bloat, and then almost everything for recycled for a second round. Despite some decent ideas (Daniel Flores’s keys are quite cool in places), this number would have been more effective chopped down to about half the length.

Lead single ‘Personal Hell’ follows with a suitably chunky riff backed by a world of orchestral keyboard sounds, before falling away to allow something more accessible to take root. Although still on the large side, this tracks verse – a montage of tinkling keys and big vocal – adds more of an AOR slant, which is more than welcome. Rylin tackles each line with ease and with more melody than she ever demonstrated on ‘Beth Out of Hell’. Reaching the chorus, both ends of TMoMS’s musical scale meet somewhere in the middle, presenting something that wouldn’t be completely out of place as a Eurovision entry circa 2012. Eventually, Christopher Vetter dispenses with the chugging styles and offers the beginnings of a soaring lead solo, but only to have his efforts drowned out by a world of pompy keys. There are elements of something enjoyable here – particularly in the vocal depot – but much like the opener, there’s always a feeling that less, as they say, might’ve been more. Luckily, ‘Racing Heart’ takes the bones of the band’s preferred styles and really ups the stakes song-wise. While stylistically it is familiar turf, there’s a great chorus, some solid, choppy guitar work and the result actually sounds like the work of a band who truly believe in what they’re doing on their own terms as opposed to merely recycling a Nighwish-ish style by rote.  In fact, it’s almost a saving grace for this album alone: Rylin puts in a great performance; Vetter plays well and for bigger (much bigger) melodic rock, it’s better than the band have ever managed before.

Following a necessary breather, it’s on to track four… Despite having best intentions and an okay chorus, ‘Cry Wolf’ is dull, pedestrian symphonic metal that not even Rylin can save. The big problem with this track is its lacking change of pace. When deep in a mid paced rut, the over-reliance on loud, pompous keyboard sounds starts to grate. The fake string stabs are always there, parping incessantly, eventually becoming a distracting irritant. Are those loud keyboard sounds more important than hooks, melodies and the chorus the band have so clearly attempted to write? Daniel Flores so obviously thinks they are… Much better, the title track jostles with huge drums against a cleaner guitar, before settling into an enormous melodic rock chorus. Yes, it’s taken elements of Nightwish, Evanescence and late period After Forever for inspiration, but what it does, it does very well. There’s a definite divide between verse, chorus and pre-chorus – an approach that makes the number move along nicely. The guitar solo isn’t the most inspiring, as Vetter doesn’t seem to get past something that sounds like a warm up, but at least there are some audible lead guitars. ‘Flatline’, too, aims to impress with a big chorus but doesn’t do such a good job. While the band have found their groove, there’s nothing here that really stands out in the song writing, leaving everything to an instrumental break to differentiate between this and most of the other tracks. Vetter steps up to the plate with a widdly solo, but – in all fairness – it’s not great. Rylin is by far and away the best performer on this track…and as some of you will be aware, she’s been given better material to work with outside of this band.

Having reached the halfway stage, it’s time to pace up and down your living room and take stock of everything you’ve heard. At this point – assuming you’re enjoyed it so far – you’ve actually heard most of the best material. You’re now also best advised to put the kettle on since, obviously, (a) the second half doesn’t scale anything back and (b) it contains a couple of really horrible tunes. Not just run of the mill horrible, but really bloody nasty. In fact, the second half of the album is bookended by both of these misfires: ‘Loud As a Whisper’ is a horrid, theatre inspired tune that sounds a lot like a cast off from the previous album with Rylin going through the motions, while ‘Inside, Outside’ might as well be aimed at musical theatre lovers (the skip button comes in handy for both – the least said about the latter, the better). Sandwiched somewhere between, ‘Ode To Anyone’ doesn’t bring anything new to the album, preferring instead to retread stodgy rock with overly loud keys and the more than occasional Euro metal homage. If you like that, it’s probably fine…but you’ve heard it all before – and only fifteen minutes ago, to be fair.

An improvement all round, ‘Shining After Dark’ teases with big AOR elements beneath the bombast, on a number that offers one of the best couplings pre-chorus and chorus. Yes, it’s still unashamedly Euro, but for what it does it’s enjoyable enough. Rylin is confident, channelling a little more of the upbeat feel of a melodic rock past, while Flores really hammers the keys. ‘In Risk of Rain’ follows suit with both a melodic ear and a sense of presence without force. Its combination of chopping guitar lines and punchy rhythms adds a pacey quality sometimes missed from this subgenre and a decent chorus gives the improved tune a great send off. The definite highlight from the second half, ‘Go On’ threatens a more modern pop sound at the outset with a selection of wavering keys and filtered voices, but soon retreats into a rock comfort zone. Somehow, though, despite showcasing a parping keyboard that’s on hand to (unsuccessfully) replace a string section, it’s a worthwhile listen. Huge guitars occasionally crunch through the blankets of sound and while everything is stylistically predictable, Rylin steals the show with a huge vocal that’s almost stage worthy. As before, she’s not so much channelling a Broadway musical, but rather more aiming for a Eurovision runner up. In terms of its aims, it works well enough; everything is perfect for her range…and eventually, winning out against bombast, a chorus hook takes enough of a hold to make this one of the more memorable numbers. It isn’t as good as ‘Racing Heart’ but then it was unlikely to be.

‘Echoes of the Aftermath’ is far from perfect, but passes an hour or so with plenty of enthusiasm from the players and should appeal to those who like things huge, theatrical and defiantly Euro. Those unconvinced previously are still likely to be underwhelmed by the band’s general approach but, to be fair, the chorus on ‘Racing Heart’ alone is about a hundred times better than anything on their previous album. Even with a few duffers, this album is far more appealing than ‘Beth’, but it what it is – and it’s still not ELO, no matter how many times the record company tries telling you that’s what TmoMS sound like. By and large, it’s still big for the sake of big, making it an album that, despite best intentions and a handful of strong songs, is strictly for genre fans only.