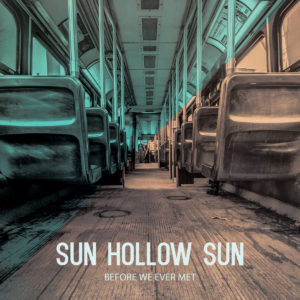 Sun Hollow Sun’s first release – 2013’s ‘No History’ EP – presented four enjoyable pieces of semi-acoustic roots music. With clean guitar work and easy harmonies, a touch of jazziness to the lead vocal and a set of well written songs, they not only set upon a timeless style but also showed they had the chops to take on more established acts. Three years on, the ‘Before We Ever Met’ doesn’t really meddle with that formula but, if anything, does an even smarter job.

From the very start of ‘Alphabet’, Sun Hollow Sun aim to grab the ears and hearts of Americana enthusiasts the world over. This tune, loaded with gentle reverb almost throughout, is a superb vehicle for Jennie Cini’s voice; it’s rich and slightly jazz-inflected as she cries after the absence of her significant other. The way the soft guitar meshes with a very warm upright bass and even softer drums sets a certain quality for the music in hand from the outset, but with the way the vocal raises for emotive emphasis approaching the last verse, everything comes together excellently. Musically, ‘Alphabet’ has a slightly fey heart but never seems weak, thanks to a vocal has the kind of presence that gradually draws in the listener. That’s a major plus, especially given the live in the studio sound offered throughout this opener. ‘Tears of Their Own’ follows in a smooth and thoughtful style. Trading in the live sound for more of a studio based polish, Tim McCarthy’s finger picked and circular acoustic guitar sits at the heart of the tune, the notes always busying and catching the ear. The accompanying vocal finds itself akin to a couple of Shawn Colvin’s more country outings and this alone would make it a great track, but the real star is Patrick Ryan, whose upright bass has a solid presence without being domineering. In all, this is a great tune, fusing country and folk with a hint of pop to make it really accessible. A Bob Dylan inspired harmonica solo briefly threatens everything with something slightly less melodic, but all things considered, it’s a very well rounded track. It could be considered the EP’s finest tune – especially since the Suns make the creation of these Americana infused sounds seem so effortless – but it’s up against stiff competition…

It’s when reaching ‘Keep You off My Mind’, however, when everything reaches the next tier and the Suns wheel out something truly amazing. This slower tune has a stronger focus on piano; solid chords strike against a soft drum with great effect, very much in a way that takes huge cues from The Band’s seminal ‘Music From Big Pink’. This, obviously, is a great thing indeed. More impressive than that, though, is the increased focus on vocal harmonies: Tim is promoted to lead vocals and his voice has a retro friendliness alone, but joining Jennie’s more forceful cry, the sound is that of two singers who really compliment each other. There’s nothing flashy here, just an easy groove that has a late 60s heart, leaving the EP with a track to return to time and again. To finish, ‘Nothing Like That’ dispenses with the full sound often favoured by The Suns and, instead, fills most of its time with a very understated guitar. Tim handles all lead vocals and his voice, while very natural, shows no sign of weakness as he presents himself in the role of troubadour. Definitely more folk than country, the quiet sounds take a few more plays to embed themselves and it might have worked better without the whistling, but overall, it’s a nice insight into a different side of the band’s musical interests.

With a love for Robbie Robertson and Rick Danko alongside a few more modern country-folk revivalists and a gift for penning friendly and familiar sounding material, Sun Hollow Sun are definitely a band to lend valuable ear time. This is highly recommended…and since it’s only short, it really whets the appetite for moving farther into similar musical territory. As a standalone listen it’s great, but try cueing it up for play alongside the ‘Royal Blue‘ EP by Lasers Lasers Birmingham and a bit of Lewis & Leigh to achieve that ultimate Americana hit… Aside from the length, it’s really hard to find fault with this release; when a brief whistling solo is about as close to a weak point as you’ll find, you know you’re onto a winner.