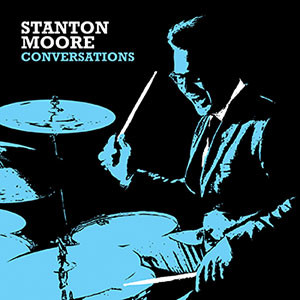 As the sleeve strongly suggests, ‘Conversations’ isn’t just any jazz disc, but one that takes its key influence from the past; particularly a few Blue Note recordings, resulting in arrangements that owe a great deal to that label’s highly prolific period between 1961-65. There are no weak links, but the first three numbers shows the musicianship off splendidly and are arguably the album’s best workouts. Singleton’s composition ‘Lauren Z’ starts with a punchy but melodic bass run, constantly shifting in time signature, before the piano and drums find space within the groove. Torkanowsky settles on a beautiful lilting melody throughout, his soft piano runs leaving a memorable tune, while the rhythm section busy themselves accordingly. The bass work never pales, tonally reminiscent of early sixties performances from Mingus, while Moore’s drums – although perhaps the least forthright – are assertive enough to make the listener remember this is always his recording. By the time he gets a brief solo at the close, he shows off the skills of a man who is almost a part of his own kit; his playing fluid, borrowing a melodic stance from Blakey, though always favouring a tom over Blakey’s trademark rimshots. Better still, ‘Carnival’ is a jubilant and uplifting number with a strong piano line, it’s sunny bounce alternating between deeper keys and a cheeky stabbing motif, the end result resembling the Vince Guaraldi Trio. Understandably, Singleton takes more of a backseat throughout this rather spirited six minute workout, but stepping up, Moore shows a great flair for hi-hat work. With a huge nod to the past, Herbie Hancock’s early composition ‘Driftin’ is then dusted down for a tasteful reworking; the sharp melodic style suiting Tarkonowsky’s fluid piano style, while the rhythm section take things at a leisurely pace. Tarkonowsky takes Hancock’s tune and treats it with utmost care, but the real star is Singleton, who channels Paul Chambers via some hard plucked, deep string bending during a rather understated solo. Hearing this proves, yet again, that in the hands of great players, Hancock’s classic – pre-fusion – works are the ultimate in jazzy coolness.

From that point, things show no signs of slacking off, with Moore’s ‘Tchefunkta’ stripped back to allow various brush techniques to shine on a quirky drum part. The piano stabs and shifts accordingly – sharp and striking during the formative bars, but while the main melodies are far removed from the accessible styles on ‘Driftin’ and ‘Carnival’, they never become obtuse; in fact, during the tune’s second half, given time to find it’s feet, the piano offers some great flourishes. It’s easy to focus your attentions on this, especially given how high in the mix it can be, but given that this is a tune – and indeed an album – to be played time and again without it losing impact, spare some time on those important subsequent listens for Moore’s performance. His abilities to shift between complex rhythms is absolutely astounding. This piece appears to become more complex as it moves along, but by contrast, the players become more at ease. Although a full band arrangement appears on Moore’s 1998 release ‘All Kooked Out!’ featuring Skerik on sax, this retro sounding reworking replacing that sax with piano is arguably far superior.

The laid back and very understated ‘Waltz For All Souls’ provides a pleasing contrast to the earlier numbers with a central piano working a mournful melody while Moore rumbles his toms with a quiet reverence, while ‘The Chase’ – far removed from the busy workout suggested by the title, features some superb rhythmic fills against a piano sound that shifts between the mellow, flowing style of an easy jazz and pointed riffing with a surprisingly fluid approach. It mightn’t be as immediate as, say, ‘Lauren Z’, but by the time the mid point is reached and everything does a sharp about turn into a busy bop territory and back again, this could be considered another highlight.

Elsewhere, ‘In The Keyhole’ is a bouncy offering showing the players’ easy dialogues somewhere between swing and bop, where a warm bass provides a great heart against a jubilant piano melody. Like ‘Tchefunkta’, given a loose and extended groove, each of the players comes into their own. ‘The Greaze’ is the ultimate in piano-led bop, recalling the brilliance of both Hancock and the McCoy Tyner Trio, while the minor key ‘Prayer’ echews more of the melodic stylings for a spawling dark affair, crawling along with a gentle menace. Like parts of Bobby Hutcherson’s ‘The Omen’, the latter isn’t always so comforting to listen to, but always feels as if it may offer the unexpected. Each of these pieces is markedly different, but each essential listening in order to get a feel for these sessions.

Throughout the album’s eleven pieces, the interplay within this trio cannot be faulted. Moore may have already played on some great funk and fusion releases, but ‘Conversations’ presents itself as a cut above. The stripped back arrangements are the perfect tribute to classic sixties sounds and the more timeless moods, resulting in arguably the finest jazz disc of 2014.