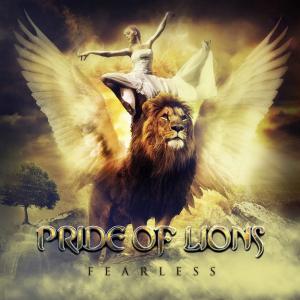 Peterik has found cult success as half of the driving force behind Pride of Lions since 2003, but received nothing like the same exposure he had with Survivor. Part of the problem is down to changing fashions; part of the problem is down to smaller label distribution. The big problem with Pride of Lions, however, is that they simply aren’t very good: their first four albums have been full of unimaginative, by numbers melodic rock – songs that aren’t a patch on Peterik’s previous best. Added to this, there’s the overbearing presence of Toby Hitchcock, a man with a voice like a foghorn belting out showtunes, hell bent on just blowing hard against any of Peterik’s musical endeavours. Hitchcock is a man to whom “less is more” means nothing.

Pride of Lions’ fifth album does not break previous formulae. Peterik spends approximately an hour going through the motions, peddling out safe and dated melodic rock, while Hitchcock bellows incessantly. Add a really bad, headache-inducing mix into the bargain and ‘Fearless’ is doomed from the very beginning. ‘All I See Is You’ sets the tone with a middling melodic rocker where a few stabbed piano chords are far and away the high point. It’s such a shame these are quickly buried by fudgy guitar chops and an intrusive violin sound borrowed from early Kansas. The chorus moves into a something with a slight country lilt; the band sound like their having a great time, but true to form, Hitchcock goes from loud to louder, bellowing like a wounded rhino tackling the works of a rock crooner. Moving farther ahead to the bridge section, Hitchcock ups the vocal stakes even more…and it hurts. It’s a relief when he finally shuts up long enough for Mike Aquino to offer a short but tuneful guitar break, to be honest. The last chorus brings the inevitable AOR key change…and with that – and the whole band dropping in bits of their craft in a kitchen sink arrangement – it’s incredibly overbearing, to say the least. A more mid paced affair, ‘The Tell’ kicks off with a promising chugging rhythm guitar, but it quickly becomes clear that the track’s not going to do much more. On a positive note, the way the solid mid-pace drives everything forward is totally Survivor-esque and the guitar fills are pleasing enough. A shame then, that this is strangled by a nasty vocal. ‘In Caracature’ follows and feels like even more of a Survivor-ish throwback but does a slightly better job. The staccato guitar parts are subtle (about the only thing on this album that is) and Peterik’s pompy keys are perfect for the job in hand. A big chorus aims to lift the mood farther and is well constructed – one of the few times that Peterik’s AOR pedigree seems obvious. Musically, it’s a step forward… Hitchcock, of course, smothers the band’s best efforts as if he’s centre stage and everything is all about him. When he takes Steve Perry influenced “whoah”s and recycles them in the manner of a showtune wielding numpty, it’s all too much like hard work.

The title track gives the Lions chance to tackle something with bigger balls and rock out, pushing Aquino to the fore. In priciple, this should be fine, as Aquino has more than reasonable chops and a nice lead guitar style. However, his best efforts are wasted once Hitchcock starts to sing. While the clichéd lyrics about fighting and toughness would normally pose a big problem, here, it’s not so much the fault of the lyrics in the track’s undoing, but rather more the messenger. In a way that’s (unintentionally) hysterical, Hitchcock attempts to sound like a brazen rocker, resulting in something that’s closer to Michael Ball with a megaphone. Much better suited to his style – and in many ways one of the only tracks here that is – ‘Everlasting Love’ sounds like a guitar-oriented attempt at something from an off-Broadway show. While the performance is technically fine, the sentiments, the overwrought voice and general sappiness of the piece are frankly vomit worthy. A great ballad can make or break an AOR album – Peterik should know – but since ‘Fearless’ was fairly broken to begin with, this could be the final straw.

The second half of the album brings (far too much) more of the same. ‘Freedom In The Night’ announces itself with some shamelessly retro keyboards – at first sounding as if they’re recycling a jingle from an 80s film company – before giving way to some classy piano lines and soaring guitars. Like a cross between Toto and Kansas, the band tackle this tale of “fight or flight” with gusto. A definite homage to Stallone soundtracks from years past and with a few grubby guitars on hand and a cracking solo to boot, it’s easily the album’s best track. Such a pity they couldn’t have kept it away from Hitchcock, or written some less cringe-worthy lyrics, but you can’t have it all…

From then on, the remainder of ‘Fearless’ is filled with patience testing workouts that – each in their own way – tarnish Peterik’s once flawless legacy. Of the most notable of these (not necessarily in a good way), ‘Light In Your Eyes’ is a big power ballad that so often comes across like a half arsed recreation of ‘Man Against The World’ (a huge track for Survivor back in the 80s); ‘Rising Up’ is a bombastic, shuffling hard rock mess that sounds as if the rhythm section and the lead players are playing different songs in places and ‘Faster Than a Prayer’ introduces some great soaring guitar leads only to then disappoint by allowing Hitchcock to muscle in, singing lyrics that sound like they’ve been written for a really saccharine cartoon movie. Oh dear: if ‘Everlasting Love’ didn’t make you feel queasy, this certainly will.

This is a hard listen. Of the dozen tracks, only two of them just about pass muster. Looking at the album as a whole, not only are the songs hugely uninspiring in the main, but the overly loud mix just hurts and Hitchcock’s musical persona is more tedious and overbearing than ever before. The only people who’ll be remotely interested in this are those with no imaginations; those stuck in a musical rut, wearing their rose-tinted Aviator shades, hankering for times gone by. AOR and melodic rock doesn’t have to be ground breaking – let’s face it, none of it has been for decades – but it has to be aurally inviting, at the very least. …And thanks to Toby Hitchcock and a hard of hearing engineer, most of this is anything but. The presence of a rock vocalist instead of a theatrical wannabe would certainly have helped matters but, sadly, most of ‘Fearless’ is horrid. Avoid.