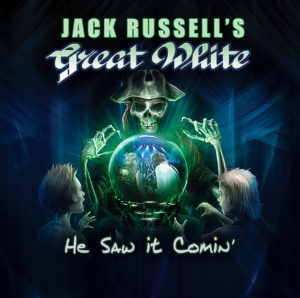 Due to Russell’s distinctive voice, you’d think the album would sound more like Great White than the “other” Great White’s long player – and occasionally this is true – but always keen to show off the range of talents within his band, for better or worse, Jack offers a more varied musical selection.

With a chunky guitar and dirty, funky riff, ‘Crazy’ is about as close to old school GW as things get, especially in the way Russell pushes his voice for the higher extremes – sounding almost as good as his younger self when doing so. The fusion of blues and glam is as appealing as ever; this is a tune that quickly pushes the right buttons, but the inclusion of organ and brassy sounds punctuating parts of the chorus takes it to the next level, while a thoughtful and equally bluesy guitar solo sends the track off with style. The slower, blues-edged ‘Love Don’t Live Here’ awakens the ghosts of ‘…Twice Shy’ era Great White, thanks to an understated rhythm guitar part, a selection of melodic rock harmonies and sweeping guitar solo. Sure, it’s bread and butter stuff for Jack as he works his way through the kind of performance that’s been the backbone of his career, but a couple of spins shows – tried and tested as this track may be – it’s one of this album’s definite highlights…something very much helped by a very infectious hook. Why it wasn’t chosen as the lead single is somewhat of a mystery…

Also in the “recommended listening” pile, ‘Spy Vs. Spy’ ushers in some busy guitar work that fuses hard rock and funk, while latching on to a great bassline. The bulk of the tune rattles along apace, with the band sounding as if they’re having a great time. Russell – although subjected to a few filters – puts in an equally energetic performance. The chorus is simple, but it’s very much one of those times where the overtly simple wins out and the hook becomes unexpectedly catchy. An instrumental mid-section turns everything on its head by ushering in slow and atmospheric sounds, before the chorus makes a last appearance. Jammering home the simple hook one last time, it’s a near guarantee that this is one of the tracks that’ll leave an indelible impression. The title track is somewhat unexpected, as a stabbed 70s piano acts as the backbone for something that sounds like a lolloping, theatrical workout. The use of multi-tracked vocals comes across as more Cheap Trick and Enuff Z’Nuff than classic Great White, while the overall cheeky bombast even hints at ‘Goes To Hell’ era Alice Cooper. With a solid bass attempting to fight its way through chiming guitars and a wall of vocals, there’s always plenty going on and it takes a few plays to really get the measure of how good it is. Once you get past its overbearing potential, it’s pretty smart.

Those four songs alone make ‘He Saw It Coming’ at least worth a few spins, but the rest of the material is a mixed bag that ranges from good (but not great) right through to poor. ‘Sign of the Times’ kicks off with a pleasingly crisp guitar sound, strings ringing with a retro charm, before plunging into meat and potatoes hard rock that sounds like 90s Great White. With the presence of a great hook and melodic solo, it should be an album highlight, but the production doesn’t quite punch in the way it should and a few filters on Russell’s voice are a distraction. Looking past the production choice, there’s a good song here, even if it’s not up there with the very best. ‘My Addiction’ pushes the bass to the fore and sets up some swaggering sounds, a little less bluesy than the preferred, but a combination of strong vocal and tough riff pass four or so minutes in a fairly entertaining way. Much like ‘Sign of the Times’, there’s often a feeling that it should be so much better, though…but unlike ‘Sign’, the flaws are from the opposite angle: in this case, there’s been far too much time spent on a big riff and solo, but not enough time on a catchy hook. The big ballad, ‘Anything For You’, meanwhile, really exposes the potential problems with Russell’s voice; without a chunky backdrop, he sounds nasal. Attempts at longer notes are filtered, while the music is horribly saccharine – very much a generic rock ballad, the kind that would have been included at the record company’s insistence had this been twenty five years previously. In short, neither Jack or any of his cohorts sound like they believe in the material…and a half-arsed, rudimentary plunking in place of a decent instrumental break only seems to confirm this feeling. The skip button is very much advised, but it’s still not the worst track on this long player.

Elsewhere, ‘Blame It On The Night’ is a melodic rock stomper that’s got more in common with ‘Last Temptation’ era Alice Cooper than anything in the Jack Russell canon; the chorus is fine, the playing solid, but it doesn’t brave anything you won’t have heard a thousand times before and ‘She Moves Me’ is an average affair that fuses rock and funk but all too often sounds like a forced attempt to move away from Russell’s past; it sounds okay the first time – thanks to a great bass – but beyond that, a slightly schmalzy quality and a one line chorus start to grate just a little.

Following a selection of tunes that range from the average, to the solid but ordinary, to genuinely great, Russell chooses to close this album with a genuine clunker. ‘Godspeed’ goes for retro…and not in the expected way. This number is heavily influenced by doo wop, The Four Seasons and Billy Joel’s own take on that sound. Sadly, Russell shows himself up in a spectacular way, choosing to use a world of vocal filters and multi-tracked voices rather than getting people on board who could perform such a style convincingly. The unnatural timbre to Russell’s own voice and various other tricks ensure this becomes hideously annoying in approximately a minute. It’s unfortunate that it’s the last thing you’ll hear – it’s certainly not the best lasting impression.

With ‘He Saw It Coming’, Russell sometimes shows why he’s become a much-loved stalwart of the melodic hard rock scene, but overall, it’s a record that’s merely okay when there should be so much more at stake. There’s nothing as immediate as ‘Call It What You Want’ or ‘Rock Me’, nothing as timelessly classy as ‘House of Broken Love’ (arguably the original Great White’s finest five minutes), but the hooky ‘Spy Vs. Spy’, ‘Crazy’ and ‘Love Don’t Live Here No More’ make it worth a few spins, even if it can’t quite muster enough greatness to be a truly worthwhile addition to Russell’s long musical legacy.