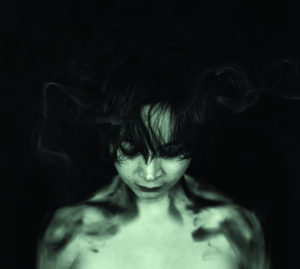 Fiona Brown is a singer-songwriter songwriter whom – by her own admission – absorbs many influences into her work. On her 2016 EP ‘Demons’, there’s a little rock and pop, nods to things of a more soulful nature and more besides, but never in a way that makes the release sound like a directionless show reel of her talents. She prefers instead not to separate the influences too much. You could experience any one of them at any time and often within just one track. but perhaps best of all, though, her songs are cloaked in a shroud of darkness. Never a “woe is me” self pity, but a genuinely dark quality that informs the heart of her best tunes.

Such darkness can be experienced throughout the title track, which opens with a droning sound, tinkling bells and with the feel of a heavy film score. You know instantly that Brown isn’t your run of the mill singer songwriter. The bottom end sound on the recording is devastating and the way her full-bodied voice quickly rises from beneath the dark ambient sounds is striking. In a matter of seconds, Brown hasn’t just made her entrance, but also made you stop in your tracks. “Don’t feel at all” she croons, almost as if to unsettle us, before asking “how do you face the demons?…Do you feed them with anger?”, taking us ever farther down the path of her questioning subconscious. By the time the second verse has crawled past with a melodic deepness and a downbeat mood that sounds like a Massive Attack remix of a cabaret number, it’s impossible to turn away. It needn’t do any more to be both a superb opener and instant classic, but Brown ushers in one last musical trick – in this case, an almost carny music element – to disorient even further. ‘Wisdom’ follows with a fuller sound, though doesn’t appear much lighter at first. A similarly dark approach is punctuated by mechanical beats, over which Brown’s voice takes the reins. This gives a great contrast, and there’s a terrific vocal performance; it’s one that has a very strong melodic bent without ever letting go of it’s unsettling edge. While the chorus isn’t one you’d necessary go away and hum to yourself, there’s very much a hook at the centre of this piece and it’s one that brings out the best in the vocal. Pretty soon, the penny drops…and for all of the fleeting influences at play thus far, there’s one that’s so obvious it’s almost hidden in plain sight. Let’s just say if you’ve ever had a passing for Dalbello – and particularly bits of her ‘WhoManFourSays’ LP – you’ll love this.

After a couple of pieces of moodiness, ‘Speak My Mind’ does an about turn, presenting Brown at the forefront of a retro tune that has an influence from the 50s, with a hefty guitar twang and steady beat. Although quite basic, the volume of the guitars and dirty production sound make the music thrilling, while Brown herself – not one to take a back seat – pushes her voice for a soulful trill. All things considered, this unashamed marriage of Gemma Ray, Billy Childish, Chris Isaak and more besides provides some solid entertainment. Although not as inventive as the earlier numbers, in a lot of ways, it provides the best entry point to the EP, since it has a tough hook and makes a great feature of a great voice throughout.

‘Used To Be Blind’ has a similar scope to most of Brown’s musical experiments, especially since deep beats are present and a few electronic treatments add spookiness, but the essence of the number is, again, more traditional fare. It also doesn’t feel any need to be too quirky or complex: a strummed guitar – seeming slightly off-key at the outset – dictates a waltzing tune, while Brown seems uncharacteristically calm. Throughout this tune, the song is far more important than any artiness and as such, the most melodic side of Brown’s voice comes to the fore once more. Delivered with more of a purity against sedate music, it shows the performer in a starker setting and it’s not a voice that’s easily comparable. If one were to be made – and as odd as it may sound – a hybrid of Annie Lennox and the maturer Lisa Dalbello would be a good starting point. However, given the presence and strength in the performance in hand, Brown is very much her own woman. From the anger of ‘Demons’ to the softer ‘Used To Be Blind’, this EP has already run an emotional gauntlet, but ‘Sweet Love’ closes everything with a new-age tempered, echoing ballad that occasionally hints at Jane Siberry’s quieter works. It’s a great way to finish, with Brown’s soft voice moving within reverbed guitar strums and other electronic treatments. It’s a world away from ‘Demons’ and yet is recognisable as coming from the same artist, such is the power in her voice.

This EP is not for everyone; there’s no attempt to strive for a mass acceptance. That’s why the world has Adele. There are songs, just as fine melodies cut through the artiness, but this is no lightweight singer-songwriter release. Brown creates music on her own terms, albeit haunted by the ghosts of a Dalbello past. Sometimes – as with the melodies that run through the excellent ‘Speak My Mind’ – she seems happier to let you in, but you’re still going to have to work for your reward, so you’d better be prepared to sit and really concentrate, to really take in all that she offers. Only then will the true magic of these demons be unleashed.