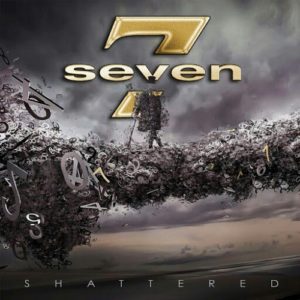 A twist of fate saw most of the original band reunite almost a quarter of a century later and even manage to release the long awaited album (‘7’, released on Escape Music in 2014), to the delight of many melodic rock buffs. Keen to capitalise on that, Escape wanted a follow up as soon as possible and ‘Shattered’ appeared in September 2016.

Various changes had occurred in the Seven camp over the previous couple of years and as a result, ‘Shattered’ features frontman Mick Devine from previous band line-ups and no-one else. While Seven in name only, the album’s dozen tracks are still first class melodic rock – and regardless of backing band, the vocalist is in great form throughout. ‘Light of 1000 Eyes’ paves the way for the rest of the album, unashamed in its old style melodic rock guise as an upbeat rhythm allows a great riff to come forth. Devine’s voice, with traces of Mitch Malloy and a huge influence from Lou Gramm shows all the class of before, delivering a pleasing performance throughout. ‘A Better Life’ goes straight for a tried and tested AOR melody but doesn’t suffer for its predictability. In fact, it ranks as one of the best AOR tracks of the previous few years, as is its connection with genre traditions and sense of purity. For the verses, the guitars are choppy, taking dominance over a blanket of keys for a slightly unsettled sound that relies on Devine to carry most of the melody, but a pre-chorus brings a big shift into something that is reminiscent of Shooting Star’s later days for a great improvement. The chorus is bigger still, and if Mick sounded a bit like Lou Gramm before, he’s almost a dead ringer in places here, something reinforced by the rest of the band clearly paying homage to ‘Inside Information’ era Foreigner. Great stuff.

The title track teases with a few AOR keyboards but quickly drops into a mid-paced staccato riff – the kind at the heart of three million and seven tracks in such a style – before guitarist Lars Chriss raises the volume and leads everyone into a harmonious chorus that’s three parts Boulevard and two parts FM. The studio filtered harmonies are pretty much faultless and the playing is solid, but song-wise, this falls a little short in direct comparison to the album’s opening pair. That said, Chriss’s featured solo is particularly fine: starting with a few tuneful sweeps and finishing with fast arpeggios, he manages to cover the important bases of a great solo in a very succinct time-frame. Another instant stand out, ‘I Needed Time’ is a tune heavy on the keyboards, laying down eighties riffs with a bell-like clarity. Those keys, prominent throughout, are joined by some excellent muted guitar riffs and a stately rhythm, most suited to many an AOR ballad…and particularly one with its heart still beating somewhere in the late 80s. Devine tackles each verse with a professionalism, never over-singing, his voice almost Richard Marx-esque; the rest of the band shines on an arrangement that wouldn’t have been out of place on either of Magnum’s big AOR records, ‘Wings of Heaven’ and ‘Goodnight LA’.

With an atmospheric keyboard intro, ‘Broken Dream’ moves towards a pop/AOR hybrid that utilises a simplistic chord progressions and the sound of very synthetic 80s instrumentation. As before, it’s often the voice that leaves the biggest impression, but a few of the keyboard arpeggios (far too low in the mix) also attempt to lift the mood. There’s more of a demo feel to this track if directly compared with some of Seven’s other works, but several plays shows it to be a well written tune that’s somewhere between the work of John Parr and Mr. Mister, very much a sidestep from a basic homage to late 80s AOR. A tune for the keyboard oriented and pop lovers, the guitars seem to be content with lurking in the back until the closing bars, when a melodic solo presents itself…only to be faded out once things get going. That wasn’t especially the best choice, but it doesn’t spoil anything that’s gone before; like Seven’s tribute to a Scotti Brothers Records soundtrack, had this been available in 1987 and not almost 2017, Sylvester Stallone might have called upon their talents.

‘Fight’ attempts to rock things up a little, but the harder edge isn’t Seven’s best suit. The track is hampered farther by a slightly embarrassing macho hook, but in turn is almost saved by a prog-pomp instrumental break where Fredrik Burgh’s keyboards appear reinterpret the sound of Tony Banks circa 1986. In fact, in a way that totally flaunts this, Chriss drops in a guitar riff that completely rips Genesis’ ‘Land of Confusion’! There are flickers of interest, but this track is second division fare for Seven, while ‘World of Make Believe’ mixes guitar and keyboard motifs in a perfect way that recalls so many great AOR tunes during its intro, before entertaining with a meaty verse where the bassline pumps a melodic rock heartbeat and a chorus comes across like a hybrid of Foreigner and Revolution Road. Even with the increase in vocal harmonies, the keys never subside and the featured guitar solo pushes all the right buttons. The album’s only real skipper, ‘Last Illusion’ blends a heavier riff with a misjudged keyboard sound on a forgettable tune. Even with a pre-chorus that has more hints of Magnum – there’s nothing too exciting here and a ridiculously ugly keyboard solo kills everything stone dead. Seven don’t often get it wrong, but judging by this, when they do, they fail in spectacular fashion. Elsewhere, ‘Pieces of You’, ‘Taking Over’ and ‘Live This Life’ flesh out the album with more familiar melodic rock sounds, ensuring that most of ‘Shattered’s near-hour playing time is often time well spent – and hitting the repeat button on ‘Pieces of You’ might just help dull the memories of ‘Last Illusion’…

This album might be a hugely predictable, AOR by numbers affair. It’s certainly thirty years out of date at the time of release. …And a real drummer would have been nice…but those potential drawbacks never detract from the fact that most of the songs are great. And its through the old-school authenticity and enthusiasm of those, ‘Shattered’ manages to be a thousand times better than most melodic rock albums released in 2016. If you like the idea of a timely trip back to the big hair and big chorus days of the late 80s, you could do far worse than spend time with this disc.