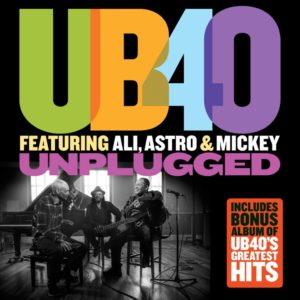 Having lost two of their four most distinctive elements, not to mention their two most recognisable singers, you’d have to question why Robin and company have persisted with UB40. That said, on the basis of these sixteen stripped back and semi-acoustic reworkings of UB40 hits and covers, most of the time, you’d have to question why Ali, Astro & Mickey are bothering either.

At it’s worst, ‘Unplugged’ sounds like a collection of tunes featuring Ali Campbell singing over a working demo track of programmed drums and stabbed keyboard parts – tunes of a skeletal framework awaiting a talented band to fill in the gaps. ‘It’s Supposed To Hurt’ represents a bad example of this, as basic stabbed keys its the strongest link with anything reggae. Occasional bass comes through bu,t even with best intentions, this track sounds like four minutes worth of pre-programmed laziness. Always a track with a strong melody, ‘Please Don’t Make Me Cry’ is genuinely minimalist; shorn of Earl Falconer’s bass – the element that really carried the UB40 version from ’83 – it’s now down to Campbell to step up to the plate and make things work. Luckily he’s in good voice and the brilliance of the old track just about comes through, but it’ll never replace that ’83 cut in your affections. The harmonies throughout the version of ‘Cherry Oh Baby’ are flawless and there’s a feeling that everyone had fun during the recording sessions, but the lightweight arrangement and spacious feel make it more appropriate for an advertising jingle for a tropical fizzy drink than a reggae LP. Like ‘Please Don’t Make Me Cry’, it’s okay for what it is, but hard to get genuinely excited by the result.

The Casiotone feel reaches its zenith during ‘Kingston Town’ with Mickey stabbing rudimentary chords over a bass drum and congas. The wind instruments are replaced by acoustic guitar twiddles and even these are subject to bum notes. Aside from an effortless vocal, there’s just nothing here. Nothing. Pato Banton guests on ‘Baby Come Back’ as before and adds a new toasting intro, but beyond that he sounds like he’s phoning it in and just hoping for a royalty cheque. The music, meanwhile, is presented a little slower and in doing so, it sucks all of the fun from a once great song, whether in the hands of the Campbell brothers with Banton or Eddy Grant’s Equals. ‘I Can’t Help Falling In You’ is better suited to the stripped down style and actually manages to cling on to some light reggae throughout. Ali’s voice is almost indistinguishable from his younger self, but it still doesn’t represent what UB40 did best when at the top of their game. It might pass muster, but once Ali stops singing the Casiotone elements are just too obvious. A couple of listens and any novelty attached to reworking the tune in a lounge style truly wears thin.

The 1985 number one hit ‘I Got You Babe’ (with the ever-cool Chrissie Hynde) is one of those examples of a cover that’s better than the original. On this collection, Hynde’s place is taken by Campbell’s daughter Kaya – which is a bit creepy if you over-think it. She has a strong voice and this is a good showcase for her as she pushes everything towards more of a soulful R&B than Hynde ever could, or even want to. Beyond that, though, it falls flat. The musical backdrop sounds like it’s been appropriated from a reggae karaoke disc and, as such, means you’re unlikely to want to listen to this more than once for curiosity. UB40’s rendition of ‘Red Red Wine’ is now arguably the world’s best known, to the point where writer Neil Diamond has paid tribute at his own live shows. Rightly or wrongly, it’s become one of their signature pieces. Time could be spent debating whether that’s fair when fantastic tunes like ‘As Always You Were Wrong Again’, ‘Come Out & Play’ and ‘Sardonicus’ seem destined to go unheard by so many, but the ‘Labour of Love’ rendition represents artistic magnificence compared to its limp unplugged counterpart. A flimsy calypso-ish run through has nothing of interest beyond the vocalists present…and even then, Astro’s toasting has none of its former bite.

…And Jesus F. Christ, what possessed them to think that hashing out a lazy, reggae influenced lounge act version of ‘Purple Rain’ was a good idea?! In doing so, one of the great 80s classics is subjected to cod-reggae awfulness. Mickey plonks at his keyboard as if on autopilot while a nastily thin reggae beat takes hold. The vocals have no room to stretch out, and so Campbell delivers each word with a general lack of effort. By the time everyone reaches the first chorus, it’s clear to all but those with a lack of taste that this might have been one of the worst ideas ever. The only bright spark comes from a trombone solo: it’s good to finally hear an instrument with some clout, so it’s twice as gutting to hear it so utterly wasted on this travesty.

‘Homely Girl’ – a Honeyboy number that appears in a superior version on UB40’s 1989 LP ‘Labour of Love II’ – kicks off with a rumble of percussion that suggests something interesting might happen – but it doesn’t. Within seconds, a programmed drum and simple chord progression becomes the dominant force; it sounds unfinished, uninspiring and…ultimately unnecessary. The vocals can’t really be faulted, but there’s a general feeling that, unless all copies of ‘Labour of Love II’ are destroyed by fire, listening to this is a waste of time. An improvement, ‘Many Rivers To Cross’ is one of those tracks that has a real heart whichever version you favour – be it Jimmy Cliff, Joe Cocker, UB40 or even Cher – and here too, Ali does his best to get across that ache that comes within the vocal melody. Musically, it’s a bit thin and the bass drum is intrusive, but the organ retains a soft and pleasant atmosphere and occasional acoustic guitars are more than sympathetic. After years of hearing it reach for the skies with a gospel choir, it’s all a bit anti-climactic, of course, despite best intentions.

Better than most of the album, ‘Rat In Mi Kitchen’ comes across with enthusiasm, though that has everything to do with Astro’s typically ebullient performance. It’s nice to hear his now older voice hitting a couple of smoother notes at the end of a few lines and he performs with utter professionalism throughout. The basic elements of the original tune – aside from the bass – are intact: the stabbing rhythm has a mood lifting intent and Mickey’s piano is high in the mix. As the tune rattles along apace, it’s clear that the band know that this one works. The politically charged ‘Tyler‘ is a bold choice for reinvention, but also an important one, as the quieter music allows the heavy lyrical message to be heard with a little more clarity than before. The slow pace has more of spirit of the band’s beginnings and presents a welcome foray into some actual reggae. Naturally, it doesn’t quite have the gravitas of the original and the woodwind parts sound like a bloody kazoo, but firmly against the odds, that doesn’t spoil a stab at something sacred.

An underrated track first time around, ‘You Could Meet Somebody’ might come across as light acoustic fare, but it sounds like it could’ve been the instigator for this whole project. The harmonies are tight and the bouncing rhythm represents one of the times where the feel of the original version isn’t lost. A touch of reggae, a little calypso and a solid arrangement show why this album should be a thousand times better than it regrettably is, while ‘One In Ten’ shows how you just can’t keep a great song down. Even when unplugged, it’s rhythmically hard, retaining plenty of bounce; the chorus is brimming with harmonies – all of which invoke good memories of the original cut. Tackling his lead, Ali comes across very naturally and even with nothing to disguise his now much older voice, he sounds great. Of the greatest interest is how nylon guitar strings add the melody of the original sax part. In all, it’s testament to how great a song this is…and always will be. Likewise, ‘Food For Thought’ uses the similarly crisp guitar to replace the sax to good effect. The solid arrangement is instantly recognisable, albeit quieter, and Mickey’s move to piano-based sounds is a definite improvement. With glimmers of hope, it’s a shame there couldn’t have been more of this calibre.

Those who decided that UB40’s career was all lightweight rubbish to begin with (despite many, many barbed lyrical concerns) will have a field day with this. To be fair, it will probably test the patience of all but the most the most unapologetic fan. Some things work in the unplugged style. Reggae does not, no matter how it’s played. This almost bass free collection dominated by Casiotone flops is testament to that. Ali is in good voice throughout, but he’s never ever challenged to be his best; Astro is all too often absent and Mickey’s keyboard playing never stretches much beyond basic chordal plonking. How far the mighty have fallen – three great tracks and a couple of okay ones just isn’t enough to rescue this otherwise sorry collection.

[Unplugged comes with a bonus disc featuring twenty of UB40’s greatest hits.  These are the original versions.]