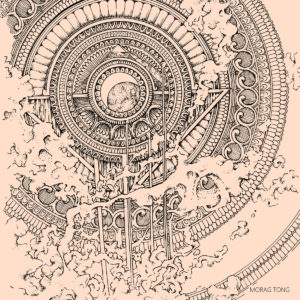 It’s one of those releases that really starts as it means to go on, as the aptly titled ‘Monolith’ opens with a reverbed feedback drone which leads into an oppressively slow chord progression, which itself then unfolds particularly slowly. The effect of hearing the riff for the first time is like hearing a lo-fi Electric Wizard b-side, with the recording budget then making the band sound even more other worldly thanks to a heavy but hollow sounding drum. The vocals make their appearance at the midpoint – this being a surprisingly succinct three minute affair – and they, too, are blessed with a far away, echoing sound that just helps give Morag Tong just enough of a stand-offish edginess. Moving into ‘Godhead’, things get even better, as guitarists Alex Clarke and Lewis Crane crank an overdriven noise before settling on a wonderfully hefty riff that sounds like the louder bastard son of Goatsnake. Over this, naturally, drumming vocalist Adam Asquith’s vocals aren’t always the most tuneful but he chews through each line with a dark intent. Weighted down by some great bottom end bass work, this is terrific stuff and even with an unwavering, almost unchanging riff at their disposal, the groove never gets tiresome. At almost four minutes in, though, it’s all change as Morag Tong briefly unveil a quieter psych-doom element, with jazzier, cleaner guitar work and occasional bass noises, much like a trippy Black Sabbath workout. This is great, but also too brief: by the time you get into it, the mammoth riff returns and its crushing nature becomes everything until the track’s end.

The EP’s second half takes the Morag blueprint and extends it over a couple of pleasingly longer workouts. First up – and a contender for best track – the title cut revisits the darker psych element of the previous track to some extent, with a quiet intro that works a steady drum beat against Sam Lewis’s excellent lead bass. The all round moodiness comes across like Joy Division channelling a doom band, especially in the way Adam’s vocals crawl and mumble across the spacious musical backdrop. The vocals should be the dominant force, but it’s the bass that’s of most interest, chiming out minor sounds with a major presence. Obviously, this isn’t going to sustain a full track and eventually a massive riff destroys all melodies. Topping that with a quasi-melodic bluesy solo, Morag Tong lay their purest musical intents down for all to hear, sounding like a truck in the process – or maybe three bands playing tunes by Australia’s Skullcave simultaneously. Just when you think it couldn’t possibly improve, Sam steps up to the plate for a bass solo with a genuinely impressive sound before everyone drops back into maximum sludge (coupled with another bluesy lead) to finish. In terms of sludge metal, you’ve rarely heard better. To finish, ‘The Eyes of Men’ increases the distortion and volume to the point where you might think your speakers have broken. Riff wise, it revisits the more solid sounds of ‘Godhead’ but the sludge, while brilliant, can also be overbearing. The mix makes Adam’s voice sound like it’s coming from another room and, all things considered, the results are absolutely unrelenting. Luckily there’s a top notch solo along the way with the guitarists dropping into melodies that borrow from Tony Iommi and Josh Homme, adding another high point to an already excellent EP. The second half of the track, however, makes a play for pure sludge, with the four musicians hammering out the same riff for what feels like forever… It sounds great with the volume cranked, but if you like things to be more melodic or more varied, there’s every chance you might not make it all the way through. There’s no denying, though, that – in sludge terms – it’s a great climax.

This debut EP has a bit of everything you’d want from a classy sludge release. Riffs a mile wide, a bucketload of reverb and a dragging sound that makes everything sound like it’s emerging from three hirsute blokes in a cave of electricity. There are slower, heavier releases and bands out there, of course, but in terms of crossing those doom and sludge borders but still creating something you’d actually want to spend that quality listening time, Morag Tong come out as true champions. If you love it slow and heavy, then ‘Through Clouded Time’ is gold standard metal.