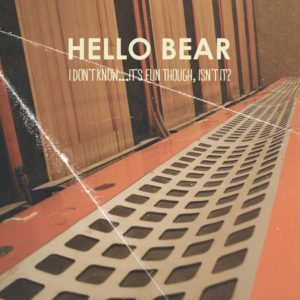 Released as a video ahead of the EP, lead track ‘We Held Hands Once, But Then She Got Embarrassed’ gives a great insight into where Hello Bear are at musically. A semi-acoustic intro gives the impression that the tune will morph into one of those twee, gleeful ukulele affairs, but then the band crashes in with a great sounding bouncy riff that sits somewhere between pop-punk and power pop. Unsurprisingly, the arrangement owes a lot to Fountains of Wayne and at the time of recording, the band members are still the right age to have not given up on Weezer…and it shows. Lyrically, the combination of a relationship status and a world of confectionery is mildly diverting (it’s possibly the only song to ever use the phrase “licorice whip”), but somehow it works out fine. Combining everything with a harmonious and optimistic chorus hook, though, it shows this quartet have all the right ingredients to infect the listener with a giant earworm. Further listening even brings out a slightly more sophisticated edge…and there’s a good chance that someone in this band also likes Barenaked Ladies. It’s a great start and not a five minute wonder, either, since the other tracks, in all honesty, are every bit as good as this.

‘Mmm, Cheque Please’ works a staccato riff and heavy bass drum from the outset, before adding deep toms to give everything a solid backbone. Once more, the marriage of pop-punk riffery is tempered by a sugary hook that, this time around, sounds like a cousin to the much-missed Click Five. Throughout this track, frontman Luke Fox’s vocals cry with a pop cool, which sounds at it’s finest when joined by a world of jangling guitars. This really shows Hello Bear to be masters of their quirky power pop menagerie and – as per the band’s wishes – should be a near-instant mood lifter; just enough musical honey to remind everyone that the world isn’t all bad attitudes and negative vibes. Taking a step down, ‘Dirty Weekend’ utilises an understated bass and a steady rhythm that informs a verse that sounds like a weird hybrid of early Joe Jackson and The Killers, its steady riff peppered with lead guitar flourishes as the tune progresses. Again, everything is linked by a quirky vocal melody and the number eventually reaches peak in style, with a cranking of the guitars and a pop chorus where we’re encouraged to “dance like our feet are already dead”. Chuck in a few harmonies, a few random “woo-woo”s for extra joy and it’s a bit of a kitchen sink affair, but it has a little of everything power pop needs to please.

Seeming like a side step at first, ‘Attack Hug’ has a twee melody and whistling – and sounds like something used for UK advertising. That could be an irritant but, luckily after a bar or three, the band explodes into some high energy jangling. What follows is a feel-good tune that sounds like Vampire Weekend on a pop-punk bender, with multi-tracked guitar lines. Of course, the chorus is another belter, with more woo-woos than you could shake a sugar cane at. Infectious is the word…and if you’ve got a sweet ear for these kind of pop-rock shenanigans, you’ll love this.

These four tracks are quirky and fun, almost to the point of annoyance in places…and there’s a feeling the band know it. Love ’em or hate ’em, though, there’s no denying that in power pop terms, Hello Bear come out winning with huge cheesy grins every time. For fans of Fountains of Wayne, especially, these guys could just represent the underground hit of the year.