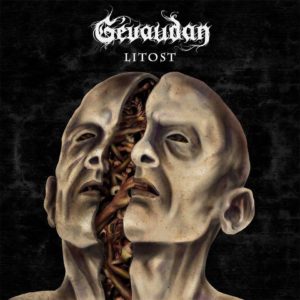 With bands like Kurokuma and Allfather making some very heavy waves, the underground doom scene in the UK found itself in a very healthy state moving into the close of 2016, perhaps more properous than it had been in a long while. There seemed to be new doom and sludge bands oozing through the woodwork on a weekly basis, but since the fashion for slow and heavy never gets old, the ever expanding scene had more than enough room to accommodate…and, this, obviously could only be a good thing.

At the more extreme end of the doom and sludge scale, there are some bands whom prefer to drag out sludgy riffs for what feels like an eternity, but that’s not really the Gévaudan way. This Hertfordshire band do like an extended arrangement, it’s true enough – their second release ‘Litost’ clocks up at half an hour for just the three songs – but they aren’t always so enamoured with sludge for sludge’s sake. This release centres itself around a more traditional Sabbathy sound and – at least riff wise – is all the better for that.

‘Wastes Eternal’ wastes very little time in putting forth some of Gévaudan’s best traits. Following a touch of feedback, a dirty riff cranks the same haunting tune repeatedly against a backdrop featuring an atmospheric gong. Against the slow riff, the usage of gong adds an ominous edge and as the riff plays over, there’s a feeling this is going to be big. Then the vocal appears: an off-key croon, it is neither what most will expect, nor what some will want. Adam Pirmohamed has what can only be described as a love it/hate it kind of voice and even when he lifts his tones to a higher register, his slightly wailing style hampers the potentially great music. Of course, Ozzy was never much of a singer – even in the early Sabs days – but, even so, there’s a feeling that the choice of voice here might be this release’s general undoing. Attempting to look past that and concentrate more on the slow groove set up by guitarist Bruce Hamilton, it’s a great riff, very traditional 70s metal fare; more akin to ‘Sabbath Bloody Sabbath’ than the boomier and doomier parts of the ‘Paranoid’ LP. The most impressive moments come at around the three minute mark when he replicates Tony Iommi’s earliest vibrato sounds perfectly, thus lending Gévaudan’s general approach a kind of ominous uncertainty and an almost gothic horror element. Moving into the second verse, with the still great riff bolstered by some great drumming, things seem to settle down a touch more. Adam’s voice has an odd timbre but, given time to adjust, it’s clear he also has a sense of presence and the way he uses a downbeat lyric to weave a tale of unease is perfect. By the time he abandons any kind of singing for a theatrical spoken word passage and Bruce tears into a solo, this track reaches its peak; and by now – even with some unsure elements – there’s no denying Gévaudan have a genuine vision of how they want their brand of narrative-driven metal to be received. Despite this being just shy of ten minutes, there’s no sense of the arrangement having been padded, or that riff ever becoming dull. Bowing out with a reverbed guitar sound and a jazzier tone, the sounds drift off into the ether…and Gévaudan set about their next epic.

‘The Ninth Circle’ opts for more of a horror theme right from the off, with slightly discordant guitar sounds and a spoken word performance that comes across like a hammy actor trying to impress. He speaks of “a lecherous tribute to [his] own collective personalities”, suggesting the next several minutes might take several twists. Moving from the spoken to the sung, things crook themselves into the even uglier. Surely Adam knows what he’s aiming for vocally, but what transpires is a challenging off-key wail. Maybe that was the intention. Maybe that’s how he likes to do things. It’s never easy to listen to, sadly, especially when placed against a slow, thumping rhythm and very little in the way of a barrier. After several minutes, the slow and waltzing beats become a touch unnerving, but if you can stick with this track it’s worth it, especially since there’s a brilliant, heavily fuzzed riff coming and a great solo. This use of guitar effects accentuates the lost, desert vibe of the bulk of the music and for a moment, ‘The Ninth Circle’ almost makes sense. More spoken passages suggest the protagonist’s ever-cracked emotional state as the track descends even farther into a dark, fantastical world. It’s been a long haul to get to this point. Some of it has been a slog – time you’ll never get back – but luckily, the aforementioned guitar solo that rises from the twisted sounds provides the highlight, as Bruce works some aggressive notes, bending his strings and tempering them with wah-wah accordingly. One more sung verse and a focus on an Orange Goblin-ish riff provides just enough entertainment before everything comes to a necessary end. While arguably Gévaudan’s most adventurous offering, this is also their most difficult. Those who like it could well love it, but for most, it’ll be a challenge, to say the least.

Almost making up for that – but never quite reaching the heights of the opener – ‘Lord of Decay’ shows the full spectrum of this band’s musical traits. The vocals range from the deep and sinister to a clean, high tenor wail and those styles don’t always blend, but the music – the music, for that’s what’s most important – is terrific. Within some nine minutes of Goatsnake themed heaviness, the band so often use their grandiosity to their advantage, with the guitars churning out mid-paced doom riffs and heavy bluesy solos that very much add a welcome melodic edge. Beneath those dominant guitars, bassist Andy Salt can be heard weaving interest, before he, too, gets time in the spotlight when Gévaudan discard their heavier tendencies in favour of some ‘Planet Caravan’ influenced trippiness. It may be brief, but the psychedelic wanderings really help to make ‘Litost’ retain a wider reach. This track closes unexpectedly with the heaviest riff of all and the vocal rises to an unrestrained sound that fuses hardcore shouting with a slight black metal growl. Is this really the same band whom gave us fuzzy psych just a few bars before and indulged in enormous theatrics earlier still? There’s absolutely no curtailing Gévaudan’s sense of scope.

Even flawed releases can turn up some gold – and that’s very much the case here. Throughout these tracks, the riffs are always worth hearing; the general bombast is spot on and the production values are impressive too. Without labouring a point too much, those vocals are going to be troublesome, but they’re certainly distinctive. If you love a Sabbathy riff and ever wondered how such riffs would sound if attached to an unhinged, progressive concept about internal emotional turmoil, then this could be for you. Just be prepared to work at finding those best bits for your own listening fascination, for Gévaudan aren’t about to give you an easy ride.