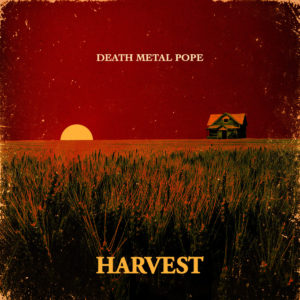 Despite their chosen name, Death Metal Pope aren’t a death metal band. Some of their vocal choices are towards the extreme in places and there are occasions where the riffs step into the fast and intense sphere of extreme metal but, for the bulk of their material, these three Long Islanders love it slow and heavy. At least three quarter’s of 2016’s ‘Harvest’ is a stoner metal fan’s dream.  They mightn’t score many points for originality, especially since the clean end of the vocal more than resembles Phil Anselmo in places and the music is very Down-centric, but, make no mistake, the results come close to stoner perfection.

The band’s talents and intents take a fast hold during the title track, an opening statement that flaunts the Pepper Keenan love via a mid-paced riff, cranking out a tune that’s heavy but bluesy and always appealing. The clean vocals that take up the bulk of the track are a perfect fit; the marriage of impassioned voice and fuzzy guitars recalls COC, Down and Sabbath with a boundless love. Before that greatness takes a hold though, listeners will be subjected to DMP’s own twist on the genre, by way of an intense and almost impenetrable growl, which fleetingly places the band’s musical intent closer to the UK’s Kurokuma than any of their US heroes. For those a bit more tolerant of an extreme voice this, too, can be good…presenting a band who are able to push boundaries without too much alienation. Behind the riffs, the drums hit hard with constantly flailing cymbals – recalling ‘Wretch’ era Kyuss – and all things considered, this three piece arrive with all guns blazing and sound like true professionals from the off. It’s not all about the purely heavy, either: for those looking for something a bit quieter, the instrumental break dispenses with the heavy distorted parts and focuses on a lengthy bluesy guitar solo, resulting in music that’s like a cross between Butchers of Sky Valley and one of Down’s trippy interludes. All things considered, ‘Harvest’ is the perfect opener.

‘From The Dust Returned’ kicks off with a particularly thrilling intro as scratchy guitar sounds, occasional twin leads, reverb and echo suggest a voyage into something otherworldly. Underpinned by heavy drums and grumbling bass, it’s the kind of thing that could go on for a good while without become boring, but soon enough – sooner than expected, actually – the main riff appears with a heavy presence owing almost everything to Down. Churning out a slow, head nodder of a riff, the three musicians never waver, while a tough but melodic voice steers everything towards stoner glories. There’s a brief interlude where things get a bit looser, but for the most part, the riff is king. At the point where the track reaches a natural end, everyone steps up to deliver a fast Sabbathy homage – again, with a near-perfect execution. This increasing of speed is somewhat unexpected, but very welcome…and best heard with the volume cranked.

Having made sure listeners are more than aware that Death Metal Pope are a stoner band par excellence, a two pronged number shows a different side. ‘Miserable Existence’ thrashes forth at high speed with an odd blend of stoner guitar and melodic thrash intensity, topped by a melodic death growl. It gives everyone a real work out – especially in the case of the drums and shredding guitar solo – before ‘Unrest’ slunks back into the more comfortable realms of stoner, with a great vocal to match. Finally – this release is far, far too short! – ‘Young Graves’ chugs menacingly in a Sabbath meets Electric Wizard styled homage, as dirty rhythms are topped by crying leads before a dark descent into the EP’s slowest riff. Atop the crawling heaviness, a multi-tracked vocal is confident – though very much another Down lift – while the guitars hold firm throughout. Stylistically, you know very much what to expect from this, but it doesn’t make it any less great, especially once the slower sounds are augmented by twin lead guitars and a simple bluesy lead. Bowing out with a brief, sludgy riff and a short drone, Death Metal Pope surely know they’ve left everyone wanting more.

A few of the vocals may be hard going, but these four tracks present absolutely blinding riffs – some of the best of 2016. ‘Harvest’ is the perfect release to blast those eardrums, work those speakers and to completely immerse yourself. For those who by now can’t bring themselves to be associated with Phil “Nazi Salute” Anselmo and Down, the Pope brings some much needed and timely salvation. Highly recommended.