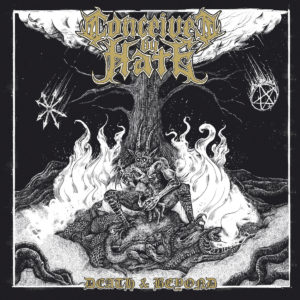 From the outset, it’s clear these guys can really play. Not only that, but they can knock out riffs and solos at breakneck pace, never missing a beat, never faltering, rarely slowing down. The most forceful thrash is what they crave – and if you still hanker after the more melodic end of Carcass and the earliest Sepultura, ‘Death & Beyond’ is almost guaranteed to thrill for, as the title suggests, musically, CBH take us to death and beyond. ‘Crossroad of Fire’ presents a full throttle thrash riff that at first showcases unaccompanied guitars ushering in the tune, before drummer V.K. punctuates with a heavy beat. Shifting into the verse, the music takes on a tough mantle, borrowing from early Sepultura and Kreator, leaving behind a familiar style. Once vocalist/guitarist M.Q. opens his mouth, however, it’s going to be a make or break moment for many. He took over vocal duties in 2013 and contrasts the perfect music with an ugly growl that sounds like a cross between a melodic death growler and Cronos from Venom. He also sounds as if he’s in a different room. Overall, this isn’t ideal, but luckily the music continues to impress, with yet more taut riffs and a faultless solo bringing maximum shred factor. ‘This Is Underground’ continues at a similar speed, but ushers in a few more double bass drum pedals and is presented with a slightly more hollow mix. That mix is more in tune with the voice, but there’s still a nagging feeling that CBE would very much benefit from a better vessel to deliver their lyrics. Another fine solo provides a high point, before a second – in a completely different style – improves things further, with the players recalling the contrasts between Slayer’s Jeff Hanneman (always missed, never forgotten) and Kerry King. This needs to be played very loudly for best results. Despite the jarring vocal, if you’ve been impressed thus far, the rest of ‘Death & Beyond’ is fantastic metal fare.

‘Chaos Upon Us’ might sound like the kind of track title that would be home to more of CBH’s full scale thrash, but they take a rare opportunity to slow down a couple of notches. None of the heaviness is lost, nor the smartness in the playing. On this chugging affair, the guitars are very much at the forefront with M.Q. and R.V. (also of Conflicto) cranking out a deep riff that hints more at Lamb of God than Death or Annihilator. It’s not always as straight forward as first appears either, as following the first section, the band launch into a progressive death arrangement that adds something off-kilter thus challenging V.K. in terms of his rhythmic timing. It’s all incredibly impressive stuff, before everyone reverts to type and fills the middle of the number with high octane riffs. When all feels as if it’s coming to an end, a swaggering riff creeps in unexpectedly, before yet another riff introduces itself under severe pneumatics and a melodic lead break brings everything to a sharp close. There are probably ideas for three separate songs wedged into these five and a half minutes, but brimming with self belief, CBE manage to keep things interesting throughout.

‘The Underground’ plays closer to standard thrash, but tempers the pneumatics with some superb twin leads – a terrific tone shows players with a real ear for melody; ‘Worship The Old Ways’ thrashes relentlessly adding more of a melodic death slant to the band’s sound but always keeps the technical end up with some great melodic counterpoints and ‘Summoning The Graves’ – at least musically – sounds like ‘Schizophrenia’ era Sepultura fighting towards something a touch more mainstream…or at least it would if M.Q. wasn’t growling so much. While each are tracks that recycle the core elements of the CBH sound, in thrash terms, the speed and tightness with which these numbers are put across cannot be faulted. The lead guitar breaks during the latter especially present one of the album’s highlights. Elsewhere, ‘We Choose Who Suffers’ is a great demonstration of V.K.’s drumming talents whilst also showing the band at their heaviest via a grinding riff – enjoyable but not reaching the band’s full potential – while the title cut blends classic thrash with melodic black metal for reasonable results. By this time, the vocals haven’t become any more tuneful, but somehow make more sense…if that makes sense. Like ‘Summoning The Graves’, this number rises from reasonable entertainment to great thanks to a couple of cracking solos. The second featured lead break is particularly notable as, although short, it’s home to some impressive fretboard manipulation, as it pays homage to Jeff Hanneman’s squealing and mangled approach. In balance with this, the third solo – you can never have too many – is pure melody, chock full of soaring, metallic notes inspired by classic mid-80s sounds.

For those looking for something a little different, ‘Below The Pale Sky’ surprises by way of a neo-gothic intro, teasing with cleaner toned guitars and keyboards that weave a great melody. The keyboards don’t just disappear once the heavy riff crushes through either. About a mile beneath the guitars, ex-Scavenger keysman T.M. continues with the neo-gothic melody and eventually expands upon it, lending the track the kind of melody that might typify a string part on a number by My Dying Bride. On this track, too, the vocals reach their greatest appeal, with M.Q. tapping into a near perfect black metal growl that’s in complete sympathy with the gothic black metal backdrop. This track really sticks out – it isn’t necessarily better, just different; different enough, in fact, to not always sound like traditional Conceived By Hate. Whether this is a good or bad thing will be a matter of personal taste.

The music on this disc resembles some of the best thrash you’ll ever hear. It isn’t always the most varied album; CBH value speed over atmosphere, but always achieve their musical goals with aplomb. On the flipside, the lyrics are mostly inaudible, the vocals badly mixed and all too often never rise above growling hardcore metal noises. That style of vocal almost throughout means this release won’t necessarily connect with a wide audience, which is a travesty given that the music is so amazing… Hopefully, there will be people open minded enough to enjoy this for what it is, though – as a death/thrash crossover disc, ‘Death & Beyond’ is a mighty, mighty statement indeed.