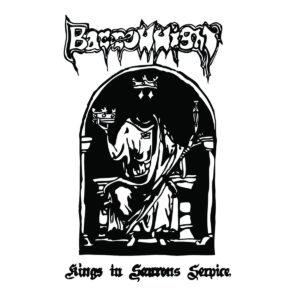 On their debut album, the Canadian trio churn out lyrics based around Middle Earth and set the stories around riffs that are fairly obviously derived from the early works of Venom. They often have the empty production values to match. The album’s best track ‘No Sleep Till Gondor’ (yes, really) comes at the start of the album (following an intro) and delivers a reasonable chuggy, slow thrash riff. While this is arguably the best Barrow Wight can manage, the show is over once bassist/vocalist Antero starts to sing. His voice comes across like a mix of the young Tom Araya on the badly mixed Slayer album ‘Hell Awaits’ and a third division Cronos impersonator. Since he appears to be obsessed with Venom, he’ll probably see this as a job well done, but it’s rather hard on the ears. The reasonable riff subsequently loses its way once a sheet of black metal shrillness is chucked wantonly into the mud and any promising beginnings are soon left behind. With that track ending very abruptly, it’s quickly onward and ‘Osliagath’ sounds even more like Venom with the band bashing away while the badly mixed vocals grumble away. The drumming is tight – and loud – but it’s not enough to save face. Slowing down a little to accommodate a lead break, things remain pretty average, as the band presents not so much a guitar solo, rather more twin leads sounding like shrill pneumatic drills. Once the guitars are subsequently replaced by emptiness and a few wayward bass notes, it comes to an end and it’s all felt rather pointless.

Hitting hard with a NWOBHM riff, ‘The Cult’ initially promises a huge improvement. However, it soon becomes clear that any musical prowess only holds fast during the instrumental sections. Probably the fault of the producer rather than the band themselves, things turn to distorted mush once the vocal arrives. What once sounded okay, now seems like amateur hour; the treacly sound is very off-putting. A closing instrumental workout – including a more quirky time signature – shows how these guys could probably play better than they do, so it’s a pity most of their material is terrible. ‘Grond’ takes the Venom obsession and applies it to a doom metal riff, which is a bit better than the usual, but a bad vocal and undecipherable lyric add up to disappointment. Even if you love a heavy riff, this is a waste of time, while ‘Knights In Sauron’s Service’ – at least musically – is unashamed plagiarism. It’s arguably what the band does best, but why bother listening to this when you can dig up ‘Black Metal’ and ‘At War With Satan’ and hear it done properly?

The rest of the album was so obviously recorded at a different time and with an even smaller budget. The last four tracks come with an empty demo quality where the bass is almost non-existent. In many ways, it makes the band sound even more like Venom (if at all possible), so maybe that was their intention, as their fandom appears to reach obsessive levels. Aside from an amusing homage in the title, ‘In League With Sauron’ is Venom by numbers, aided by an empty mix, while ‘Dwimmerlaik’ brings much more of the same, but played much slower. As songs go, the latter is utterly forgettable, save for a cold guitar part that wouldn’t be so out of place on a Southern Death Cult recording. ‘Harrower of the Dark’, on the other hand, has plenty of gusto…but nothing too melodic to compliment the enthusiasm. The drums sound hollow, the variety of vocals – treated heavily with a proto black metal echo – are even more so. Once you factor in a careening guitar solo with Akiva not always caring to hit correct notes, this track becomes yet another Venom wannabe. By this point – assuming you’re still listening – you’ve heard it all before…and it wasn’t much better first time around. Taking their preferred digestible track lengths and stretching to an epic six minutes for album closer ‘The Palantir’ doesn’t seem like the wisest of ideas but, in reality, it’s a three minute song padded out by minimalist instrumental guitar passages and the sound of wind. It’s got no real momentum. The instrumental parts are boring…and the heavy parts? You guessed it…it’s Venom a-go-go. By the time it’s all finished, it comes as a relief.

This record is pretty bad. The playing is often rough, the production rougher. The world doesn’t really need a third rate Venom: this style may have been ground breaking on all fronts in 1982, but by 2016, this all just sounds like a low-budget mess. Everyone sounds like they’re bellowing through a tunnel and the ugly vocal style and harsh guitar sounds make it difficult to work out the lyrical stories – it’s often only the titles that give away the Tolkien leanings. Unless you fancy experiencing what is ostensibly a Venom tribute with a Hobbit and wizard infatuation, ‘Kings In Sauron’s Service’ is probably best avoided.