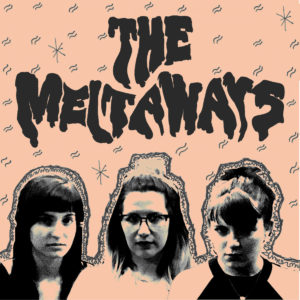 A few months later, they released an equally potent follow up (also self-titled) on Brooklyn’s independent What’s For Breakfast? Records, cramming four more fiery tunes onto seven inches of plastic. Although ‘Friends First’ appears to have an increased sense of melody in the way that Beck Kitsis’s bass has a much fuller sound and the guitars – while still off kilter – start the number with a full chiming sound, it’s essentially more of the same. Those elements of melody are quickly kicked into touch once a dual shouting vocal takes a hold, presenting some really distorted voices. First listen suggests it’s all a bit too trashy…and then something happens. “You’re living each day in denial!” screams a chorus, like a left-hook of vocal spite: a wake up for seizing the day; a jibe at image over substance bands who think they’re treading the same musical path. It almost doesn’t matter how you chose to interpret these barbed sentiments – combined with a tune that soon grows into a great alt-rock riff, repeating and subsequently repeating and slowing, it’s a worthy companion to previously extant Meltaways recordings.

Adopting more of a punk ethic, ‘Enough’ makes a much bigger feature of Allie Brasch’s drumming. Taut, heavy on the toms, always pushing forth, we get a strong feeling of togetherness within the rage and once the vocals settle, the style is something that could easily be influenced by an early Red Aunts track. At the point where this feels as if it is the best The Meltaways can deliver in terms of punk, ‘Home’ knocks it for six. Stoking up the spiky edges and distorted vox, things reach peak frenzy during this track; a punk assault that’s driven by buzzsaw guitars and frantic vocals reminiscent of Gainsville’s Genovia Forever, in the main, it’s brilliantly coarse. Touches of melody cut through, however, thanks to a great instrumental breakdown and some top drawer drumming, but even at its most accessible, everything comes with a harsh and sometimes ugly approach that quickly sends the weak packing. It’s raucous as fuck but, by turns, is also hugely catchy.

Lastly, ‘Flight’ captures a fuller more accessible edge to The Meltaways’ sound, combining garage punk noise with an extra layer of ringing guitars. Throughout the near three minutes, the energy is immense; the guitars have a much more twangy style than before and the way the atonal voices drop in and out of the verse riff is impressive and of the purer garage rock style. Shifting into the chorus, there’s a classic early 90s garage punk sound – the shrill lead guitar work is especially appealing and a belated appearance by a muted chopping riff suggests this number is far more well rounded than everything preceding it. It’s like hearing a band from late 80s Olympia, WA making their mark on something from Buzzcocks’ ‘Spiral Scratch’ EP…and it’s devastating.

2016 saw a couple of new bands breaking through who mistakenly saw their sound as having the spirit of the original riot-grrl movement. One, in particular saw their easily marketable second tier grunge revival music and quasi-manufactured image as a genuine continuation. Forget the musically watered down and the visually sharpened up: The Meltaways are the real deal. It’s often harsh, but within this EP lies a power and belief that is an easy match for Huggy Bear, for Bikini Kill and Red Aunts. Dear Kathleen…despite so many who seem to have misunderstood, your musical manifesto lives on.