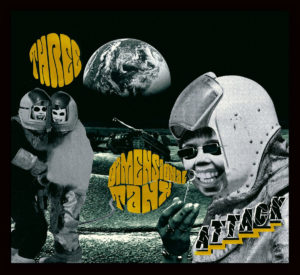 With an inventive approach that combines indie rock with psychedelia and a touch of 70s Krautrock, sci-fi obsessed Lancaster band Three Dimensional Tanks fill their fourth album ‘Attack’ with tunes that can be sharp and upbeat, lax and hazy and sometimes mange to be both at once. For lovers of music driven by retro organ work, it’s a recording that needs to be heard, since the energy these guys sum up is really impressive.

Attacking like the fiercest garage band you’ve heard since The Hives burst onto the scene with ‘Barely Legal’, ‘Motorbootin’ smashes into your cranium with a relentless beat, high octane guitar riff and a slightly yelpy vocal that really accentuates the boundless ferocity of an unquestioningly tight unit. Somewhere in the back of the raucousness, an organ pipes out as if channelling Question Mark And The Mysterians via some sci-fi b-movie hell. All wrapped up in well under two minutes, it has a punky intensity that’s pretty much guaranteed to get garage heads jumping. Moving straight into ‘Scene Not Heard’, the twin guitars from Pete and Richard lay down a fuzzy sound that’s an amplified reworking of heavy sixties psych, while frontman Spacey adds a slightly hazy vocal that has the natural feels and flows of 90s Manchester, the band taking Inspiral Carpets influences and shaking them with a Roky Erikson wildness. This opening couplet is enough to persuade first time listeners that – despite their outward quirks – 3DT are a band to take very seriously.

As expected – as it would take a foolhardy band to try and keep up the pace much longer – ‘Spacey’s Cure’ drops to a bouncy, more indie vibe. Although still heavy on the guitars, this time Spacey steps to the plate with a distinctive organ riff, something derivative of Clint Boon, and with that adds an incessant melody over the fuzzy backdrop. The chosen organ riff is defiantly Carpets-esque; his vocal, once more, sort of lax but friendly. Everyone sounds as if they’re having a good time creating these retro sounds – and in neo-psych terms, it’s all very accessible, before ‘Breathe Breathe Breathe’ comes back full throttle with garage punk anger. The very British vocals cry and shout in an almost unhinged way – especially the backing vocals – but the guitars ensure there’s a quasi-melodic edginess at play throughout. Echoing S*M*A*S*H, then cranking the speed, it’s 3DT at both their most shamelessly disposable. Perversely, it’s also 3DT at their most exhilarating; if this is to your taste, there’s no way you’ll resist the urge to jump up and down like a twat.

Stretching out to almost five minutes and bringing the album’s first half to a thoughtful close, ‘Trip Hazard’ is very much a track of two moods – a proper audio split personality. The band first set about laying down a spacy groove on a tune that sounds like a heady mixture of Pink Floyd’s ‘Careful With That Axe, Eugene’ coupled with the pacing of Suede’s classic ‘So Young’. The guitars weave various distorted melodies, but it’s an atonal analogue keyboard that wins out, being one part Tangerine Dream and three parts forgotten psych band. Having worked this into listener’s brains for what feels like forever with it’s slow and moody style, the band then switches gears entirely to embark on crashing indie rock fare that gives drummer Loz a genuine workout. The two contrasting styles should jar, but somehow it makes for a great listen. Once the upbeat freakout is done, 3DT then go back to the start and do it all again.

An album highlight, ‘Pink Spaceship’ hits with some buoyant indie rock, it’s keyboard riff occasionally sounding like the theme to 8:15 From Manchester (a mostly forgotten magazine show for kids broadcast in the 80s; theme music supplied by Inspiral Carpets…so there’s a pattern here), before descending into an instrumental break full of whirling and whirring guitars. Aside from the obvious energies, this track has other notable qualities: the drums are tight, the vocals are snotty and the aforementioned guitars are good and spiky. Given the funk elements and jazz fusion-ish leanings, ‘Do Electrical Shoes’ should have been another stand out. Again, Loz’s drumming is terrific, but he’s pipped by Sean on the bass, weaving a great melody in and out of swirling organs and guitars. Sadly, it’s a case of great music let down by repetitive lyrics and a sloppy vocal. The heart of what usually makes 3DT so cool is still there, of course, it’s just that – as evidenced on the first half of this elpee – they’re capable of so much more.

Taking the opportunity to crank up the guitars again, ‘ETA-3000’ delivers a thumping beat, garage rock guitars and a whole world of organ, almost as if Buzzcocks had discovered the finest freakbeat 7” from 1968. The riffs are fast and sharp, the organ frenetic – musically it’s only a slight variant on 3DT’s preferred sound, but souped up with a vocal that sounds as if Jilted John wandered in, there’s both a carefree rocking feel to everything as well as a sort of naivety, while the pounding ‘Widdershins’ adds ugly electronic sounds to a whirling guitar freakout. Instead of dropping into Clint Boon mode, Spacey appears to hammer out a drone chord instead and the result is a claustrophobic mess. Noisy without being heavy or confronting, this heavy space rock jam is by turns both exciting and hard going. It’s not until the end that the best melodies appear, but when they do, it’s really uplifting. …And just as they get hooked into a melody, they decide to call it a day.

Tacked onto the end of a mostly enjoyable disc, ‘Son of Go’ follows a much earlier 3DT song with a short 60s inspired noise, topped by handclaps and a cheeky organ. It’s sadly spoilt by a bad vocal, but it’s over soon enough at barely two minutes. Finally, a six minute workout ‘Astral Plane Flight Attendant’ feels like it’s purposely extended just to bring the album up to the required length. It’s not without merit; Loz’s drumming is great; the expanded usage of distortion and guitar effects pedals gives a doomy space rock edge and somewhere among the noise, the bass weaves back and forth with a great sound. It’s just too long – like half of the tracks on your average Hawkwind studio album, it might have worked better had the band realised what was of most importance and pruned a couple of minutes. In the live setting, of course, it’ll be a completely different story.

Perhaps the world needed something that sounded like The Thirteenth Floor Elevators meeting with post-Syd 60’s Pink Floyd and rearranged by Clint Boon, but this probably won’t be for everyone. Somehow, though, when straddling that fine line between the messy and calculated, Spacey and co show off an interesting slant on some familiar themes. ‘Attack’ sometimes tries that bit too hard to be quirky, but it still results in an an album that – when on form and in all of its retro cool – is both energising and fun.