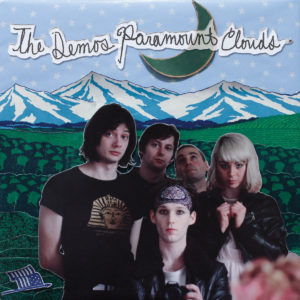 When New York duo The Demos released ‘Lovely‘ back in the mists of 2011, it was obvious that they recognised a hook and knew their way around a reasonable alt-rock/power pop arrangement. Sadly, the lo-fi nature of that recording, essentially demos passed off as a finished product, didn’t really show them at their best. There were at least a handful of tracks scattered among the dozen that wanted – even needed – a much better send off than they were afforded.

Fast forward five years. Five years is a long time for anyone within the music business. In that time, Metallica might have demoed a couple of new tracks; Guns N’ Roses have thought about a new album but it might not appear for another decade; lots of great bands will have broken up. For The Demos, half a decade shows that it can work wonders: during that time, not only did are the Rochester, NY-based duo stick it out and write new songs together, but they expanded into a fully fledged quartet, with real drums and everything!

“You turned my persistence into gold”, sings frontman Jason Milton during opener ‘I Don’t Mind’, almost capturing both the struggle to get the band to this point and his pride at the end result. In reality, the lyric seems to recount a relationship where one party kind of absorbs the other, but taken at face value, you could say the former actually applies. Musically, there’s still a hint of homespun edginess, but the way the vocals croon against a circular keyboard motif and steady drum beat really catches the ear. Moving into what passes as a chorus, the staccato guitars add an extra layer and by the second verse, given time to adjust, the band demomstrates a sound that almost seems to mix twenty first century alt-pop with a more 80s sound. By the time the instrumental break rolls around – a few bars of unfussy fuzz guitar – the track starts to feel complete.

With more focus on the guitars, ‘Clearly’ has a choppy power pop vibe, not so far removed from Ric Ocasek‘s underrated ‘Troublizing’ and even possessing a touch of the glam rock of the forgotten Lashes. Backed with female wordless harmonies, the vocal sounds ever more assured…and the booming chorus – all harmony vocals and sharp guitars – is fabulous. The works on ‘Lovely’ always suggested there was talent in The Demos, but almost nothing prepared the listener for this. Those guitars make a strong comeback for ‘Hardly Done’, a track which once heard a couple of times really impresses. A tough power pop workout that’s very well produced, its gruff but sugary style makes a huge feature of a strident rhythm and superb vocal. With a lyric that seems to question middle age and strive for the positive (“too young to read the lines on my grave”; “Now I feel at ease, I dried the pen that wrote my lease on life”) and a heavy fuzz bass, there’s a great appeal throughout. The sharp production brings about a brilliant old fashioned stereo split, which seems at odds with the late 90s sound, but all thrown together, it works and it’s surely one of the best tunes The Click Five never wrote.

With a slower approach and an even bigger presence of vocal harmonies, ‘Another Day’ is very radio friendly. The keyboards pump out the sounds of cellos, adding a retro bent to a kitchen sink arrangement, whilst counter vocals on a simple hook are especially appealing and the lead voice calls out with a real clarity. Although a slightly more pop direction for The Demos sits at the centre of this number and there’s a slight shift away from the guitars, thankfully it doesn’t water down their sound too much. Imagine if the Brian Wilson obsessed productions of Parks and Jim Boggia applied themselves to The Killers – it might come out sounding something like this. ‘Better’, meanwhile, leads off with a huge drum sound and stabbed piano chords, hinting at something even more retro. What transpires is a number that’s harmonious and almost 70s sounding beneath the ringing guitars. While the main melodies are carried through a forthright vocal, there’s a lot going on; the space between the instruments approaches a perfect mix – while the guitars tend towards the loud, the bass is high and the stabbed keys from the intro never subside. It’s one of those tunes that’s sort of familiar and yet the influences aren’t always as sleeve-worn as with some bands. Fading out with a steady rhythm topped by a world of distorted guitars and crashing drums, The Demos show that their brand of power pop at last has real teeth.

With ‘Paramount Clouds’, The Demos truly come of age. Their once rough and ready DIY songs now shine brightly, as all underground power pop should. With a full band in situ and the legendary Chris Lord Alge handling mixing duties, this release makes The Demos sound the way they always should have sounded. These five songs show the style of a band who shimmer like silver with some power pop gold.