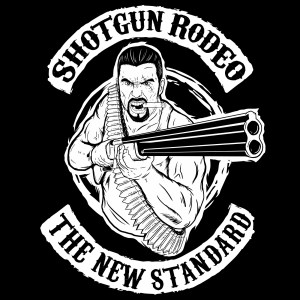 Norway’s Shotgun Rodeo released their debut EP in 2012 and subsequently proved fairly prolific, releasing another two discs over the next three years. Fusing various rock styles, 2016’s ‘The New Standard’ is a hard and riff-heavy six-tracker that, influence wise, is sometimes hard to pin down and occasionally just as hard to take seriously. In this respect, Shotgun Rodeo are frustrating. Their sound is full of great riffs that sadly collide to create a mess of hard rock that never quite knows what it wants to be. This EP includes sounds that appear somewhat contemporary at the time of release – with bits of Avenged Sevenfold bubbling under the surface – and yet there are other elements that borrow from thrash’s past glories, as well as occasional rhythms hinting at the most melodic end of something more extreme. And it’s all topped by a fairly old-school vocal. It’s like experiencing Pantera’s ‘Cowboys From Hell’ by way of Skid Row and with added bits of Buckcherry but with less trash…if that even begins to make sense. Needless to say, it should be better than it is.

At their heaviest, Shotgun Rodeo can whip up a riff storm. As evidenced on ‘Drawing Blood From Stone’, a track that brings a hugeriff to the fore, they’re entirely comfortable doing so, as a chunky guitar sets itself against rattling bass drums as if channelling Pantera circa 1990, with a touch of Godsmack and Avenged Sevenfold thrown in for good measure. Those guitar tones – darker than most 80s metal fare – are a highlight and the vocals take on a deep tone to match. There are times when the voice rises to a shameless old-school squeal, befitting of the classic metal tendencies Shotgun Rodeo are so keen to put forward and – somehow, although god knows how – everything works well. The chorus, meanwhile, is big, but doesn’t quite hit in the way it should due to excessive bass pedals proving far too distracting, but you can’t have everything. ‘Uncontainable’ has some lightning fast bass drums providing power (possibly triggers) and various choppy guitar riffs that show off a great tone. “These are shark infested waters and it’s up to you if you sink or swim” suggests frontman Nino Escopeta with the arrogance of a pseudo Sebastian Bach, before the riffs intensify and the band wedge a few 80s thrash motifs against the once slightly 90s sounding riffs. Sometimes a contrast can be distinctive; in Shotgun’s case, it’s almost like they don’t know what they want to be, so they’re attempting all of it with absolute foolhardiness. Individually, all of the riffs are great, of course, whether the meatier melodic metal variety or the headlong staccato attack, but put together in this way, it’s not always as good. It’s certainly not as good as they think it is.

The arrogant streak introduced during ‘Uncontainable’ doesn’t subside, lending itself awkwardly to ‘Around The Bend’, a bit of a musical disarray that sounds like a jam between Ugly Kid Joe circa 2013 and Avenged Sevenfold. Like two half finished tunes welded together with a devil may care bravado, it’s a hard listen, but as before, the riffs – when taken at face value – are great. It’s the general song writing that’s the real problem here, with acronyms and clichés wheeled out in an unsettled marriage of convenience. The tune’s saving grace comes during the instrumental break which features some great thrash moments and some melodic twin lead. ‘Scatterbrain’ takes a huge influence from Pantera’s groove metal intents circa ‘Vulgar Display’, then fuses that groove with a more melodic hard rock chorus – with a surprising success. During this track, when trying far less hard, the band show some great skills for arranging, while the forthright lead vocal conveys just the right balance between melody and grit. The lyrics aren’t the most sophisticated, but everything works well together, with this track asserting itself as the EP’s most memorable.

The title track has a genuinely classic riff, like a heavier version of Skid Row’s ‘Slave To The Grind’ and also some superb lead guitar work with a lovely retro tone. These factors alone should have allowed the track to be a highlight but, man, the lyrics are beyond bad. In fact, they’re fucking terrible. This track is little more than a three minute diatribe where the frontman slags off his many detractors as if he’s already as famous as Axl Rose, a feat made worse by couplings like “it’s such a disgrace / I’m gonna shove it in your face”, as well as other similar trite and lazy fodder, eventually dropping to jaw-dropping despair with the phrase “eat my shorts!” (Yes, really). The band aren’t without humour, though – this has to be one of the only metal songs to name check Sonic The Hedgehog unexpectedly – but quirks like that are never enough to forgive the awful lyrics elsewhere. Such a shame; there’s rarely been such a waste of a riff and a decent solo. ‘Batshit Crazy’ (chosen as a single) isn’t any better. You can guess the kind of carefree “we’re mad, us” atmosphere Shotgun Rodeo are hoping to summon up with this piece of junk. Again, it’s rather unfortunate, as some of the riffs – and some really energetic drumming – showcase musicians who are much better than their material.

Allow yourselves time to tune into their hotch-potch of rawk and ‘The New Standard’ is sometimes better than it first seems. The production is decent and riffs are great, but the band lose a great deal of face for passing off some absolutely appalling lyrics – there’s just no getting around that. That said, a couple of the songs – provided you like it shamelessly cheesy – show Shotgun Rodeo’s mettle for metal. With a huge amount of gusto and a disdain for fashion, here is a band likely to win over less uptight listeners, but until they find themselves a lyricist who isn’t a frustrated fifteen year old, they’re just never going to be able to take on the best.