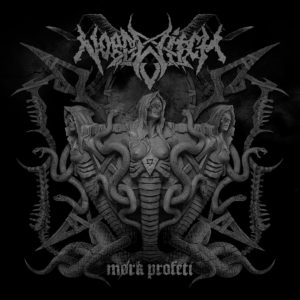 The album’s opening instrumental builds in a way that really shows a range of the band’s talents. There are huge influences from various practitioners of Scandinavian metal throughout the three minute workout and opening with a circular riff with a huge ringing sound overlaid by some rather 80s leads and minimal percussion, guitarists Leo and Max put themselves in the spotlight from the very beginning. With the arrival of the rhythm section, the tune gathers momentum and a greater meatiness, working through a mid-chug at first and then settles a more bass drum driven black metal shred. Even at the heaviest end of things, someone in the band always strives for melody as hard thrashing techniques and a tough twin lead are brought forth for an impressive finish. It’s obvious from just this short piece not only can these guys can play, but they also understand the importance of light and shade and how this can actually make extreme metal appealing to a broader demographic. ‘Dominion’ ushers in a few harsher elements; some of the thrashier parts and soaring leads are pushed aside for faster melodic death traits, as dictated by frontwoman Masha’s devastating growl, truly impressive, in that unlike work by many of her peers (growing in number all the time) it rarely gives indication of her sex. In terms of death metal equality, she stands on a high podium. It’s not always possible to decipher the stories and messages behind those forceful noises, but it’s a powerhouse performance all the same. For the end of the track, the death elements subside and some traditional sounding metal pushes forward to allow for some faultless guitar interplay. Provided you do a little death metal and the vocal is to your liking, then this – and most of what follows – should be high in appeal.

‘No Regret’ begins with a grandiose intro that could easily be compared to a couple of others on the album, suggesting that for the more critical listener NordWitch could be labelled a touch formulaic – but that’s really not the case. Soon enough, another great metal riff bursts from the multi-layered shredfest, this time taking heavier cues from classic thrash via a world of chugging downstokes. Against the riff that finds a space somewhere between Arch Enemy and OverKill, Masha growls with intent. It’s during the instrumental breaks this number really impresses, though, as Max adopts a guitar tone that’s retro and classic as he lays down a soaring lead. Even more melodic, ‘Walker From Shade’ features a really old school riff, very much the kind you might stumble across during Slayer’s ‘Seasons In The Abyss’ peak. The lead work and arpeggios are suitably sharp, also displaying a melodic bent. The slower and darker tones throughout the track really allow the guitars to make a statement, always combining heaviness and melody throughout the instrumental passages while, as before on the verses, the vocal parts increased intensity comes through a world of growls. It doesn’t add anything new to the genre, but everything is played with passion; the way the vocals shift from deep gruffness to longer notes – occasionally evoking the sounds of extreme weather conditions – is both impressive and entirely sympathetic to the musical backdrop.

‘To The North Gods’ sets off on a completely different musical path, opening with finger picked neo-classical acoustic work, but soon enough, that moves aside for a massive power metal riff, all twin leads and bombast. With two great musical traits demonstrated to a great ability and within a short space of time, this promises to be a great track. Eventually moving into the main riff, the verse fuses death metal vocals with huge melodic riffs, with Leo’s guitar work laying down some great soaring sounds as a counterpoint to a death metal growl. With a compliment of double bass pedals adding power to a riff with folk metal traits, it just seems to get better and better with each passing mood. Masha, meanwhile, growls with ease – her voice never having the higher registers that almost all female death practitioners possess. It’s got a bit of everything…and by the time a huge solo presents itself and the track fades unexpectedly, you’ll probably wish it hadn’t. While everything is superb, the ending doesn’t feel especially natural – still, that’s not enough to stop this being the album’s best track. While the bulk of ‘Lady Evil’ is happy wheel out various extreme metal traits you’ve heard from NordWitch previously, it doesn’t stop this Soilwork infused speedfest being enjoyable. Drummer Eugene comes across as a powerhouse; Masha attacks her vocal performance with a real intent and the result – somewhere between Scandinavian melodic death and extreme thrash – works excellently and ‘The Call To The Ancient Evil’ essentially gives the album an old-school death classic, with the drums much heavier on the wrist action and the bigger riffs giving way to something more grind-oriented. Although more predictable at first, the mid-section adds some wonderful guitar arpeggios and another nod to folk metal, so it’s well worth a listen.

‘Messiah of Death’ closes the album with NordWitch at their heaviest. Their most black metal influenced riffs begin this last musical journey with passages swamped by pneumatic drums. At the point where it feels as if this will be the main musical route, a melodic riff cuts through the fug with a style that, again, almost has a lilting folk tinge within its heaviness (though with the album so entrenched in influences from ancient Scandinavian mythologies, perhaps this is not so surprising). Between these two contrasting styles, there’s a world of generic death metal where Eugene provides the real driving force throughout. While the song isn’t particularly memorable, the drums are a veritable feast of noise, underscoring a tough riff and surprisingly melodic lead work. If nothing more, it’s a solid addition to the album that guarantees that once it starts to fade, the grinding folk riff will be the last thing you remember…and the growling, of course. Always the growling.

From a genre perspective, this is a great album. Musically, here is a band that showcases various multi-layered alternative metal and thrash aesthetics throughout an incredibly focused and solid black-death oriented forty minutes. Provided you’re not put off by a semi-impenetrable growl – be it male or female – than ‘Mørk Profeti’ more than delivers the goods. Great drumming; intense vocals; taught riffing and an ear for a very heavy melody, it’s all here. If you’re looking for something to compliment those Arch Enemy and Decaptiated discs, this is pretty much guaranteed to please.