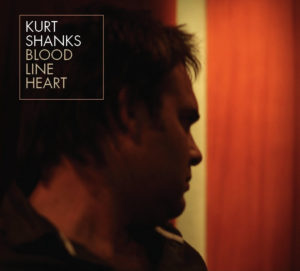 In the autumn of 2011, Kurt Shanks released his solo debut EP ‘Seven Flights Up‘, a short mixed bag of styles that gave a fair overview of his broad talent. Ranging from thoughtful acoustic twiddles to solid singer-songwriter fare to the title cut’s rhythmically heavy workout, it promised good things for the full-length which was due to follow at some point in the coming year. It felt like a long wait – almost exactly a year, in fact – but it was ultimately worth it, since the eleven tunes on ‘Blood Line Heart’ provide a much better look into the workings of a gifted songwriter…and in lead single ‘Shake Shake Shake’, the world gets an immediate power pop classic.

For the few people who heard the original EP, two of the album’s tunes will be familiar, as both ‘We Shall Have Another Day’ and ‘Shoot To Kill’ are reprised. Interestingly, while the latter was arguably the weak point of the EP release, as part of a longer collection it sounds more assured. The Ryan Roxie-esque trashy qualities still don’t match Shanks at his more thoughtful, but in terms of upbeat fun, it’s a tune that shows a man who knows how to gee up an audience and there’s no denying it comes with a great hook. Neither of the previously released tunes are as impressive as the album’s opening cut, however; the aforementioned ‘Shake Shake Shake’ is Shanks gold standard, a near perfect slice of power pop. From the opening new wave keyboard sound colliding with a semi-acoustic strum, Shanks reeally grabs his audience with the retro sounds working well against his very natural voice, with the stripped back style allowing his Kiwi accent to come through. Picking up the pace for the chorus, an incessant use of the title is more than infectious – and Shanks knows this too; going for the drive-by equivalent of attention grabbing, the track is in and out in barely two minutes. Fans of older power pop like The Rubinoos might just find something that sparkles here, but it’s ever more likely to grab the ears of those who loved Butch Walker before he went country. Whichever way you look at it, this tune is a power pop hit.

Equally short, ‘Port Song’ brings forth Kurt’s liking of all things rhythmic. In a change of mood, droning keyboards are pierced by busy toms, the combination of which lends a very dark atmosphere, the only real lightness coming via a vocal that’s very assured. If ‘Shake’ was all about the hook, this is all about the groove; dark and almost arty, though without any pretentiousness. In some ways, it’s hard to imagine the same audience being entertained – let alone thrilled – by both these tracks in the same way, but placed at either end of the musical spectrum, it suggests there’s a lot to immerse yourselves in when approaching ‘Blood Line Heart’ for the very first time. Stoking up the rock ‘n’ roll, ‘The Real You’ comes loaded with a great dirty guitar sound, sounding like Keith Richards via Paul Westerberg. This is one of the styles in which Shanks sounds most at ease – maybe it’s the no-frills approach that allows him to appear more open, or maybe there’s something in the timeless style that brings out the best in so many performers. Rather than leave things strictly bar-room, though, Shanks brings a little extra power pop flair; there are hand claps aplenty, a tough jangling backline and a hearty sneer that’s a dead ringer for The Soft Boys’ classic ‘I Wanna Destroy You’ – all absolutely winning ingredients that, when mixed together, create a killer tune.

In a similar vein, ‘Lost Without Trace’ melds a slightly unsure vocal with a tough guitar riff. Although springing from wobbly beginnings, it’s one of those numbers which sounds better as it goes; the solid drumming is key in making a strong pre-chorus come to life, a chorus that, again, isn’t a million miles away from Robyn Hitchcock’s Soft Boys work, while also tipping the hat to ‘Hang Time’ era Soul Asylum. By the time we reach the climax, the number has blossomed into a decent rocker and surprisingly feels like it’s all over just a little too soon. Taking that retro guitar sound and using it to create something more cerebral, the moody and waltzing ‘Future To My History’ brings out the best in both Shanks’s vocal and his overtly retro backing band. Blending the twanging guitar with an almost alt-country vibe, it’s possible to hear a passing resemblance to the Lemonheads’ ‘Ride With Me’ while simultaneously understanding that Shanks’s own voice is dominant. As the tune reaches the end, his retro rock gets a much fuller send off as a choir of voices swells to fill out a rather understated piece of song writing to great effect. There’s an old soul here, the kind that will help this tune – and, indeed, a few of the others – endure the inevitable passing of the years.

‘Honey Love’ shows off Kurt’s reflective side as he delivers a hushed voice over a simply strummed guitar. Ensuring things never slide too far towards saccharine city, his backing band lend some very thoughtful assistance, with the use of electric piano and strings seeming absolutely essential to the beauty of the end result. There’s something distinctly Antipodean about the overall sound, too – imagine a Neil Finn tune worked into a Badloves demo and you’ll have half an idea how things pan out. A similar retro cool colours ‘These Are The Days’, where Kurt and his acoustic are joined by tasteful steel guitar, warm bass and piano. While his lead vocal mightn’t be as polished as some, his performance still appears somewhat effortless as he holds onto a very natural style. It’s a performance that, coupled with the kind of unassuming and reflective chorus hook that would have suited Tom Petty in his pastel shaded ‘Wildflowers’ guise, ensures another stand out track. Elsewhere, ’15 Years’ provides yet more of a glimpse into Kurt’s softer side, as a ringing guitar and simple bassline provide a great sound on a country-ish number that sounds like a Westerberg composition re-arranged by Josh Rouse, while ‘Leaving’ brings a thoughtful tone as a guitar chimes against a solid rhythm, allowing the perfect balance between wistful air and retro sounds. In an alternate universe, this could’ve been more buried treasure from Jeff Tweedy’s vast catalogue.

There are no genuinely bad tracks on this full length debut, which is surprising given that Shanks hasn’t always entirety settled upon one particular style. Those who heard the EP previously will love ‘Blood Line Heart’, potential curveballs and all. For those unfamiliar, throw yourselves into this album at the earliest opportunity – it might not always be completely consistent, but most of the performances show off a well-rounded talent, leaving behind a selection of songs that shouldn’t wear out their welcome too quickly.