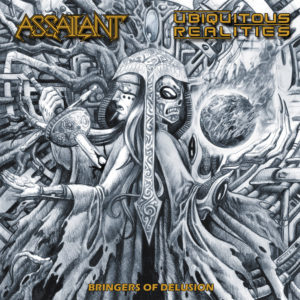 Taking cues from lots of classic thrash but adding their own slant, Assailant are by far the more accessible of this pairing and their four tracks mix up thrash techniques from the glory days of metal with some spasmodic and progressive passages, pushing their rhythmic sound towards middle period Soilwork. ‘The Leading Spectre’ leads off with the kind of riff that filled many a second tier thrash record, taking cues from OverKill and Death Angel, as Ricardo Arce tears into a relatively high-toned and circular sound, providing a great cue for the rest of the band a bar or two later. With the rest of the arrangement falling into place, a second guitar thickens up the sound, while drums tear forth with plenty of pedal work. With all of the key ingredients in place for a solid thrash-based listen, Jose Del Valle barks his vocal in a particularly harsh way, reminiscent of ‘World Demise’ era Obituary, so it’s a bit of an acquired taste. Musically, things move from strength to strength, via some great riffs and into a couple of more atmospheric passages, much in the way Metallica had during their progressive thrash indulgence of ‘…And Justice For All’, with bassist Daniel Muerillo dropping in some complex phrases throughout. No matter what angle the band approach this tune, however, it’s the lead guitar breaks that win the day, with some fast, hard and nimble soloing to entertain.

‘Hands of the Saints’ goes deeper into a world of aggression, cranking the speed at first and opening with an impressive bass rattle that recalls David Ellefson’s work on the original recording of the Megadeth classic ‘Take No Prisoners’. Shifting into a more spacious groove that allows a few meaty chords to take hold, it’s difficult at first to work out where things are going, but by the time the vocal presents itself, everyone pulls together and the band drops into a fast, driving riff. For the instrumental breaks, the old-school breakdowns are as impressive as before, with Arce taking a couple of cues from Jeff Hanneman when it comes to soloing – shaking his soaring melodic edge with a few jarring notes and a very sharp presence. With the tune shifting between various time signatures to suit, it’s all here, and Carlos Guillen shows off an impressive array of drumming skills.

Moving away from more obvious traits, ‘Delusions’ has an interesting sound at the outset, sort of like hearing Slayer powered by an odd downstroke coupled with Anthrax man Charlie Benante’s heavy bass drum style, but soon morphs into some busy thrashing. A quirky lead guitar sometimes appears to be playing an entirely different tune but provides extra interest while a slightly shouty voice holds everything together…and, somehow, something that should be messy sort of works. Better yet, taking some unrelenting and speed fuelled backdrops and interspersing them with neo-progressive passages as well as a few brilliant discords, ‘Suspension of Disbelief’ shows off even more of the band’s talents. During this complex musical manoeuvre they explore a far more distinctive sound that has as much in common with Swedish melodic death and progressive sounds as it does San Francisco’s Bay Area from 1988. The bass busies itself beneath hard chord progressions; the drums attack with an unwavering certainty, showing some very old-school traits even at times the rest of the music is headed somewhere more progressive…and the razor sharp guitar work cuts through everything with a defiance. It’s still got a thrash metal heart, but taking other influences in, it’s far more interesting than the earlier tracks. It’s a pity the low-budget leaves everything with a thin sound, but the material has some genuine promise.

Moving on to side two, Ubiquitous Realities are harsh. These guys work a fearsome brand of technical death metal that’s just not for the faint of heart. As if to hammer home their lack of subtlety, ‘Bringers of Malevolence’ opens with a lengthy, potentially offensive sample from the horribly crass ‘Tropic Thunder’ movie, before the band make a grand entrance with an unstoppable quota of pneumatic drums and a lightning speed musical force. The rhythm section appears so dense that the lead guitars struggle to escape, but occasionally a few piercing and rhythmic edges suggest there’s more here than the musical equivalent of heavy machinery. Then the vocal appears – and it’s a nasty bastard; a skull crushing, spirit destroying growl that’s so throat destroyed and ugly that it may as well be extra instrumentation. …And so it goes: the pneumatic edges suggest these guys are frighteningly tight, but in terms of giving the listener anything more beyond a sheet of bass heavy death metal, there’s nothing. Unbelievably, at the track’s end, there are a few bars that appear even darker, even more bass driven and even heavier. By this point – to borrow an almost unsuitably glib phrase to describe their intensity – they’ve really sorted the men from the boys. ‘Biological Demise’ occasionally seems a bit better due to the presence of a couple of interesting fills and a loud, rising guitar line. Those guitars hint at a bit more going on – particularly during the slower sections where there’s a weighty chug and there’s also an impressive solo – but as for a song is concerned…forget it. It’s here their technical edge does its utmost to create interest, but it’s not enough to make them any more accessible. It’s brutality cranked to the maximum and makes Ubiquitous Realities seem like Central America’s answer to Abaddon Incarnate. However, if you’re thinking of giving them up as a bad job after this…don’t. If you back out now, you’ll miss this release’s best music. Seriously.

The bass on ‘Alterated Perception Part 1’ is so deep, it comes through as a devastating boom on some of the lower notes, reinforcing the heavy angle. Thankfully on this three minute largely instrumental tour de force, everything that should have made Ubiquitous Realities great from the outset finally presents itself in full. The band take on a slower musical mantle, churning out deep grooves with a truckload of distortion – only this time not swamped by pneumatics. The guitars temper the death traditions with some superb djent tunings and the lead work is also downtuned and rather impressive. By the time the vocal comes in it seems surplus to requirement, but there’s little doubt – in extreme metal terms – the build up has been impressive. Into ‘Part 2’, too, none of the variety is lost, as UR set about laying down some fearsomely heavy riffs, slower than before, displaying a harsh djent sound intercut with some deftly executed guitar fills. It’s heavy but well layered with some great lead. It’s potentially been a very hard road for the listener getting to this point, but this two-pronged track is both fully formed and especially tight – for technical guitar playing and heavy riffs alike, it outshines everything else on this release.

For those deeply entrenched into really heavy music, ‘Bringers of Delusion’ captures three distinctly different moods from two underground bands. In terms of thrash based metal, Assailant show great skill at the basics – not as broadly appealing as Harvest or as unquestioningly professional as Backdawn – but often yielding enjoyable results, despite the wanting production value. Ubiquitous Realities, on the other hand, are ready to attack like a proverbial trojan horse: first seeming impenetrable, even ordinary the grand scheme of the death metal hierarchy…and then showing off some of the best heavy/alternative metal/extreme djent you’re possibly likely to come across, they come out on top. This would have been an okay release based on Assailant’s best efforts, but that final pairing from Ubiquitous Realities sets this album a good few steps farther up the chain. Hit ‘n’ miss it may still be, but the best bits are absolutely brilliant.