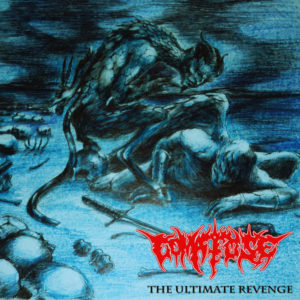 They say enthusiasm goes a long way. In the case of Filipino death metallers Comatose, it’s certainly true. With roots stretching back as far as 2003 and ties with a band called Church Burner, the band went through both a name change and various line-up changes before entering the studio to record their first official album in 2011. By this time, guitarist LD Lee remained the only original constant, but he never gave up on his quest to bring a brand of traditional death metal to the world. Even after the recording of the album, the band were beset by problems and the proposed release was cancelled.

Russian extreme metal specialists Satanath Records eventually stepped in and ‘The Ultimate Revenge’ finally saw release at the end of 2015. Whether or not it was recorded in 2011 or sometime later, the album possesses a timeless quality in death metal terms that means the it could have just as easily been written and recorded within the genre’s formative years. This, obviously, is a good thing.

Following a two minute intro featuring sounds of white noise, the title track leads off with a superb and slow-ish riff culled straight from Slayer’s ‘Hell Awaits’ days, with thin and echoing production values to match. The hollow guitar sounds are extremely nostalgic, but never detract from how well these guys play. The occasional lead sounds come across with a mangled Kerry King brilliance; the rhythms chug menacingly, while growling vocals move everything away from the Slayer camp and more towards Deicide. Most of the track cranks out a stodgy riff, but the drums seem insistent that things will eventually speed up, dropping occasional time-sig shifts…and by the time the featured guitar solo rolls around – more mangled squeals – the track cranks up to almost twice the speed for a huge finish. This is a great start, but ‘Army of Darkness’ is far better, presenting four minutes of classic thrash and death. The pneumatic verses are dominated by vocal extremity, but if you can make it past that, the riffs are top notch. Again, there’s a blatant love of Slayer (this time with ‘War Ensemble’ firmly in the line of influence), before a heavier chorus section takes over, trading in the thrash style for nods to Cannibal Corpse and Suffocation to keep things suitably heavy.

Taking the death elements even farther, ‘The Sickening Ways’ gives the drums and vocals free reign for maximum speed and anger and – if not clear before – this is the point where Comatose really assert themselves as great players. The time signature constantly shifts between grumbling extreme speed and a few quirks more akin to the progressive death metal of Imperium, while Lee, meanwhile, asserts his love of the more old school styles, occasionally injecting a riff inspired by Metallica‘s ‘For Whom The Bell Tolls’ into the groove. Somehow, even though this is a bit of a melting pot of metal, the coming together of ideas seems very natural. ‘Prophet’s Dream’ also shows off a few superb riffs, linking more obtuse angry sounds while simultaneously keeping everything very focused. It’s the kind of number that fans of the style will have encountered time and again, but Comatose should be commended for delivering the goods in such a straight and professional manner. Notching up even more speed, opening with a guitar solo and a few big squeals, ‘Hypochristianity’ seems to be meat and potatoes death metal from the outset, but the drums quickly assert their need to shoe-horn in some interesting fills, skewing the time-sig back and forth. Aside from the death growls, this number also includes a second vocal with a hate filled and scratchy black metal tendency, moving things a tiny bit farther from the expected, before a huge melody – possibly based on an old folk tune – takes the number somewhere entirely different. In a way that none of the earlier tracks suggested, here, Comatose show they are capable of taking death metal’s constraints and pushing their music in a more interesting direction. In many ways, of course, they’re probably right not to overuse this, since most of their output is classic death metal and would definitely already appeal to the more dyed in the wool fan.

A lightning fast circular riff and brutal drums drive ‘Plague Bearer’ into a death obsessed oblivion, before Lee steps forward with a nifty lead, his fingers almost dancing on his fretboard at first, before wandering into a hugely melodic twist – one of the only times the album’s limited production values let the side down. With the second half of the track expected to return to the more extreme, it’s a surprise when the death elements only make a brief appearance; instead, a classic thrash riff takes hold and Lee returns with more melodic lead work. In terms of the whole picture, the juxtoposition of grinding riffs and stronger melodies ensures it’s an album highlight, but in terms of showing what Comatose really do best, it doesn’t have the edge on ‘Sickening Ways’ or the excellent ‘Army of Darkness’. Rounding out the album, ‘Carnage In The Promised Land’ mixes some brutal drumming with a shredding lead guitar – again, not quite as sharp as it deserves production wise – while a dual vocal really attacks with sharpness and ‘Rivals of the Throne’ churns circular riffs and anger in timeless death metal abandon, presenting the bass in a much clearer fashion while throwing in a couple more nods to early Slayer en route. Like the best tracks before, it really exposes Comatose’s allegiance to the more straight ahead elements of death metal and shows off some amazing drumming skills.

Between the tight and terrifically heavy grooves and the semi-hollow production values, hearing ‘The Ultimate Revenge’ is like taking a trip back to the glory days of the death metal, when Deicide and Cannibal Corpse reigned supreme. If you want your death played largely straight and with a loving influence to the rawer days of 1990, look no further.