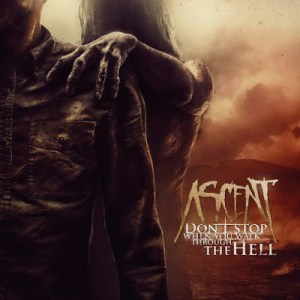 With a synth drone and other ominous keyboard stabs, ‘Lucifer’ sets the tone of darkness from the very beginning and following a brief howl of Siberian winds, some deep, almost doomy guitar lines crank out a slow and heavy riff. Unlike lots of music of the style however, the bass is still very clear and the overall heaviness is immense. Obviously, the band aren’t going to stay with the slow style for too long…and as expected, a flurry of pneumatic drums takes over soon enough and the sheer power of Ascent is unleashed. With that, too, Anna Dizendorf’s primal growl sits front and centre. “Your prayer will not be heard”, she opines, as her voice tears through the unrelenting sounds of a lightning fast backdrop. This is typical of the track’s verses – with Ascent pummelling away with sheer abandon – but there’s room enough to slow down en route for a fairly melodic solo. In all, this opener has all the bases covered and if this death metal style greets your ears with interest, the rest of the album should not disappoint.

Much better, ‘Chaos Bless’ mixes traditional death with a touch of heavy groove, much like Lamb of God during their earlier years. Taking into consideration a monstrously huge, chugging riff under a melodic solo and Anna’s voice chewing against a skedgehammer styled riff throughout, Ascent show they’re among the best when it comes to force, but in terms of sheer power, it’s all about those drums as Andrey Raevsky’s bass pedals work themselves into an absolute frenzy. He’s a great player – his work throughout the album is exemplary – but on this number, in particular, it’s clear that he’s so often in the driving seat. ‘Dead Silence’ has a great downtuned intro, complete with horsey guitar squeals, mixing Ascent’s typical heaviness with Soilwork’s wall of sound approach when it comes to heavy melodies. Moving into the verse, despite the drums taking things up a notch, the riffs carry through with brilliance, providing a perfect companion to the album’s strongest vocal. Instrumentally, there’s so much going on – beneath the downtuned heaviness, Evgeny Kositsyn’s bass work is furious and the lead guitar work, once again, straddles that perfect balance between extreme heaviness and 90s melodies. The whole album is strong, but this track is essential listening.

Briefly allowing some respite through cleaner guitar work, ‘Matter’ kicks of with an extended instrumental intro featuring solo guitar, much closer to the grandiose styles as heard on Metallica’s ‘…And Justice For All’ and a couple of other late 80s thrash classics. Produced well enough to hear fingers sliding on frets, this broadens the band’s musical scope somewhat. Bringing in a heavy riff and slow drums, the band take a huge leap into heavier climes, borrowing a little influence from Slayer, all before driving forth into some superb melodic death. Musically, things take a cue from classic Arch Enemy, with a few heavy melodies punctuating the general speediness, while Anna – as always, taking no prisoners – seems in very good voice; hugely growly, but allowing audible lyrics to slip through more than before. It may not bring anything new to the genre – female fronted or otherwise – but it sounds great. Then moving into the track’s extended coda, mixing a heavy doom riff with rhythmic stops and a superb bassline, Ascent really shine.

Proving they’ve not burnt themselves out by the midpoint, ‘Future Gestures’ comes loaded with a heavy Lamb of God infused riff, with downtuned edges sounding better and more fearsome than before – if, indeed, that’s possible – with a full compliment of pneumatic furies and ‘Useless’ thrashes relentlessly with more of the same, while ‘The Punisher’ brings some rather unexpected clean guitar strums set against a tribal rhythm. Like the intro to ‘Matter’, it proves that Ascent are capable of expanding their core sounds, but this number is at it’s best when going for those heavier moments. In this case, a dirty choppy riff is on hand to break up the more obvious death metal intents and in terms of taking an Arch Enemy influence and injecting it with touches of Lamb of God and Job For A Cowboy, it’s a winner; a genuine tour de force.

Ascent occasionally surprise, but the bulk of this album plays to tradition and for the death metal devotees, in terms of what it does, ‘Don’t Stop When You Walk Through The Hell’ ranks alongside Evil Reborn’s ‘Throne of Insanity‘ as one of the best discs of 2016. For those who feel that Arch Enemy have become too commercial, but maybe want something a little more digestible than classic Landmine Marathon, then this debut from Ascent should be considered a priority listen.