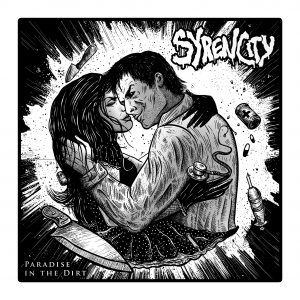 In the lead up to the release of their second EP ‘Paradise In The Dirt’, Bristolians Syren City embarked on a short tour with We Are The Ocean and Orchard Hill, bands which aside from being guitar driven, don’t always seem to share a common link. But then, already having shared stages with Cancer Bats, Skindred, Mallory Knox, Syren City seem keen not to be pigeonholed.

Having had lots of positive praise for their first EP, expectations were set high for that second recording, and despite only comprising three tracks, it’s a release that often feels like it packs a great deal into a short duration. Wasting no time, ‘It’s Morphine Time’ crashes in at speed with double bass drums and a shrill guitar sound before unexpectedly moving into a groove metal sound, before shifting again into sharp edged alt-rock sounds that alternate themselves with sounds somewhere between Mallory Knox and something slower and heavier. The music is constantly impressive – especially the parts with heavy groove leanings – but it’s the vocals which really stand out. To convey the constantly moving energy within the arrangement, there are at least three featured voices, all of which show a similarly restless spirit, shouting against each other, occasionally subsiding to allow a strong lead to carry an enormous melody. The heavy parts continue apace – the riffs seeming more important than any hooks – until tailing off with harmonic voices that almost have a British folk twang and an old heart. Almost. While not entirely clear what it is, there is the beginnings of a tale told here, and in the following track the band introduces us to what we should assume is one of the theatrical piece’s leading players…

In an almost complete change of mood at first, ‘Danielle’ works a bouncy riff that comes across as part indie rock and part rock opera, with simple, clean guitar riff and equally simple drum line providing the bulk of the melody. The drums are occasionally lifted by percussive lilts, but it’s always the vocal that dominates, this time with a slight emo-ish wobble as the protagonist delivers a street-based narrative that occasionally feels like a slight throwback to Green Day’s ’21st Century Breakdown’. Adding an extra guitar part with a crying edge for the second verse is a nice touch, showing the arrangements here have plenty of thought in their construction, but it’s the heavy chorus that’s bound to bring the most enjoyment. With the voice shifting from coy, firstly to a melodic alt-rock cry and then post-hardcore shouting, the vocals cover three very important bases, while the rest of the band settle into a superb alt-rock crunch, often impressive but coming to full fruition within the last few bars. To finish this chapter in the Syren City story, ‘10,000 Knives’ (released as a video single prior to the full EP) conjures imagery of savage streets, against an enormous rumbling drum sound and a compliment of guitars that have a tone somewhere between heavy alt-rock and the emo end of the punky scale. In terms of all round appeal, this is the EP’s best track, with a bigger focus on bass work, a very assured vocal and some fairly infectious whoahs, very much designed the live shows in mind. Although perhaps the most straight ahead of the three tracks, when things slow down a touch, the main guitar riff has a superb tone and adds something different, suggesting this band really aren’t keen on becoming too narrow when it comes to arrangements.

It’s fair to say that while these three tracks are excellent in their own way, their huge and almost overblown arrangements don’t really suit the minuscule nature of the EP format. After a short burst of music that feels like an intense adrenaline hit, ‘Paradise In The Dirt’ has all has the potential of leaving the listener wanting – and that may or may not be a good thing. For what it is, though, this EP is great. With ‘Paradise In The Dirt’, Syren City look out to the expansive horizon and ponder their future. There are many bands working in similar musical spheres, but so many seem utterly constrained by comparison.