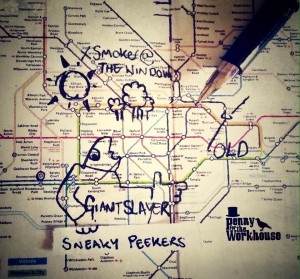 Penny For The Workhouse have attracted attention by performing a spirited cover of ‘Pick a Pocket’ from Oliver in their live sets. That and their choice of band name should give you at least some idea of where this quirky London band’s main interests lie. Their self-named brand of folk ‘n’ roll is occasionally spiky, sometimes upbeat and has the cheeky charm of a stage school pick-pocket. However, like the kid who learnt their craft at stage school, their performances often seem contrived and try too hard to impress, rather than just tapping into a natural talent. The five tracks on ‘Sneaky Peekers’ – the band’s second release – are lo-fi and hard going, but nothing if not spirited. Not that those high spirits will help at all should Lionel Bart’s estate come knocking – in that instance, they won’t have the Dickensian orphan’s song(s) to fall back on for too long should those guys get wind of the live show…

This musical hybrid might be a quirky direction for the band, but whether it all works or not is open to question. Opening track ‘Giant Slayer’ begins with a rehearsal room sound, as a walking bassline and live sounding drum provide the backbone of a reasonably jazzy arrangement, the space in the recording adding the necessary swing. Mel Dayna’s voice comes across as a little forced, a faux cockney trill accenting her delivery…and shifting into a punk paced chorus, things don’t improve. For that chorus, the band – in a style best described as old music hall meets street punk intonation – repeats “I’m all right Jack, pull up the ladder” as often as is necessary for this to become especially annoying. Delving deeper into their London suburbs, ‘Kilburn High Road’ bristles along with a solid rhythm guitar line (that lo-fi production masking its better elements) and a spark which often shows – if nothing else – this band have a camaraderie and energy about them, before the lyrics and vocals provide another unwelcome distraction. Once more, the performance has the air of a music hall urchin, albeit influenced by Poly Styrene and Lily Allen. By the middle of the second verse it’s clear that Penny For The Workhouse are so desperate to be different, they just come across like a bunch of irritating little try-hards. ‘Old’, a number mixing up folk, country and a gentle rockabilly bassline, has the distinction of a few nice guitar twangs and flourishes and with Mel attempting to sing in a more proper fashion, everything is preferable to what’s gone before…only to be derailed by a chorus that sounds like a bunch of stage school kids taking the piss out of old style country. It all adds up to something that’s questionable in so many ways and even manages to be even less enjoyable than the first couple of numbers. This is just horrible.

‘Willow Tree’, another folky number, had the potential to be one of the band’s best tunes. Combining a solid arrangement with the kind of song writing rooted in folklore, it ties a rock ‘n’ roll twang to a middling stomp, before launching into the purest example of Penny’s brand of folk ‘n’ roll. Recording budget and rough talent aside, the natural tune rattles along rather nicely. The vocals, meanwhile, kill almost everything: Nathan Plant’s lead voice is so off-key it’s painful and – possibly a result of being helplessly dragged down with it – Mel’s accompanying harmony often struggles to stay in tune. Better, the gentle ringing guitars and warm bass at the heart of ‘Smoker at The Window’ revisits the jazzier style of the opener – a great showcase for the vocal, especially in the way the softer arrangement allows room for a gentle curl. Even increasing the volume and intensity for the chorus, it loses none of that shamelessly retro charm. A gang vocal shows off the live sound of the recording, before dropping into a few catchy la-la’s and an eventual indie strut, everything coming to a close in timely fashion. …And all and without summoning up the spirits of Dick Van Dyke, Jack Wild or Eliza Doolittle on a desperately low budget. It’s not enough to save face, of course.

Penny’s attempts at trying something different and not just going down the easy indie-rock route are admirable, but despite this being their second release, they just too often seem unready for the recording studio. As for the bulk of the material, yes, it’s quirky; but, as is often the case, quirky can become irritating if left in the wrong, meddlesome hands…and while there might have been a couple of good ideas here in theory, in practice, the bulk of this release should be avoided.  A bad penny, indeed.