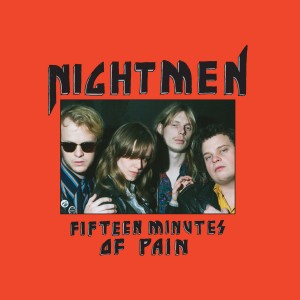 If you imagine the sounds of proto-punk from 1975 transferred via Sweden, you’ll know almost instinctively how this release from Nightmen sounds. This Scandinavian quartet dish up some really honest and authentic music on this audio love letter to the days of New York Dolls and the Ramones’ debut; the twelve tracks crammed into under half an hour showcases the sounds of leather and sweat, with a little camp trash thrown in for good measure. In short, ‘Fifteen Minutes of Pain’ might be heavy on the recycling, but the energy combined with a knack for hooks and riffs makes it an essential listen.

‘Hot Days’ starts with best boot forward, with a trebly riff that sounds a whole lot like the Ramones’ ‘You’re Gonna Kill That Girl’ crossed with ‘Oh Oh I Love Her So’, with a strong focus on a great sounding guitar. A strong chorus is pepped up unexpectedly by a barrage of power pop “woohoos” – the kind more in line with a Shoes record than Joey & Johnny – really lifting the track to a new level. The band’s origins are given away by a slight Swedish twang to the vocal, but it fits the music well and has charm. It’s also only one of three voices to appear on this recording, so if there are times where Nightmen could fall into musical similarities, the variety of voices helps maintain a strong interest. Taking the punk blueprint and driving it headfirst into a garage rock riff, sounding like an unholy alliance between Buzzcocks and The Dead Boys, ‘I Don’t Give a Damn’ is a perfect slab of riffery and attitude, with the band showing off a tight arrangement that’s somewhere between a lightning fast boogie and melodic punk. With a stronger, sneering vocal on hand to give everything a fine send off, this is a terrific sub-two minute workout.

Slowing down a touch, ‘Amanda Lear’ delivers more of a mid-pace while retaining the Nightmen’s already trademark buzzsaw guitar sound, peppering a garage rock back drop with some angular lead work en route; ‘Habits’ brings back the Buzzcocks influence making it more obvious than before with a very brattish vocal, before dropping in an unexpected dual vocal section, while ‘Baby On The Run’ sees Smulan taking a turn at the mic to front some spiky surf rock sounding at times like an unhinged Patti Smith fronting The Phantom Surfers. Each of these numbers shows a slightly different aspect to the Nightmen’s sound – and suggests they could strike gold every time. However, ‘I Need You’, celebrating Phil Spector’s influence over proto-punk sounds, really exposes a weak point. The music, not so far removed from a Ramones slow tune, is fine – not the most inspiring, but fine – but the deep vocal, presumably chosen as light relief with it’s comedic croon, doesn’t work so well. Stretching out a little more, ‘Down & Out’ presents a few things almost absent from other tracks: there’s a cool Cars-esque riff, some slack Replacements influenced backing vocals and a fairly wobbly guitar break to entertain, but it doesn’t quite hit the mark in the expected way due to clocking up over four minutes’ worth of the album’s (already short) playing time. It might’ve worked better at half that length, but on the plus side, nobody could accuse The Nightmen of filling a disc with the same repetitive material…

Potentially the best of the bunch, ‘Tonight Is The Night’ mixes punk, rock ‘n’ roll and glam in a way that owes almost everything to David Johansen and Syvain Sylvain. Although the Ramones inflected material is totally enjoyable, it’s perhaps when taking a brief foray into rock ‘n’ roll territory that Nightmen sound at their most natural. In terms of resurrecting a retro style, they hit this sound faultlessly at every turn. If you’re not convinced by now, you never will be, but as the garage punk of ‘Go Go’ hammers through at breakneck speed – again, allowing Smulan’s best naturalistic talent to shine – and the Beserkley label-influenced ‘Beach Party’ taps into some raucous power pop, the album edges ever closer to becoming a “must have”.

Like the great garage rock and punk LPs of the past, ‘Fifteen Minutes of Pain’ crams a lot in to a short time frame, ensuring a largely energetic performance. The Nightmen mightn’t be shy in sharing their love for the Ramones and other CBGB allumni within the twelve songs, but it all results in a fun listen with a timeless appeal. This might just be one of 2016’s best discs.