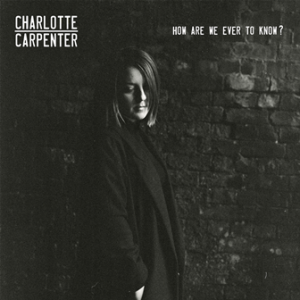 “You’re not my real love…I don’t think I can love no more…”, cries a soft voice, providing the main hook for ‘Last Love’, a number dedicated to moving on, maturing and the realisation that things rarely last for ever. For those familiar with Charlotte Carpenter’s work – and particularly her ‘Fault Line’ EP from 2015 – these stark words will not surprise. The themes of growth, broken relationships and inner strength have so often seemed central to her work, but never more so than on her 2016 release ‘How Are We Ever To Know?’, its questioning title so fitting for the short collection of poignant outpourings.

Her best song to date, ‘Burn’ is incredible…and incredibly sparse. Armed with an electric guitar, a little reverb and a jazzy tone, Carpenter is laid bare emotionally with none of the rhythmic hardness that can so often mask a lyric. Adopting an almost mumbling style to suit, the performer is in great form with sadness seemingly creeping through each line. Things slowly unfold and when the protagonist reveals this scenario was of her own making – as opposed to being born of the more traditional lover scorned – the sense of honesty is just spellbinding and the revelation of catharsis rather than anger gives it a real strength, Carpenter, of course, tackles these themes with a gentle and thoughtful manner, closer to Lana Del Rey than any of the angry song writers that took root throughout the 90s…and with just soft chords and other weeping guitar sounds at hand, it all comes together to create a near-perfect track.

The rest of the EP could be in danger of playing second fiddle to that, but the other four numbers have plenty to recommend them, too. ‘Contracts’ at first presents a similar, echoing and stark backdrop, often allowing hushed vocal tones to do their bidding before a darker chord progression provides a stronger backbone. There’s a feeling that more will happen, but Charlotte never rushes, never allows the listener in completely, increases the tension with each passing bar…and then a bass drum and louder guitars push the number into a great climax, with the pay off that the relationship in question should never be viewed as a done and dusted forgone conclusion. Turning up the guitars and bringing in a bass drum earlier for a solid rhythm, ‘Electric’ shows more of an extrovert at play, it’s reverbed and almost bluesy rock style much closer to material from ‘The Fault Line’. A brief slide guitar solo and unwavering thumping rhythm lends everything an almost radio friendly appeal – and a much bigger focus on chorus hook ensures it’s something you’ll remember once the EP has ended. It might never seem as deep as its counterparts, but it’s still very enjoyable.

‘Am I Alone In This?’ suffers a little through too much repetition of the title, but the arrangement is stellar, presenting a wistful voice against a thudding tom and loud bluesy guitar on the chorus, but also really capturing the imagination on a more reflective verse. On those verses, the quiet voice and muted guitars drip with retro cool, as if Carpenter were channelling Gemma Ray, while brief instrumental sections full of heavily twanged guitars reinforce the terrific bluesy overtones. Stretching the elements of light and shade to their utmost throughout, musically, the grittier style more than offers enough charm to win over its audience, even if this number is home to one of the weaker lyrics. Returning to the theme of relationships, the aforementioned ‘Last Love’ plainly sets the tone for post break-up reflection; if it feels as if we’ve been here before lyrically, a strong musical arrangement means it stands alone. Clean-ish guitar lines collide with some dark and slow piano chords, but it’s the jazzy vibraphone lurking in the back which really appeals. Pushing the song from quiet beginnings into a great crescendo midway shows a pleasingly turbulent quality, while the closing verse’s retreat into a more pensive mood brings out the best in Carpenter’s vocal style.

These five songs dig further into Charlotte Carpenter’s inner thoughts and talents than ever before. The very low-key nature of the material makes this the perfect companion to ‘The Fault Line‘ while demonstrating ever improving song writing and a the workings of a mature heart in a youthful spirit. This is the sound of a cult star in the making.