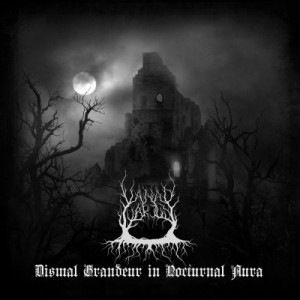 The opening number, ‘Tume Kamber’, gives half an idea where their interests lie. It’s an arrangement where, after two huge guitar chords, a wispy droning sound provides a backdrop. It’s a sound that rarely seems to waver in its musical course, sounding like a score for a low budget horror flick; it’s only occasional and harsh guitar notes, repeating a simple musical motif, that gives the listener any reason to cling on. It’s almost like ecperiencing the extreme metal version of Robert Wyatt’s piano during ‘1/1’ on Eno’s ‘Music For Airports’, but without the grace and hypnotic wonderment. After four minutes of this, an ugly and shrill chord punctuates everything – potentially inducing a premature heart attack due to its unannounced arrival and volume. With that, comes some drums, pounding very slowly and, eventually, an echoed voice that sounds like a distant, distorted train station announcement. With everything settled at about eight beats per minute, the lead guitar throws out some sharp noises – hard going with such a stark backdrop – but then, a measured beat comes to its rescue. …And then, a vocal hisses and spits like your average black metal record. Although at half speed, this track finds it’s feet at a point where everything sounds not to far removed from a lot of black metal. More to the point, it’s not really ambient; anyone using this as a mood enhancer in a background music style has a specifically limited listening spectrum or a very warped mind.

‘Winter’s Dawn’ spends an eternity presenting what sounds like half-formed music, performed by a man clanking on a church organ while the wind from a 1940s horror movie appears to blast up his cloak and cause him a bother. At least that seems to be the reason why his keyboard work is so atonal. On the plus side, he’s also got a hooting owl for company. If you can make it through that, some shrill guitars bring more sounds inspired by horror movies, before the rest of the band chimes in with heavy marching drums and a full gamut of scratchy vocals. Again, it’s much slower than most metal of its kind, but it’s also incedibly loud and rather intrusive. The track’s not a dead loss, though: during an instrumental moment there are the presence of acoustic instruments. Although the guitar work isn’t so flashy, the quieter mood is one that’s appreciated. More quiet aspects to this number would have been good. At this point, though, it’s fairly obvious that Vanad Varjud are only teasing about their ambient affinities, as the metal comes striding back in with a force. So, aside from the odd drone here and there, the only thing that passes as ambient are the aforementioned owl and some wind chimes. Hmm.

‘Dismal Dusk’ takes a left turn at first with a loose drum part that’s blessed with a heavy jazz influence. That, in turn, is half smothered something that sounds like a reedy brass that wheezes with uncertainty as if being approached by someone without any training, while a small child clanks on an unsupervised piano. The recording is poor; this is all coated by an odd hiss that sounds a bit like someone has recorded the sound of an electrical appliance whirring. To be fair, this definitely is on the ambient scale, but seemingly aware of there being too much quiet, the band then throw themselves headlong into an arrangement that’s made of the purest black metal: pneumatic drums, shredding guitars, scary vocals…the full works. If that’s what you came for, then that’s fine, but there are others out there doing it better. ‘Gloomy Sunday’, meanwhile, offers weird chanting, more sounds of extreme weather and a deep organ drone, all of which adds up to being (potentially) the best thing about this challenging recording. The arrival of chiming guitars, churning out a scale that descends and then ascends, seems more of a musical exercise than a genuine riff, but beneath that are some reasonably gothic touches which, again, put the bulk of the first three tracks to shame. The result is a half-decent marriage of extreme goth and black metal textures and is clearly where the band’s best strengths lie. If only they’d stop experimenting with other half-cocked ideas and concentrate on this kind of thoughtful black metal, then this might have all turned out for the better.

A surprisingly long album with it’s four tracks clocking in at almost fifty minutes, ‘ Dismal Grandeur In Nocturnal Aura’ is somewhat of a slog to get through. It’s only really palatable when approached one track at a time and even then, it really tests listening patience. Some people might want to listen to this, but for most, there are countless great albums with which you could fill the better part of an hour instead…