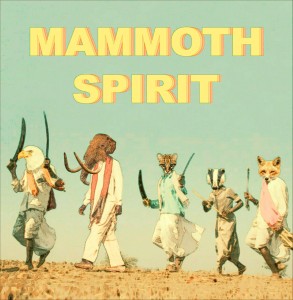 Throughout 2014, Brooklyn based garage rockers Greasy Hearts were phenomenally busy. Between May and December that year, they issued three cassettes and played a number of live shows. There was talk of another release in 2015, but nothing materialised and then at the very end of the year, three Greasy Hearts members resurfaced as part of Mammoth Spirit, a more complex band trading in the much of their straight up garage stance for an unpolished hybrid of blues, funk and retro psych sounds with an old soul.

Never more is this old soul more forceful than on ‘The One (That Goes On Forever)’, a tune with a huge bluesy riff. A deep groove is overlaid with choppy guitar work and a vocal that sounds like a wailing Black Crowes affair, creating a hard and solid sound that sustains the bulk of the track. Peter Wilderotter’s voice, tempered with a distinctly wobbly edge, sounds almost nothing like that voice from the Hearts, but it’s a great match for the music, something that becomes ever more obvious as the track progresses. With a big riff underpinned by unexpected cowbell noises [more cowbell!] this number moves along nicely, but gets even better once the band decide to delve into a grumbling instrumental section, creating something like one of the freakouts from a live version of Traffic’s ‘Pearly Queen’. Taking the busier edges of their sound, ‘Not to Reveal’ musically sounds like an outtake from Talking Heads’ ‘Fear of Music’ at first, driven by Dan Roehrig’s angular guitar style and Gabe Katz’s busy drumming. However, it’s a track comprised of two distinctly different moods, as the fun funky workout takes on a more gravelly and bluesy stance once the vocal appears. Wildrotter’s voice is occasionally hard going, but retains a real presence as his scratchy yelps and wails set about challenging the listener. With his voice in full flow on the slower moments of the track, there’s no restraint in this performance, but backed with an offbeat band, it all adds up to what becomes a very quirky track. With a strutting beat and superb bassline, ‘Taking The Fall’ sounds more accessible for the briefest of moments. However, someone has decided that a really distorted keyboard sound should accompany everything and it quickly becomes an irritant. In another odd move, the melodic edges of the music are hampered farther by a shouting vocal that sounds like the output of a man who’s suffering. The only redeeming feature is the deeper guitar riff creeping in from time to time, displaying a love for lots of great 70s rock. As that takes over, churning out a repetitive, slow-ish riff to close, Wilderotter finally decides upon a more palatable approach to singing and it’s clear that this track hasn’t all been in vain…but, man, it’s certainly a hard listen.

It’s on the EP’s second half, however, the best material appears. A thousand times better than all of what would have been side one in old money – and reason enough to check out this EP – ‘Exploration of Mind’ has the heartbeat of an old soul tune, with Patrick White really pumping the hell out of his bass. Sounding like a loose jam on ‘Keep On Running’ or something by Sam & Dave, the pace is superb, the reintroduction of the distorted keys making much more sense and the untrained vocal, too, sounds cool – edgy, yet heartfelt. Hearing the possessed vocals and the pumped rhythm section in this way, it brings out the potential in Mammoth Spirit more than all the other tracks combined. Imagine a demo for something left over from The Computers’ ‘Love Triangles‘ LP, and you might have half an idea of how this sounds. Similarly, ‘Speak Up When I’m Gone’ features some great rhythms – again, with White arguably being the star – while some very old school keys noodle in a spooky manner. Holding it all together, Rohrig’s guitar work leans towards the bluesy, occasionally delving into something angrier, darker and distorted, really hitting the mark during a fuzzed up solo. Wilderotter, meanwhile, occasionally struggles with some vocal demons, but the spooky nature of this number ensures he doesn’t ever sound as out of place as he did on ‘Taking The Fall’.

It seems fair to say that liking the Greasy Hearts material doesn’t provide a cast-iron guarantee you’ll get on with this, but the five songs that make up their debut EP still possess a retro style that’s played with a carefree passion. Not all of the material works, but when it does, Mammoth Spirit – both the band and EP – can be fuzzy and fun. The more spacious approach of the material never quite summons up the need to sweat it out in the same way Greasy Hearts demands, but then, what’s the point in a side project if it doesn’t break new ground for the musicians involved?