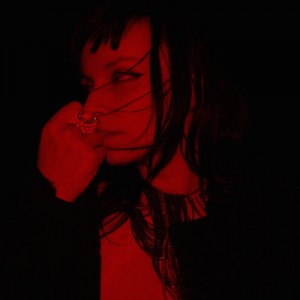 The lead track ‘Bathing’ shows Woods at her most stark, with her wistful voice placed over some deep waves of electronic sound. A keyboard works alternate chords, playing a tune slowly, while a bass note chimes in between each bar. To take focus away from the minimalism, occasional piano lines drop in a quirky musical hook, only then to disappear back into the shadows. Hearing it all together, the tune is lovely, but it’s Woods’ voice, sitting in the centre of everything that slowly draws in a keen ear. Quietly, her voice delivers each line in manner that allows the lyrics to unfold slowly…wistfully…softly. Pretty quickly, the tune asserts itself as a more electronic take on the works of Julee Cruise…and with this EP released at the tail end of the filming of a resurrected Twin Peaks, the style seems oddly poignant.

The title track follows with heavy sounds that at first appear like a more cinematic version of the early works of Jean Michel Jarre, but with the addition of an even heavier track, the music quickly asserts its more of own identity. The ensuing dream pop swirls and pounds, using a high pitched bassline as it’s core sound, along with Hilary’s voice appearing even slighter than before. This is great, but at the point of climax, where the arrangement swirls into a louder and moodier affair, it somehow becomes even better, especially in the way it leads into a wordless journey through alt-pop influences. In terms of dream pop, this is very fine indeed.

‘Sabbath’ – feeling very much like a companion piece to the previous release’s ‘Secret Sabbath’ – drops all the darker elements to allow the piano to become the main focus, but this marriage of voice and keys never feels like standard singer songwriter fare. That’s largely down to a soft electronic backdrop, sympathetic to Woods’s preferred style of delivery, letting go of a few words at a time, almost as if she has become detached from not only the music in hand, but also removed from the realities of the every day with her questioning and hushed voice. As before, the number eventually finds a climactic space, this time making more room for a slowly pounded beat and increased volume in almost everything.

Those who’ve followed Hilary’s career have much in which to immerse themselves, despite ‘Heartbox’ only featuring three tracks. The removal of acoustic strings has led to the creation of something quite different to ‘Night’, yet at the same time it’s dark and shadowy tendencies seem like a perfectly logical musical continuation. For dream pop lovers and those who like to dabble with a more miminalist electronic sound, this EP comes highly recommended…whether or not you ever cared about the performer’s previous band.