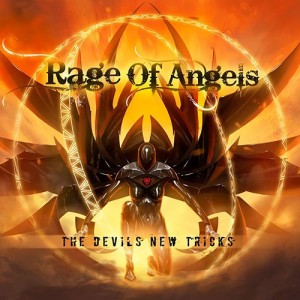 Almost three years on and after road testing some of the material, Rylands returned with a second Rage of Angels LP at the beginning of 2016. For this sophomore release, however, he made a big change. Whether that’s one for the better will be down to personal preference: the variety of voices from the debut has been replaced by the work of a single vocalist, ex-Saga man Rob Moratti. Rob was last heard peddling a bunch of Journey covers, karaoke style, on a low budget release that was no better than royalty free supermarket music, so ‘The Devil’s New Tricks’ represents a huge step up for him. For Ged, it potentially represents more of the same. It was hoped that he would look at previous work and scale things down, maybe truncate the songs for a bigger impact; but no, by and large, ‘The Devil’s New Tricks’ suffers from that same flaw as its predecessor in that some potentially strong four minute songs eventually become weaker six minute bloaters. To be fair to him, though, the song writing is actually much, much better in places this second time around – he’s actually treated us to some memorable choruses for starters – and that alone makes this a superior effort.

One of the stand outs, ‘Love Will Never Die’ is of the solid and enjoyable AOR mould. Bell-like keys bring a late 80s sensibility to the arrangement, while chugging guitars bolster the lovely mid-pace. The lead guitars sweep and soar with a timeless beauty and Moratti’s lead vocal – despite sounding like a man sucking on a helium balloon and then impersonating Steve Perry – is perfect for the job in hand. Factor in a world of harmony vocals and it sounds like Ten reworking something from 1989. In other words, it’s pretty much all good. It doesn’t need to be seven and a half minutes, of course, but despite this, there’s a great deal for melodic rock buffs to get excited about. Likewise, at the other end of the scale, the title track opens with deep drums and a wash of Hammond organ, over which even more keyboards are laid. …And then: still more keyboards, wandering into widdly pomp territory. With the band exploring a full rock sound, the effect of hearing Moratti wailing atop a Rainbow inspired melody gives the impression that this might be one of the best tracks Yngwie never recorded. Once Moratti starts forewarning of “storm clouds gathering in the sky” and how “evil has to fail, so that justice can prevail”, it borders on the silly – but of course, it’s all in the performance…and everyone here goes at the track with real gusto. It would be improved with some trimming and bringing in the guitar solo a chorus or two earlier, but for what it does, it’s decent enough; not to mention as punchy as hell, too.

An essential tune, ‘What Matters Most of All’ kicks off with some clean, stabbed keys in the classic AOR tradition and a killer lead guitar, before dropping into a tune that sounds like something you’ve heard a million times, but somehow still manages to sound utterly appealing. Borrowing a little from Journey‘s more upbeat tunes like ‘Be Good To Yourself’ and something from an 80s soundtrack, it’s almost every reason why you like melodic rock. Well, almost… Moratti’s voice occasionally becomes a little too intrusive in places, but in some ways, given his preferred styles, it was to be expected. It’s also worth noting that Moratti’s creative input is so very clear – there was nothing on the debut as classic sounding as this. Also well worth a listen, the AOR inspired ‘All Your Own Way’ has some superb elements: the soaring lead guitars are among the best on the album; the softer parts of the track allow Rob to croon and cry without over-emoting; the harmonies are superb and the chorus is decent. In the hands of a better band, it might be a classic, but here, it falls just short of the mark. The drums are odd sounding – and occasionally sound flat like they’ve been culled from a demo – and for some reason, especially during the intro, Khalil Turk’s production isn’t as sharp as perhaps it ought to have been. Still, trying to overlook the fact that this, too, comes with at least two minutes of filler to bring it up to Ged’s preferred six minutes, there’s a reasonable tune trying to escape.

‘Long Days Without You’ pushes everything towards a power fisting quasi-ballad, on which, naturally, Moratti sounds very much at home. His Journey-esque voice drops into something deeper, and while not a croon per se, is certainly more palatable than his higher registers. Complimenting his lead, the harmony vocals are surprisingly understated and a couple of key changes reinforce the attempts to recreate something less bombastic and more AOR-centric. It outstays it’s welcome by a whole two minutes (why, Ged, why?), but for those who like their melodic rock a little bigger, there should be more than enough appeal, even if this doesn’t quite stand alongside the album’s very best. What should have been another of the album’s best tunes, ‘Strangers In The Night’ ends up with the status of settling for a solid mid-tabler. The verse combines a galloping riff with a slightly bombastic edge, where the rattling pace sums up the best in Rylands’s shamelessly old fashioned approach to melodic rock. Moratti shows he can be a good fit with the full-on sound, but it’s with the chorus, however, things elevate and a big key change, filtered harmonies and decent hook all come together admirably. If it had stuck to a classic AOR verse-chorus-verse-chorus-solo-chorus-out structure, it could have easily been a superb four minute track. However, at the point of a natural end, Ged opts for more huge soloing, musical theatrics and rhythmic stops – almost neo-progressive in the way it aims to show-off – and the momentum is utterly lost. The return of the chorus is a step in the right direction and the widdly lead guitars during the play out are expertly crafted, but there’s a huge amount of padding. Less is more, Ged, mate.

Less fortunate – and easily the runt of the litter – the title track is a lumpy, stodgy, shamelessly hoary old rocker that sounds like something Magnum would have rejected during the making of ‘Eleventh Hour’. The mid pace sounds fine at first, but by three minutes in – and with the arrangement unwavering, almost unchanging – it becomes tedious. At almost six minutes, it’s far too long by half. On the plus side, there are some pleasing guitar motifs, played with a classic, sweeping sound and Moratti is in reasonable voice. ‘In & Out of Love’, meanwhile, has a great hook, but isn’t necessarily given the effortless send off it could and should have been given: the backing vocals are over processed, while a couple of the guitar leads could more than be accused of over egging an already very eggy pudding. For those who like a Rainbow-y influence it might appeal a little more, but measured against the one or two more AOR-ish tunes, Rage of Angels can do better. …And, yes, of course it’s two minutes too long… Elsewhere, ‘Stop Changing The TV’ shows off multiple vocals and slabs of keyboards for a reasonable hard rocker, but ends up a bit forgettable, ‘One Step Closer’ is a reasonable affair let down by more woolly production and ‘I Feel It In My Heart’ has all the rhythmic thrills of a metronome. While these tracks lower the batting average, it’s probably worth mentioning that most of them stomp over anything from the first album.

You’ll find some good songs – even couple of great ones – scattered among the eleven tracks here, but with the album clocking in at well over the hour, hearing them in one sitting can a detrimental effect, as the big style has the potential for ear fatigue. Looking at the tracks individually, though, it shows Rylands to be a man capable of cooking up some decent melodic rock ideas, even though he seems incapable of arranging them succinctly for maximum punch. Despite these flaws, this album is more than worth hearing. If you liked the first album, chances are you’ll love this and if you like Rob Moratti and can take helium voices over prolonged periods, you’ll be in your element. Just don’t always expect melody over bombast and you’ll be fine. ‘The Devil’s New Tricks’ is about fifty times better than ‘Dreamworld‘, but then it had to be. If only Rylands could’ve got into the mindset of creating shorter songs, it might just have been a contender for being one of 2016’s melodic must-have’s. If only, indeed.