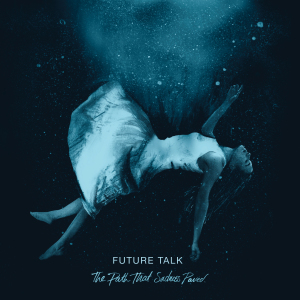 2015 saw a lot of alt-rock bands with a slight emo slant breaking through, particularly in the UK. Few are as impressive as Gloucestershire-based quintet Future Talk, a band whom seem to recognise that huge melodies are equally as important as musical prowess. The band’s appeal is also very much helped by the fact that the four songs on their ‘The Road That Sadness Paved’ EP have less of the sheen and fewer vocal filters than is often associated with acts of a similar style.

The EP begins with a most typical offering for their chosen subgenre. Chosen as a single, ‘Sleeping Pills’ is perhaps the most accessible number straight off, with a wall of sound riff dominating. The twin guitars of Jay McQuilkin and Jack Cadenhead bring a very full sound, complimented farther by a great production job. In terms of alt-rock, this ticks all the right boxes for sure, but is perhaps a little too predictable, given the amount of bands churning out similar sounds. Between the riffs and relatively hooky chorus, things occasionally quieten to allow vocalist Alex Taylor to experiment with melodies that are a little more emotive and it is here, more than ever, we get a glimpse of a band with a bigger potential. Teasing with a little atmosphere, ‘Shadow Poet’ begins with a quiet and unaccompanied guitar, the clean notes leaving listeners unsure of what could follow…and then, both guitars kick in, with the drums adopting a fairly predictable sound – heavy-ish, though melodic, the kind of thing you’d find on any number of twenty-first century alt-rock releases. Again, this is okay, but it’s with the arrival of the chorus things take a leap, as Future Talk branch out, with McQuilkin overlaying the riff, with a noodling and almost math-rock lead. This combined with the simplicity of the vocal melody brings a superb contrast, before an all-too-brief instrumental break adds a slightly more angular noise – a sound that owes as much to Arcane Roots and latter day Bring Me The Horizon, as well as the parts of Issues that aren’t spoilt by R&B oddness. This is great – and, honestly, sounds greater with every subsequent play.

The EP’s strongest number, ‘The Cliffs As A Reminder’ really captures the band’s sound in an impressive manner. As before, the key riffs are sizable, but here they come coupled with a hugely melodic chorus, a hook that sounds as if Mallory Knox tackled one of Fall Out Boy’s least smug refrains. The bulk of the end result combines the best elements of the previous tracks, but shoehorns in a more complex arrangement. The math-rock leads are back with a vengeance, but this time around bassist Mitch Potts carves out a much bigger role, as the great production allows him to desplay a great sound throughout. He particularly excels during the second half where he drops in a lead bass rattle that’s got a real spirit. With the shifting time signatures and moods, their broader talents become obvious: drummer Max Elderfield, too, gives a great performance, shifting between toms with a hard rock power and more (almost) funky beats, complimenting the bass excellently. Last up, ‘Fear Life’ is slower and more moody, though not necessary any less quiet, with the twin guitars chugging intermittently over a measured beat, where Elderfield occasionally sounds as if he’s channelling Bowie‘s classic ‘Five Years’. Finding its feet, the number then blooms into a huge hook, which – much like ‘Cliffs’ – proves that Taylor knows his way around a melody. Working a strong alt-rock arrangement, the guitars chime against an emotive vocal, but it’s with the mid section Future Talk surprise, as everything falls away to reveal an almost ambient bass and tinkling guitar. The more atmospheric verses make this track just a little more slight than ‘Cliffs’, but again, the arrangement is thoughtful and well executed.

‘The Path That Sadness Paved’ may not be especially big on variety or originality, but constantly shows Future Talk to be strong players, particularly guitarists McQuilkin and Cadenhead. In terms of alt-rock, the arrangements really hold up throughout and the production sound gives the feeling of a release that’s far more established. The result: a highly recommended listen.